It is weird how things work. The day after my baseball season came to a close I had a chance to make some football photos. It was a scrimmage so things are harder to photograph, but it was still fun getting out there to make some photos.

A scrimmage is tough to photograph because you cannot predict things as well. When a team has fifteen plays to run they do things differently than if it were an actual game where they need a first down. Obvious passing plays are not always so obvious. Part of doing stuff like this is so that I can get some practice in as well. Part of that practice is trying to guess the play. That is harder here, but still fun to try and get right. 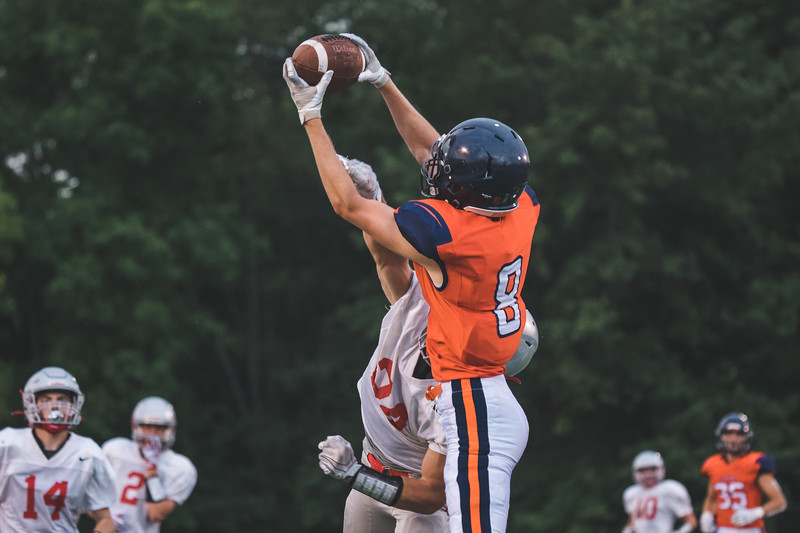 Just like the players on the field I wanted to work on some timing myself. Here I was able to get the quarterback releasing the ball and the catch. Photographing baseball and football are two different animals. It was good to get some reps in before things get more intense in the coming weeks.

By the time this post goes live I will have already photographed a Purdue soccer match. This fall is still sort of up in the air. Dates are filling, but there is still some wiggle room here and there. Saturday is a good example of how quickly things can change. I had planned to photograph the Harrison soccer matches, but the Purdue job came in. My equipment does not pay for itself so I have to go where the money is. This fall though I would like to try and do what I did with baseball. I would like to photograph at all of the local football stadiums in town. That may not be possible with limited Friday nights, but it will be fun to try.

Here is a link to my gallery from the scrimmage. It was a fun hour or so of making images. I do not know who is in town next Friday night, but I would love to do it all over again.