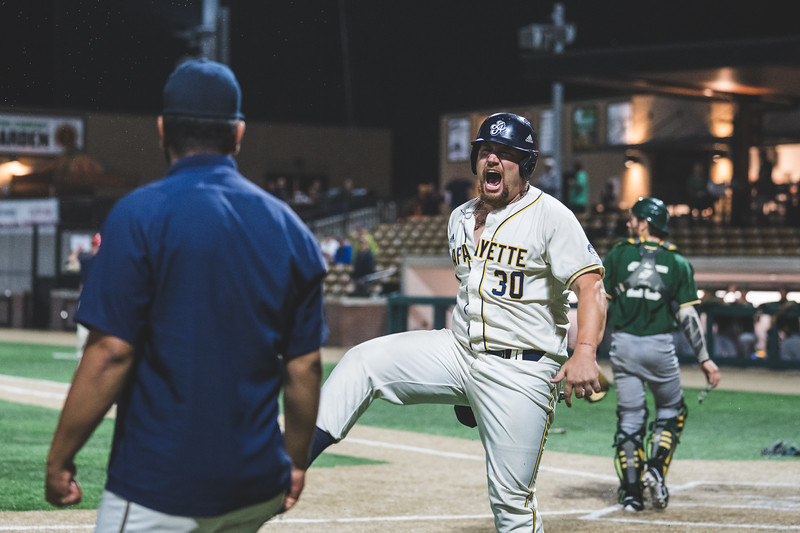 One Last Game At Loeb Stadium This Year

Thursday night I was back at Loeb Stadium for one last game with the Lafayette Aviators. It was a winner take all game three of the championship series. In the end the Aviators came up short, but that does not diminish from the amazing season that they put together. The boys put up an amazing fight, and even had the winning run up at the plate in the bottom of the tenth. It was not meant to be though. The best part about this team is that they never gave up on themselves. They were always in every game. Even after a terrible call put them in a bad spot in the tenth they kept fighting. That was the best part about covering this team. The late game comebacks meant great images.

As Close As I Will Come To Babe Ruth

This season we had a special mid season surprise when Jayson Newman joined the club. I was not at that first game, but he belted the game winning home run if I remember correctly. From that point on you had a guy on the team that was a must watch. He would hit dingers all game long, and then come in late as a pitcher and close out the game. It really was fun to watch, and I don’t know that there is a thing that he couldn’t do on the diamond. Above you can see him applying the tag to a runner trying to steal home after a ball got away from the catcher. Jayson made a very athletic play to catch the ball while getting his body into position to block the plate. This play kept the Aviators in the game and gave them a chance to win it.

I had this idea for a crazy multi-exposure with Lafayette pitcher Jorge Oleaga. He has a great motion, and I wanted to see how it looked all together. It is a little messy here, but at the end of the day it is something different and cool. I don’t know if more Jorge is a good idea, but here it worked out very well.

The way that things work for me and what I photograph this was possibly the last baseball game of the season for me. If you know me then you know that I love baseball. This has been an amazing baseball season full of very cool experiences. After no baseball in 2020 it was great to get out and photograph as much as I could. After 2020 I learned to take advantage of what is in front of you. I tried to make the most out of every baseball game this year. I hope to do the same with the fall sports that are coming up. I am sure that a couple of best of galleries are coming up from this baseball season.

A Familiar Face Wins The Title

When the game was over I was not really in the mood to photograph the trophy ceremony. I was pretty invested in the Aviators. Watching another team win hoist the trophy was not what I wanted to do. I saw former Indiana State player Ellison Hanna ready to grab it though so I walked over to make the photos. I have covered Ellison for a while now, and it was fun to watch his joy as he hoisted the trophy.

For this game as late as it started I decided to travel light. I had my 12-24mm lens and my 70-200mm lens on me. I was more concerned with the emotion and action near me for this last game. I hoped emotions would be high, and they were.

You can see my full gallery from the game here. This has been a fun year putting these things together, and hopefully we can do it all again next year.