A Brant Wonders Into Lafayette

I always wonder why a bird that is never in the area suddenly decides to show up here. This lone brant has spent about three days in Lafayette as of this writing. This bird you would think should be part of a flock and probably not here. It was still cool to see it even if it was next to a busy highway. This bird decided to hang out next to highway 52 in town. The busy road did not provide calming sounds as I made these photos.

If you had told me when I woke up on Valentine’s Day morning that I would find myself laying in the snow with a below wind chill wind blowing in my face to photograph a type of goose I would have told you that you were crazy. This was a cool bird though that I am not sure will be back in this area. It was a once in a lifetime opportunity to make some interesting photos. 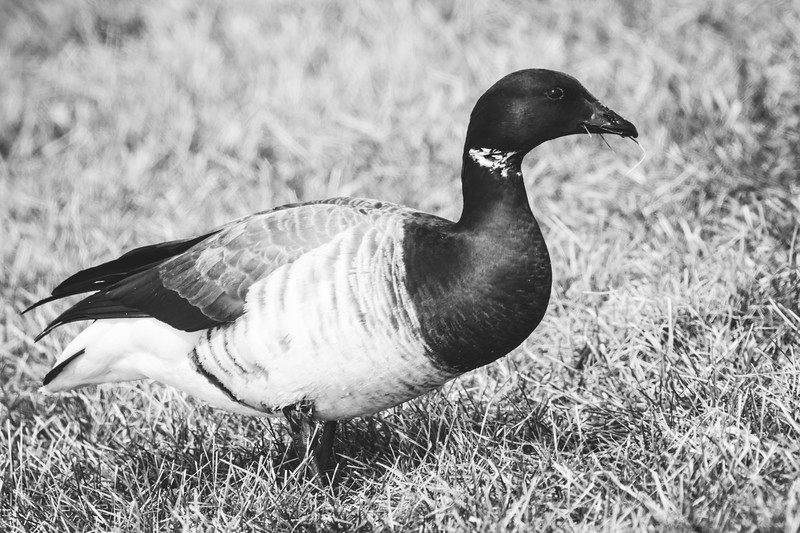 It was pretty cold out when I was making these photos. That doesn’t bother me so much. What I found though was when the sun came out it warmed up the ground enough for a little heat shimmer to occur. If you have ever photographed on a turf field early in football season you know what this means. I was initially on my stomach making photos, but I realized that the shimmer was ruining them. I moved from the grass over to the snow to limit some of the shimmer. I also slowly moved a little closer to the bird to cut down on the distance. If you are just cool and not crazy you can get fairly close to the bird. This was a fun challenge early on my Sunday.

Getting Enough To Eat

One thing that I worried about when I heard about this bird out of its environment was whether or not it was getting enough to eat. Birds are amazing though, and they tend to find what they need. This bird was getting everything that it needed even though it seemed like a bad location to me. It was perfect for the bird.

A Different Kind Of Brant

When I first saw a report of this bird the name was spelled just like my nephew Brandt. When I went out to photograph the bird I couldn’t help but think of the hockey games that I photographed in 2015 as his Purdue hockey club defeated IU and IPFW and won the ICHC Tournament. It was an amazing two nights of hockey. I would photograph a couple of games the next season and then for some reason not again. I really need to get out and make some hockey photos again. You can read about those games by clicking here for IU and here for IPFW.

A Sad End To The Story

I am running a couple of days behind on the blog. From the time that I wrote this until the time that it will go out the Brant decided to go out onto the highway and was struck by a car. I was really interested in what was to come of this bird. This was of course the worst case scenario. Would it have stuck around or would it have gone back north? We will never know now.