I normally don’t like photographing scrimmages. They don’t have the same game flow that you would normally see. The teams don’t play the same, and you can’t really predict what will happen next. I had a couple of reasons to get out and photograph the scrimmage Friday night though. I had new gear to play with. You always want to shoot anything with that going on. I am also rusty when it comes to football so any practice is good practice. My season starts at the end of the month, and I want to be ready when it comes. 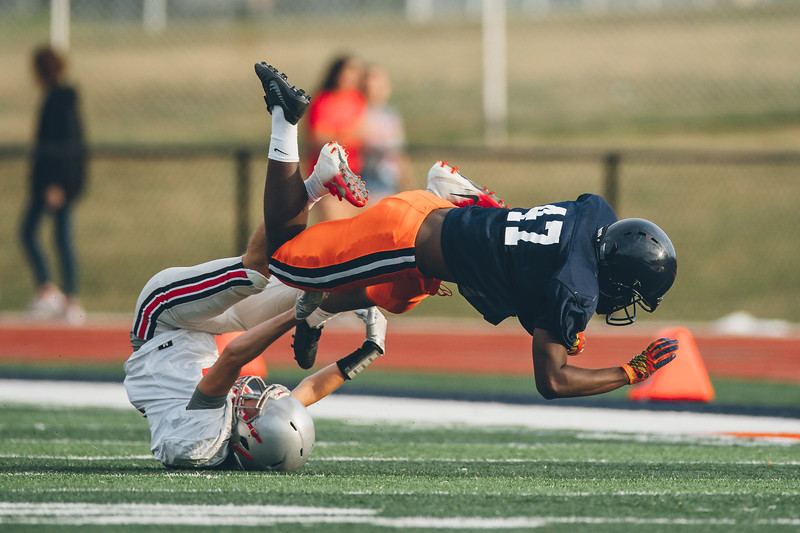 This was my first time out with my new kit. Once I tried Sony the switch over to it was an easy one. My new game day kit consists of Two Sony A9 cameras, a Sony A7Riii, a Sony 24-105mm lens, a Sony 70-200mm lens, a Sony 1.4x Teleconverter, and my Canon 600mm lens. I would love to have everything Sony, but the 13,000 price tag on the 600 does not make sense for me. The Metabones adapter really communicates well between the lens and the camera so it will do for now. As I write this I have a soccer match tomorrow which is another chance to test this stuff out. So far though I couldn’t be happier with the new gear.

Here is my full gallery from the game. At some points I was not sure I should ever photograph again. Then like a switch it started coming back to me. I can’t wait to start photographing these games for real. Next Friday as of right now I have the night free so I may find a game near me to photograph.