Last night I saw what was probably my last baseball game of the year. I love this sport, and I can never seem to photograph enough of it. It had been five weeks since I last saw a diamond. This will be a long winter waiting for baseball to come back, but it always does. This year I hopefully will get even more baseball in than I did this year.

I always like my pregame portraits. I actually did not have anything in mind yesterday, but then I lucked into this one. Sometimes it is fun to act like you know what you are doing even when you do not. 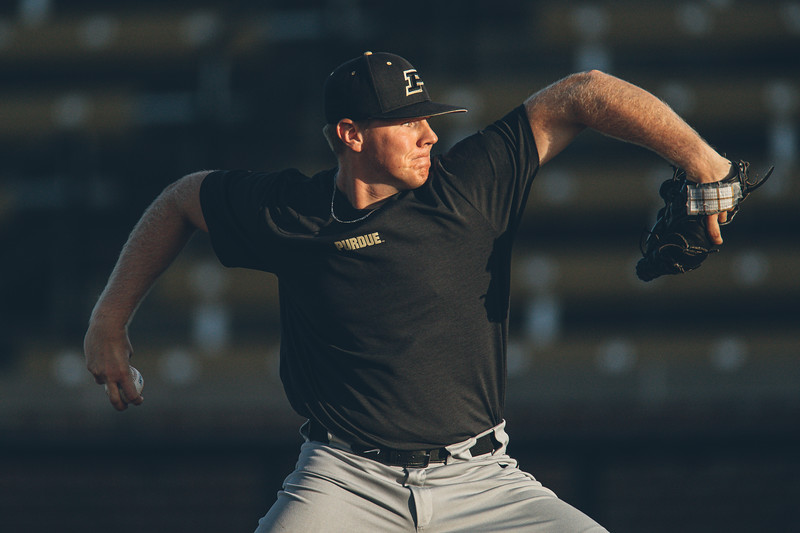 I had some fun during a couple of innings playing around with the different modes on the Sony A9. The camera has a Super 35mm mode which takes your 24mp file and crops it down to a 10mp file. It is effectively a 1.5x crop. I made four sample photos to show you. The first is the camera with the 600mm lens on it and nothing else. The second photo was made with the same setup, and the Super 35mm mode enabled. I cropped the two photos to look similar to see if I noticed a loss in quality with either one. I did not. I think that I would always rather crop the photo in post than in camera. I can see doing it in camera though as the files would be smaller, and faster loading. If you know that you want to be in tight then this is a cool setting. The last two images were made with my 1.4x teleconverter on the camera. The first is without Super 35mm mode, and the second is with Super 35mm mode enabled. You can see just how much tighter you are to the action. This is one of the fun modes of the camera for sure. I don’t know how much I will use it, but it is good to know what you are dealing with.

I am still amazed at how fast the Sony A9 is. Here it is on an older Canon lens talking through an adapter shooting at 22 frames a second. When the auto focus it is not so fast, but photographing a batter doesn’t require auto-focus so I decided to have some fun. These are three consecutive frames showing just how fast this camera is. It really is cheating. Getting a ball in three straight frames is pretty cool. I would love to test this out in good light.

I have really been wondering if I needed the Sony A7RIV. The Sony A7RIII is 40mp and seems to get the job done. The new Sony is $1,000 more than I paid for the older one, and you do get many things with it. The main thing is 20mp more. I was really debating if I do work enough to warrant that. While photographing the game under the lights I saw the banding that I had never seen before. The new model does not have that issue. Right then and there my decision was made. 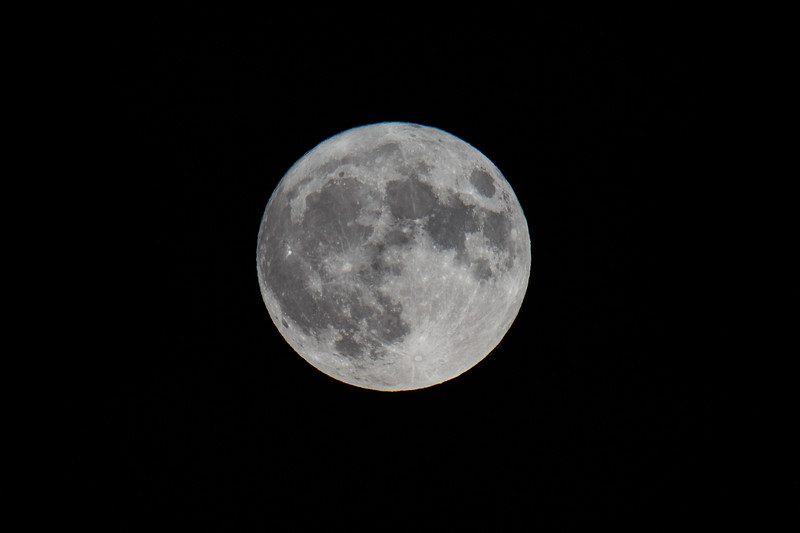 The baseball game was fun to watch, but the harvest moon rising was fun as well. It doesn’t take long to change settings to make a nice moon shot. 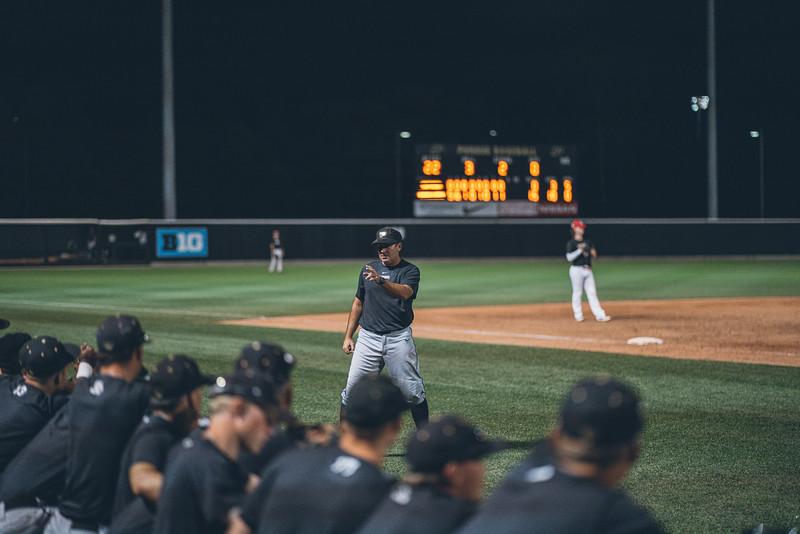 Late in the game I started making photos with my new Rokinon 85mm f/1.4 lens. I know that it doesn’t really work so well on the baseball field, but I think it will be amazing for basketball and volleyball. Here it separates the new Purdue head coach from his players and the background. I can see this lens getting a lot of use. 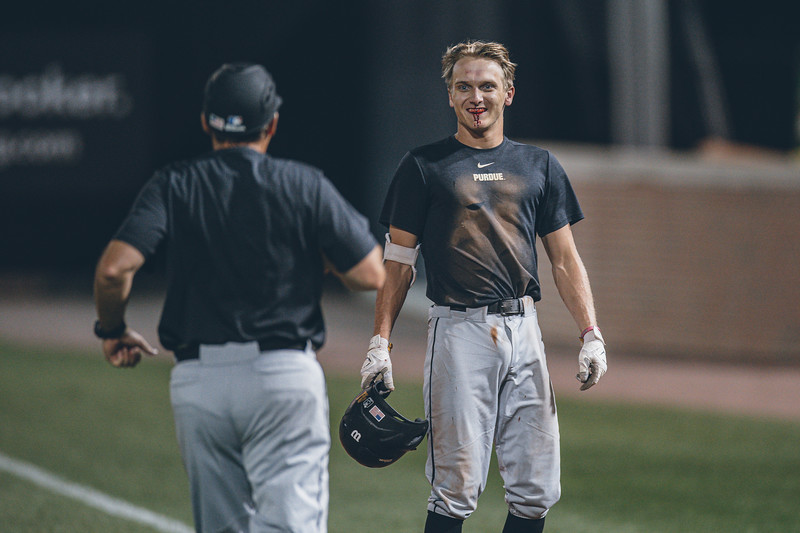 Score One For The Local Kid

I have been photographing a couple of the current Purdue players for a while now. Since the 2014 Colt World Series to be exact. Former West Side player Owen Walbaum saw his first Purdue action last night singling in a run. In the process he ended up a little bloody. What a way to get things going. You can see the toughness though through the bloody smile. This first hit will be a tough act to follow. This was how the team was playing all night though. They were throwing their bodies around, and they were very fun to watch. If this team keeps that energy throughout the spring I think they will have good things ahead for them. 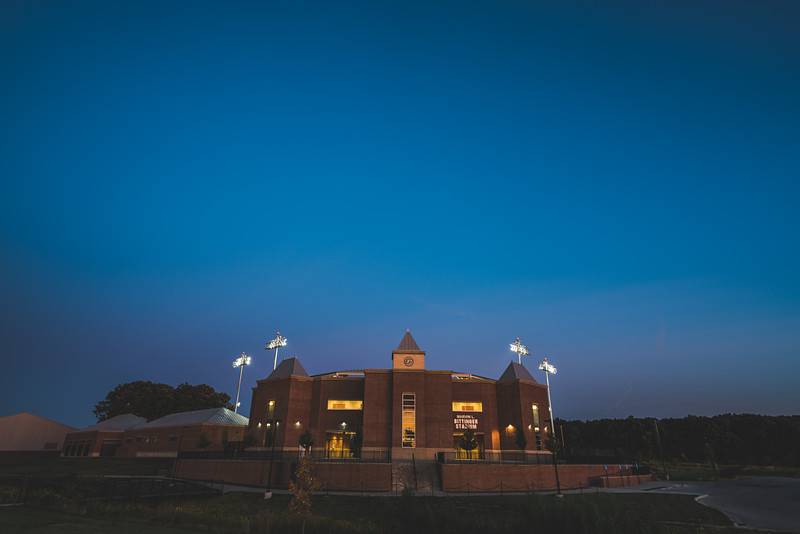 As the sun was going down the softball stadium was looking good with the last rays of sunlight hitting it. Luckily someone next to me had keys to the gates so I could quickly run out and make this photo. I love these new stadiums, and it is always good to catch them in good light. 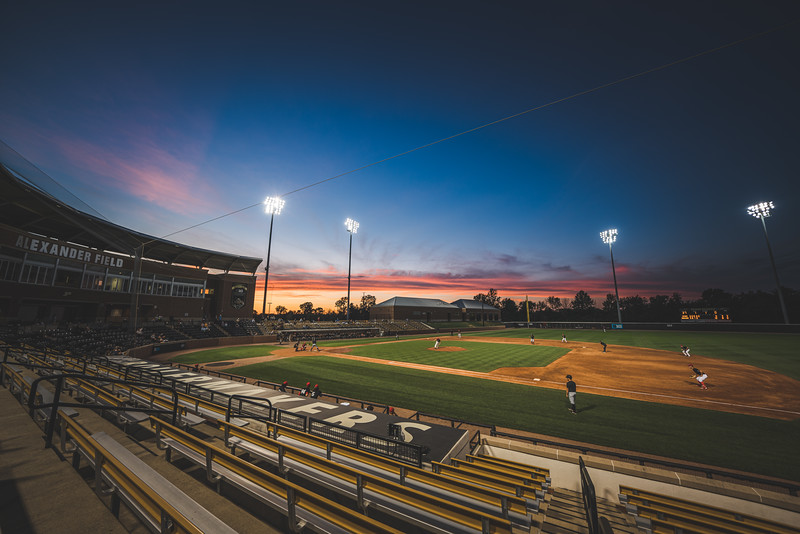 Last night I took in the beauty of Alexander Field from a couple of locations. Early on in the sunset I ran up to the press box to make a photo from up there. I then hurried back down to field level to make the second photo above as the sun was quickly setting. These new stadiums make it easy to make nice sunset photos. Hopefully tonight at the football game we get something amazing too.