Having Fun on Day Two of the Austin City Limits Festival

Day one of the Austin City Limits Festival was all new. Everything was new to me so I walked around looking at everything it seemed like. On day two I walked around more, but it was with a purpose. We saw some great bands, ate some great food, and even had a great sunset at night. One thing that was so great about ACL was the fact that everything seemed very well planned. All festivals go through a long planning process I am sure, but at ACL everything seemed really well thought out. We never waited very long for a bus, no super long bathroom lines, and the festival grounds seemed well thought out. This is the 15th year of the festival so I guess they have it down at this point.

Highlights From Day Two of ACL

The day that I was the most suspect about when planning our weekend was Saturday. I really did not know what to expect when I arrived at Ziker Park. The day started off a little late for us. The first act that I saw was Matt the Electrician. Sometimes you get surprised by the smaller acts, and Matt was one of those. He really seemed to be having fun on stage, and that is what makes an act good to me. One band that I really enjoyed on the day was City and Colour. They played early in the afternoon, but they took hold of the crowd that came to see them. Here is where things get crazy. As a kid I loved LL Cool J. Those that know me now would probably never guess that. I used to sit and listen to Bigger and Deffer on my walkman with the earbuds that retracted back into the player. Yeah, I was that cool. In the 90’s I still kept up with him, but lately I have just watched him in movies and on TV. I thought that his show might have a couple of songs that I knew, but more of the newer stuff that I don’t know. I was surprised when he went old school for most of the show. This was probably the surprise of the weekend for me. After Cool James was done we moved across the festival grounds for the rest of the night. The Naked and Famous put on a good show as did Cage the Elephant. During the Cage the Elephant show we were treated to a small rainbow as well as an amazing sunset. This was one of the times during the course of the weekend that I wished that I had my dSLR in my hands instead of my iPhone. Our day ended with Andrew Bird performing on the Miller Lite stage. Andrew is a musician that can rock it out, or keep you into it with a nice slow ballad. Andrew is amazing at what he does, and it was fun to see him do his work in person.

More Photos From Day Two of the ACL Festival

On the first day of the ACL Festival I took my Canon G16 along with my new iPhone 7 to the show to capture what I could. I was happy enough with the results with my phone Friday that I did not take the G16 for the rest of the weekend. I worked simply with my phone. After day one of the festival a friend hooked me up with the Beta version of the upcoming iOS so I could play around with the new portrait feature on the phone. All that I can say is that the new feature is a game changer. It is not perfect, but it does provide a much better look to your portraits. If you want to see my favorite images that I made last week you can check out my weekly Exposure post here. 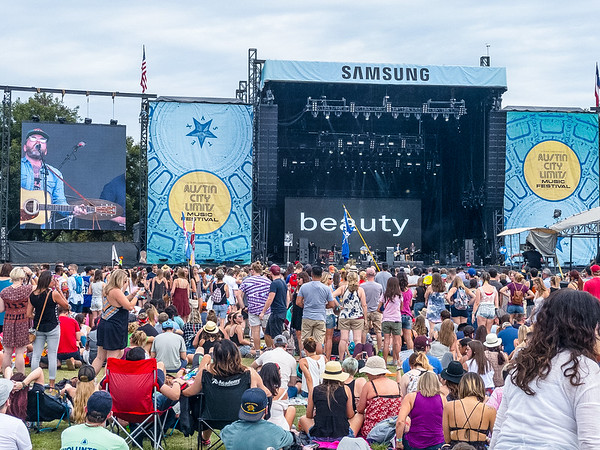