This past weekend I had a very fun assignment. I was tasked with documenting the Sycamores road trip to Minnesota to take on the Gophers. Due to a Big Ten rule change this would be the last time that Indiana State faces a Big Ten team. I have wanted to see a game in TCF Bank Stadium since we drove by it during a baseball road trip in 2009. Back then I never had any idea that I would be photographing a game in the stadium. You really could not have asked for better day to shoot a football game. It was a nice 70 degree day with just a few clouds in a beautiful blue sky. That combined with the orientation of the stadium made for some beautiful photos. This year I have been able to make some great pictures with the people at Indiana State. They have been very good to me, and each job has gone even better than I expected it to. I can’t wait to see what the next adventure with the Sycamores will be.

The First Football Game of the Year

This was essentially my first football of the year. I was able to shoot about two quarters of a high school game a couple of weeks ago, but this was the first game of the year that I was able to cover. I think that I did alright for the first game out of the gate, but I have a lot that I can improve on. Shooting some soccer this year helped as many of the camera switching techniques are very similar. The positions that I like are similar so you have to have very similar moves as the players come near you. Next weekend is all about covering volleyball, but finally in two weeks I will be able to see my Boilers play. I love Saturdays at Ross Ade Stadium, and it will be good to get back there. Football is really just cranking up, and I have a lot of games left this year. It was nice to finally get out and shoot one though. It was nice to be shooting football for something other than the blog as well. It is nice to shoot for the blog, but the knowledge that the school would be behind pushing my football photos was reason enough to go out and make something really interesting. 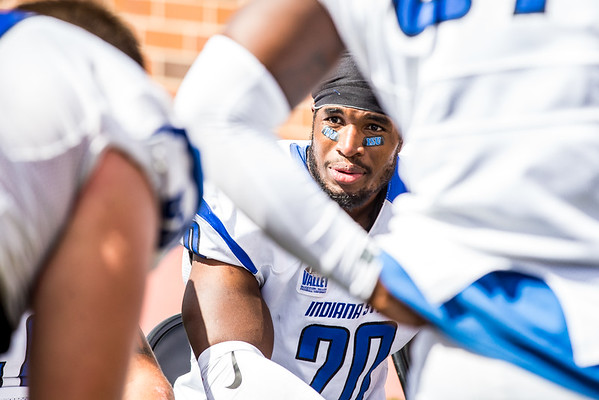 I get asked a lot why I travel so much for my photography. I think that compared to a lot of shooters I don’t travel that much. When I do travel I do so because that is where the photos are. If a major college football game happened in my backyard I would shoot it there, but the backyard is not big enough so I have to go elsewhere to shoot. I really enjoy doing what I do. There is nothing better than looking at the back of your camera and seeing that you nailed the moment. One of the photographers that I look up to Joel Sartore talks about having to leave to make photos. It is not an easy thing to do, but you get pulled into doing it. I have been trying to take a trip like this one for a couple of years now. Something has always gotten in the way so that it did not happen. I was glad to finally get to do this. Now that I have done it I want to do it again. I have a couple of ideas of stadiums that I want to visit, and with a little luck I can get that done.

On the bus ride from the stadium to the airport I put together an Exposure page documenting the two day trip from Terre Haute to Minneapolis that you can find here. This is a project that I have been trying to do for a while now, and I have run into a lot of roadblocks of many forms in getting to do it. I loved seeing the prep work that Indiana State did for this game. The best moment of all though might have been Coach Sanford talking to his team after the game. It was a great speech that made me want to put a helmet on at Southeast Missouri State next weekend. I really would love to do this again if the schedules would allow it.

The Week in Photos

Once again I have compiled my favorite photos of the week into one Exposure post that you can find here. This week was supposed to have three sports in the gallery, but a last minute audible erased my Sunday shoot. I like the photos this week though, and I will have a hard time topping them next week.