Purdue Walks Off Illinois State To Cap Off An Fun Day

Sunday was a day when I was planning on making some baseball photos, but not nearly what I ended up making. My plan was to photograph game one, and then part of game two before heading home to watch some March Madness. I ended up at the park for over eight hours Sunday not leaving until after the celebration was over. This Purdue team is fun to watch. In fall ball you could see it, and I hoped that it would translate over to the spring. It did. This team is never out of the game. They lost a 4-1 lead, and they were trailing 5-4 in the ninth inning. The came back to tie the game, and then walked it off in extras. These are the moments that make what I do fun. I have photographed a lot of walk offs in the past, and this one was one of the most fun.

Check Out This Park

I never thought that I would be at the stadium until sunset when I left the house. I had gear to make wide photos if that happened, but I thought that I would be home watching basketball. The clouds didn’t show up to make a great sunset, but blue hour at a stadium is always a nice thing. This park looks so nice all of the time, but in great light like anything else it looks even better.

When this season started I had a goal of making a photo of Mike Bolton diving into a base. Early on here after a couple of weeks I have multiple photos of him diving into every base except home. He is always moving, and the new goal is to find new ways to show off his speed.

A few years ago when I was making photos at the Indy Indians I started making what I called in game portraits. Finding those moments where you and the player are in a position to make a nice photo of them. It is a fun way to make some different images, and also a way to bring the fans in closer to the players. I am still looking for my first bubble photo of the year a couple of weeks in.

This was my first game with some great golden hour light. I spent most of the game working with the good light to make some photos of players that I had not seen yet this season. As the season goes on I will start to move behind the light to have some fun with it there. Right now though it is fun working with that beautiful light. Hopefully we get some more of that this weekend.

Games like this one where I am just there for myself having fun I really have no assignments. At some point I just start making whatever is the best photo at the moment. I made a few Illinois State photos during the game because the conditions were right. When a player is diving into third it is always a good time to make a photo. This was the only time during the game that someone did not jump in front of me during the play as well.

Ten years ago I used to go to Lambert Field every game to watch Eric Charles play. That Purdue team had players that reached the bigs, but Eric was the one that I loved to watch play the game. I swear that guy would be dirty from infield before the game. Evan Albrecht reminds me of Charles in many ways. He is a very solid defender who is doing big things at the plate. He was dirty almost immediately during this game, and of course had the big walk off hit that sent us home. I don’t like comparing players from past to the present team, but little reminders of those players are always nice.

Taking The Extra Base

Part of what makes this team so much fun to watch is how they run the bases. They are always looking to put pressure on the defense and take that extra base. It does not always work out, but that pressure really does seem to produce more runs. It also makes photography much easier as there are more close plays on the field. I have said it many times on this blog, but this is an exciting team to watch/photograph. As we head towards the Big Ten season it will be fun to see how that style of baseball plays in the Big Ten season. 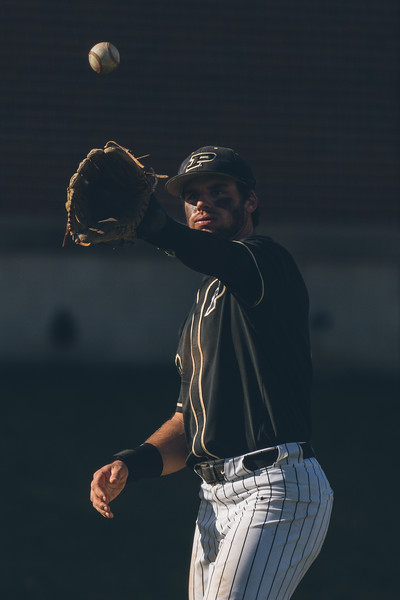 More Photos From The Doubleheader

This was a fun two games on Sunday. 19 innings is a lot of baseball, but man when the teams are battling it is fun. I was only going to stay for a few innings of this game like I said, but there I was still making photos in the 10th inning. You can see some of my favorite photos on the day in the two galleries below.