Wednesday night I was in Mackey Arena for the second straight night. After being in the zoo that is media for the men’s game it was nice to have a little room to work with at the women’s game. This game at one point looked like it was headed to a boring finish, and then the fourth quarter happened. Both teams scored a ton in the fourth quarter in what ended up being a frantic finish. Purdue held on for the win thanks to some key buckets late. This is still a fairly young team, and there is a lot left to learn. The good news is that they are winning while learning on nights like this. I had fun making photos at this game. You can see my gallery from the night here.

This game belonged to Rickie Woltman. She dominated from the start and ended the night with 18 points and 11 boards. She was a problem down low, and the extra attention that they started to pay her helped open up her teammates.

This game might have not had the outcome that it did without the late game play of Madison Layden. Layden ended the game with 20 points including some big buckets down the stretch for Purdue.

Shortly after I started making photos for schools the websites went to formats that really needed horizontal photos. A vertical photo would not work. For most sports that is not a problem, but for basketball it kind of went against what you would make normally. Early in when working for Purdue the photo would have most of the right side covered up so we not only had to make horizontal photos, but have the action show up on the left side of it. I would make some vertical photos to change up the look of the gallery, but most of what I made was horizontal. This year I have been having some fun making vertical images again. Since the photos are just for me I can do what I want, but it has been fun composing in different ways again. 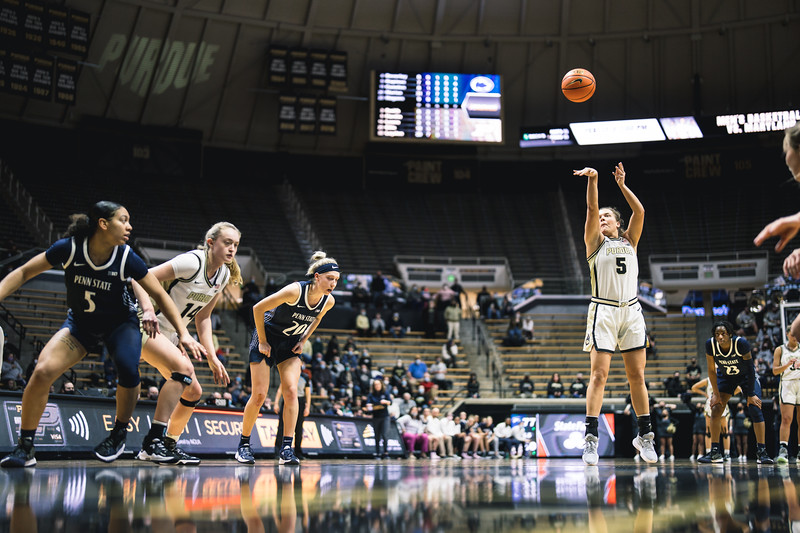 I spent a lot of the game trying some things out. You always want to make the photo, but some games you just want to get out there and try some things. This was one of those games. I missed a couple of photos when I was doing this. That never feels good, but sometimes that happens. This year with no real outlet for my images it stifled me at first. I had no real goal going into games. No gallery to build or help build. I made a decision a few weeks ago to just be selfish. To go out and make the photos I want to make. Sometimes that means missing game photos, but as I just said with no outlet for my images who cares if I miss a photo or two? That selfish thinking has led to some of my favorite basketball photos ever in these last couple of weeks. I don’t think I made any amazing photos on Wednesday night, but I did learn a few things that will help down the road. One thing about photography is that you never stop learning. That is what makes it so much fun to do is that there is always something new to try or do.