Tuesday night I was back in Mackey Arena to watch Purdue take on Illinois. It was a late game, but the fans were ready, and you never thought that anyone was tired. In fact as time was winding down I was expecting to see people heading for the exits. Purdue had a sizable lead, and they could get a head start on getting home. That was not the case. Boiler fans are the best, and they stayed until the end. These games are the reason why Mackey is such a great basketball venue. We are watching something really special right now. This is a special team, and they seem to thrive in the big game scenario. There are only big games left so that is a good thing. Hopefully we can raise another banner or two next fall. There is a lot ahead of them before that can happen though.

In the past I had other duties during introductions so I never really got to photograph them. This year though I have no duties during the game other than to make photos that I like. After the last game I had an idea for a photo, and I wanted to see it out Tuesday night. Sometimes you come up with an idea that has no chance of actually happening. Here things worked out pretty much as I hoped that they would for the photo. I think that I have exhausted my intro ideas for the moment so I will let others get in there to see what they can do. It is getting pretty crowded around the team before the game.

The Black Out Game

This is the fifth Purdue game that I have seen in person this season, and it is also the fifth different uniform that I have seen the Boilers wear. I love how the black uniforms look in Mackey Arena. I don’t get to photograph them often so it is always fun to make photos at the blackout game. When the fans get together and where a similar outfit things looks amazing. Nothing tops the t-shirt game though, and that is the next home game on the schedule. 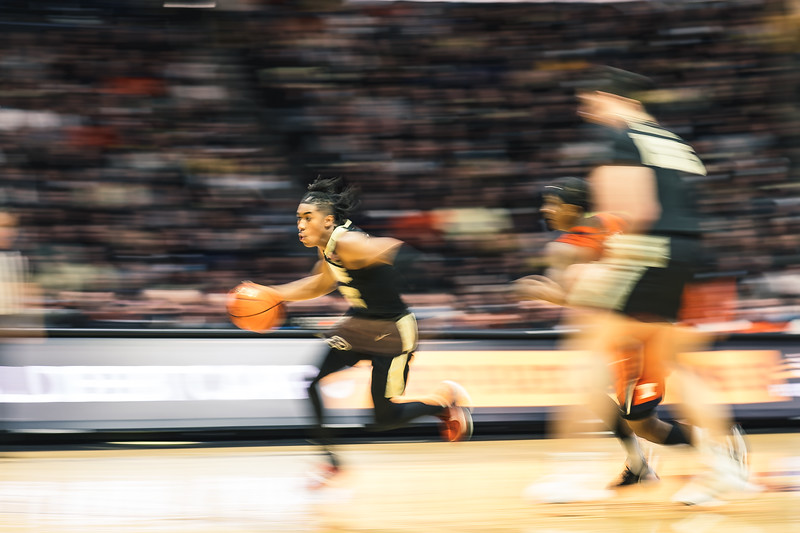 In the first half I was messing around with slow shutter speeds for a while. I have a dedicated button on top of my camera that lets me switch to making photos at 1/15th of a second by pushing it. I can also get right back to my normal Mackey settings by letting the button go. In the second half I was having some fun trying to show how fast Jaden Ivey is by panning with him. This was my favorite of those photos. Jaden has a different gear than his opponents, and I wanted to make an image that showed that. 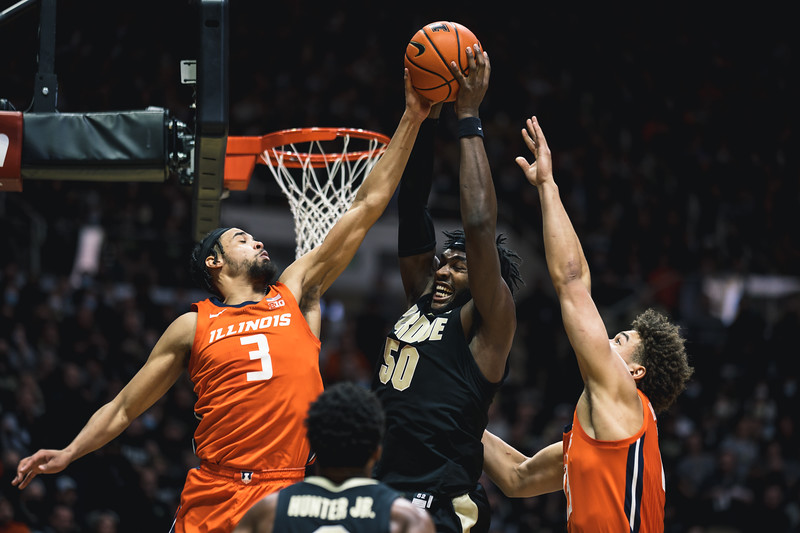 For most games I have just made photos during the first half, and then left the arena. I don’t have a dedicated spot on the floor, and I have been letting others have the space on the side. Years ago I was the only person over on the side, but lately it has become just as crowded as the baseline. On Tuesday though I knew that I wanted to photograph the entire game. Eight minutes into the first half I moved down to the other side of the court to claim a spot on the side. I knew that I was giving up Purdue photos for the rest of the half, but I would have a spot to sit. By being down there though I was able to make some defensive photos that I really liked. The one above of Trevion Williams battling for a rebound was my favorite of those. You can see just how tough every rebound is in the Big Ten with this photo. After fighting for position all game on Tuesday I plan on taking things easier on Sunday. It is the t-shirt game, and my plan is just to make wides the entire time. I may make some action photos during the game, but they will be a little wider than normal to show off the look of the arena. As I write this I haven’t seen the design yet, but it has yet to disappoint.

A Photo Years In The Making

After the game was over I saw a familiar face at the side of the court. A popular theme this week on the blog was my move back to Indiana from Iowa. My first winter back home the Irish women’s team offered season tickets for $50. It was a great deal and started a run of a few years with my having season tickets to both Purdue and Notre Dame women’s basketball. As my seats moved around I started to see a new face on the sideline. That was Irish legend Niele Ivey coming back to coach alongside of Muffet. There were times pregame and postgame when I would see her interacting with her son. My seats were behind the home bench so these things happened right in front of me. It was so cool to see that no matter how big the game was that she made sure to see him before it started. I have not been to a Notre Dame women’s game  since I moved to West Lafayette. I had some time away from the program. In that time that little guy grew up to be an amazing basketball player. For myself I wanted this photo of mother and son after the game. They really have a special bond, and the gallery would not have been complete without it. 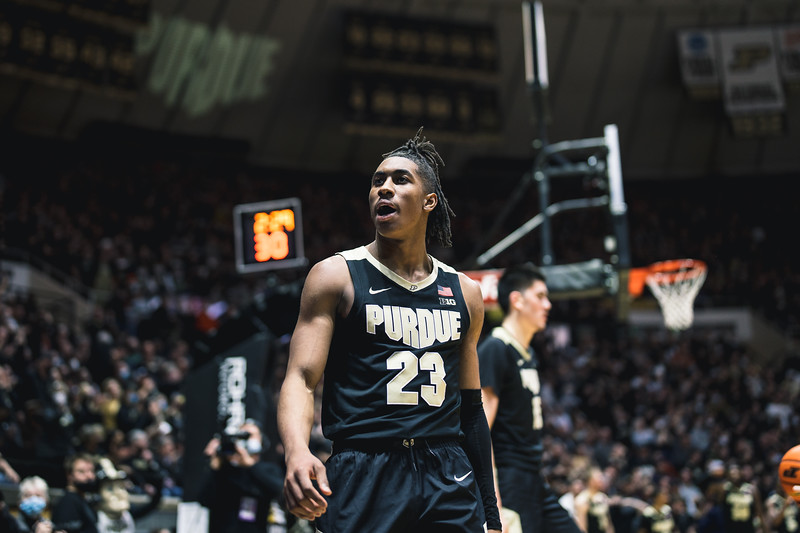 During the second half I saw something that I haven’t seen for a while. As a kid watching Bulls games you could always see the moment when Jordan was wronged in his mind. The eyes took on a different look, and the other team had no idea what it was in for. On Tuesday night I saw that look again. Jaden Ivey was getting crushed as he went to the hoop, and the refs were not calling anything. He used that frustration to fuel him, and we all were in for a show. I see some similarities beyond the number to their games. He is so fun to watch play the game, and when you press that button things get a lot more fun to watch.

Here is a link to my gallery from the game. I went into the night with the idea to put together a gallery to show the night from start to finish. I have been just making photos for me for a while now, and I wanted to get back into the idea of making a gallery and telling a game story. Overall I am happy with it. There are pieces that I love from it, and there are things that I wish that I did a little better. This is a really fun team to watch, and I hope that I showed some of that fun in my photos.