My 21 Favorite Photos From The 2021 Prospect League Season

In 2021 I photographed more Prospect League photos than ever before. This journey started with the 2015 Kokomo Jackrabbits season. I photographed a few games fro the team then, and then the all star festivities in 2016. With a team in my backyard it made it easier than ever to attend games. I tried to make a point to get out as much as I could this year. I was blessed to have a very good Lafayette Aviators team to cover which gave me some great games to see over the course of the year. They were the cardiac kids that really liked their late game comebacks. That luck extended all the way to the league finals which saw two of those games at Loeb Stadium. With some of those pieces already announced to come back this year it looks to be an exciting season. Here are my 21 favorite photos from last year.

21. This photo was one of the last that I made this year. The Cape Catfish won two straight games at Loeb Stadium to win the Prospect League title. I really was hoping for an Aviators title, but I felt that I had to make a photo of this celebration for the historical nature of it. This year I would love to see the Aviators hoisting this trophy.

20. In this league the players do a lot of the work. Here some of the team rubs down the baseballs that were to be used in the game. No matter what the level this is a process that is always fun to photograph.

19. This season Jayson Newman did it all. He was a threat to go deep every time that he came to the plate. He was a force at the plate. He was also a good closer that could shut the door on the opponent. One thing that I didn’t know about Jayson was how much of a threat he was on the bases. Here he slides into second base safely on a steal attempt. He would also immediately steal third. If he had stolen home the fans inside of Loeb would have lost their minds. Late in the game I was panning and luckily grabbed a frame of Jayson sliding that I liked.

18. This stadium really does have the potential for some amazing sunsets. The conditions are not always right on game days, but maybe this year things can come together for the photo that I know is there.

17. This was not a planned photo. I had my 70-200 with me making images of the team celebrating a birth in the championship series. As they started piling up for a group photo I started moving backwards as fast as I could. Thankfully I was able to get back in time while they were still having some fun. 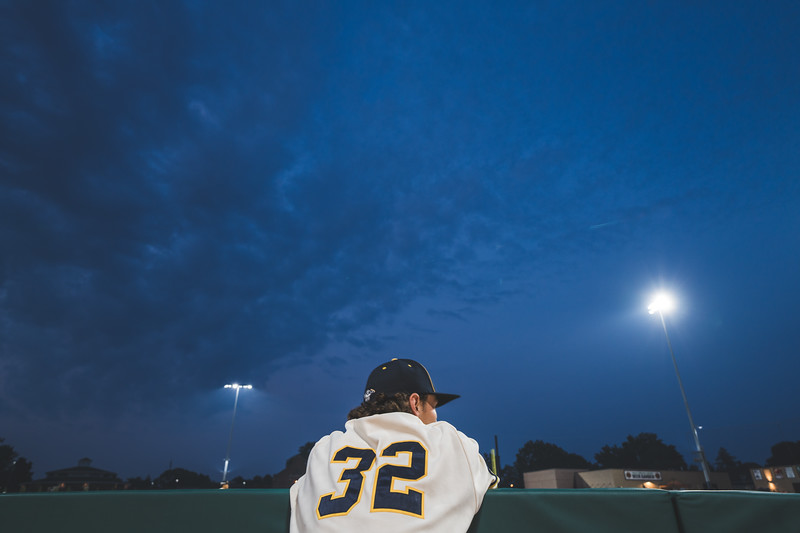 16. Here Nolan Lebamoff watches the play during blue hour. Nolan pitched a gem in the opening round of the championship series on the road. It was a great performance for sure. Valpo has a good arm heading their way. 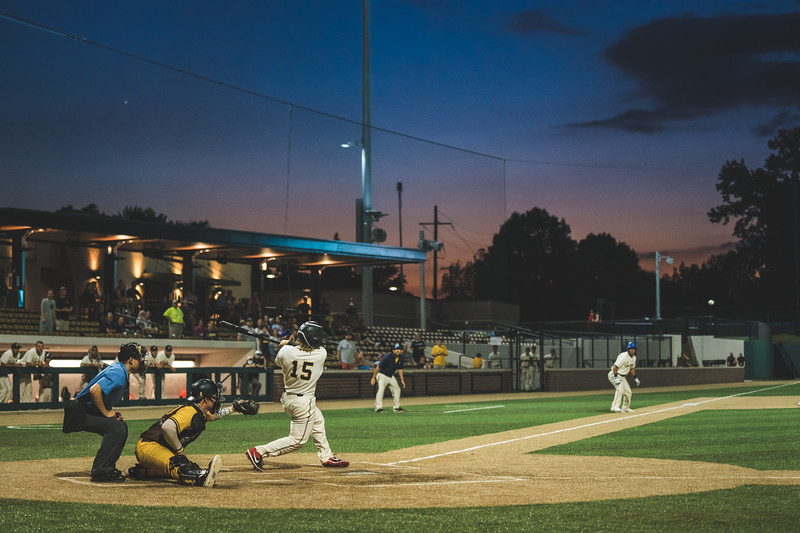 15. Early in the season I found a good vantage point when the light was good. You can have the best sky in the world, but you need a little action as well. Here Trevor Johnson laces a hit which was a common occurrence this year. 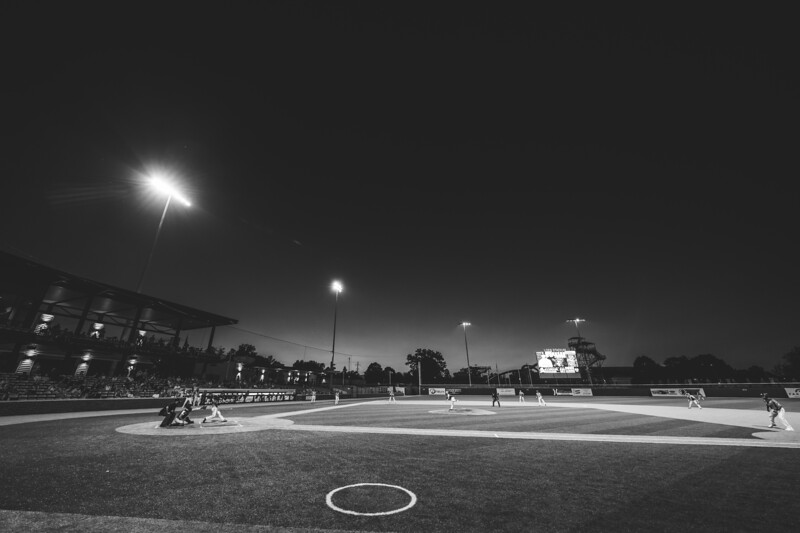 14. I was not a fan of the old Loeb Stadium coming down for a new stadium. This past season really changed my mind about that. This is a really cool stadium that I hope to make many photos in during this coming year.

13. I would always hesitate to make this photo because of the way that they filmed the runout. I would always end up on the jumbotron when I tried this. I love the look of it though so for a couple of games this year I got in the way to make a photo. This was my favorite runout photo of the season.

12. The interactions with the fans help make summer ball what it is. The way the dugout is set up at Loeb makes that a little easier. Here you can see the adoring look in the eyes of the young fans as they listen to pitcher Jackson Dannelley. Jackson will by playing in Lafayette again in 2022.

11. This was one of those nights when I wished that things had worked out a little differently. I would have preferred an Aviator on the mound, but the light comes when it comes to I made this photo of the Terre Haute Rex pitcher as the sun was going down. 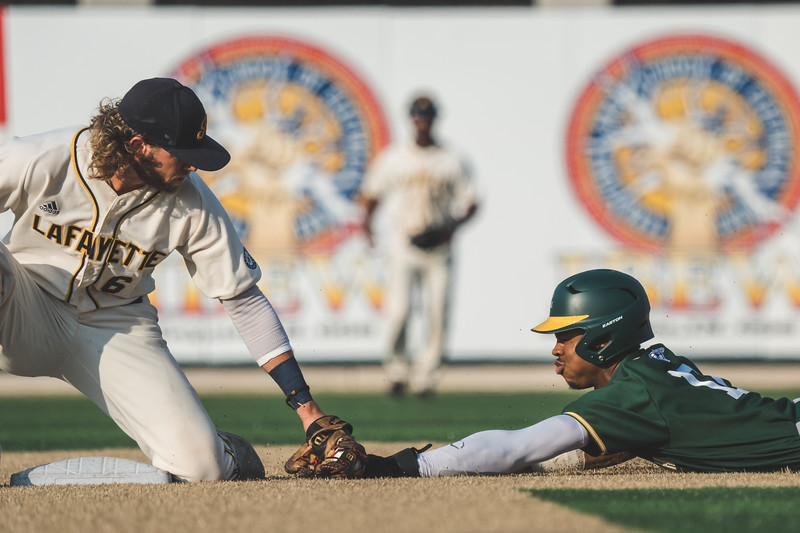 10. This photo features two players that I hope to photograph again this season. Mike Snyder has already been announced as coming back to the Aviators this summer, and Curtis Washington Jr. who is sliding into the bag here plays for Purdue. Curtis is part of what could potentially be a very fun 1-2 punch in the lineup for the Boilers. 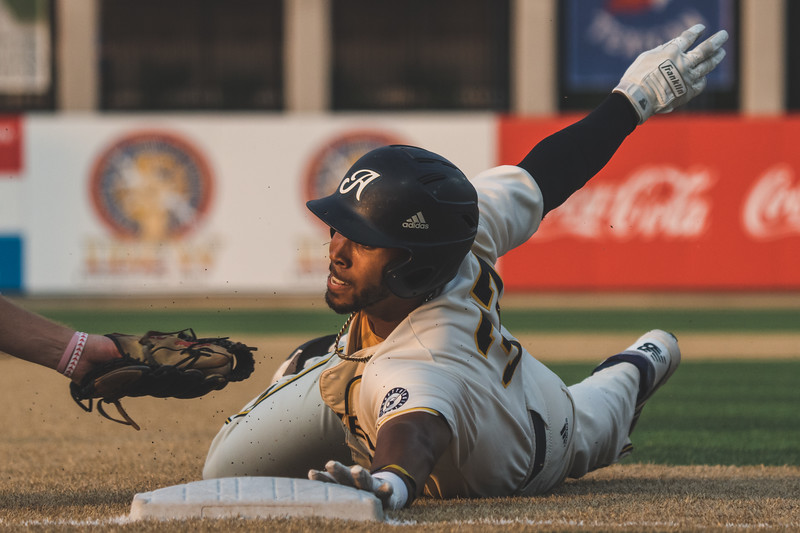 9. I love this slide into third by Allbry Major. I had already covered Allbry when he was at Xavier so it was nice to see him playing ball again. Some players just photograph well, and Allbry is one of those. This was a part of three straight nights when Allbry made a different kind of slide to get into third before the tag.

8. This was a season saving play. A ball that went by the catcher had the potential to score the game winning run in the championship series. Jayson Newman who had already been the offensive star of the game was on the mound pitching. His quick thinking got him to the plate in a place where he could catch the ball and still block the plate. The play kept the game alive, and was a great moment. 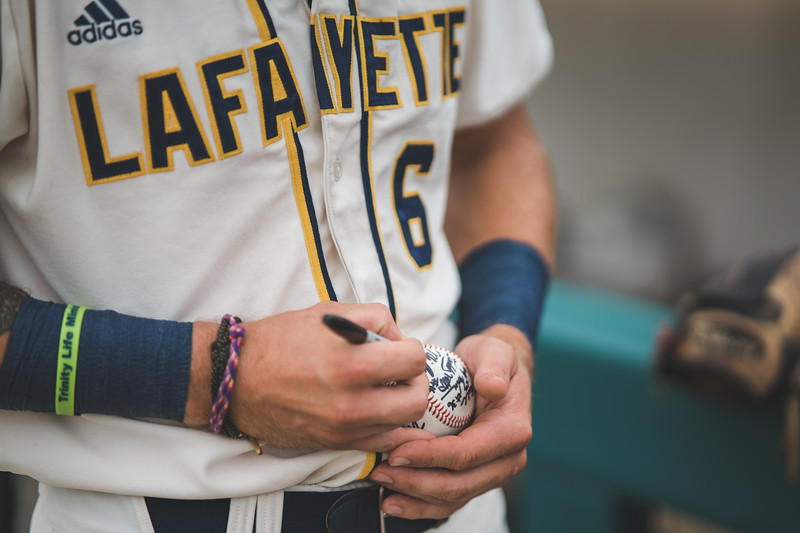 7. These players are great with making sure that the fans have something to remember their gamely experience. Before nearly every game they would take the time to sign baseballs for the fans. It was fun coming up with new ways to show that process. 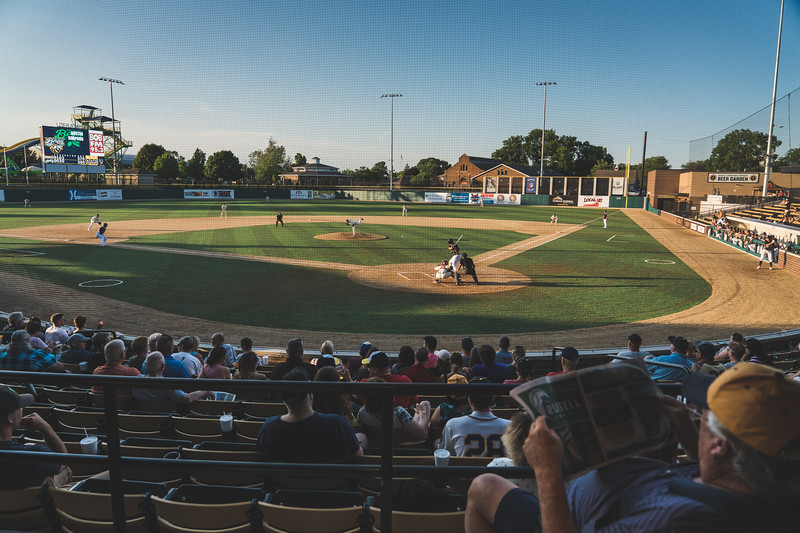 6. I love this photo because of the little bit of time that it captures. This is what summer ball is all about. As I write this it is cold and gloomy, and I cannot wait for these great summer nights to come back. 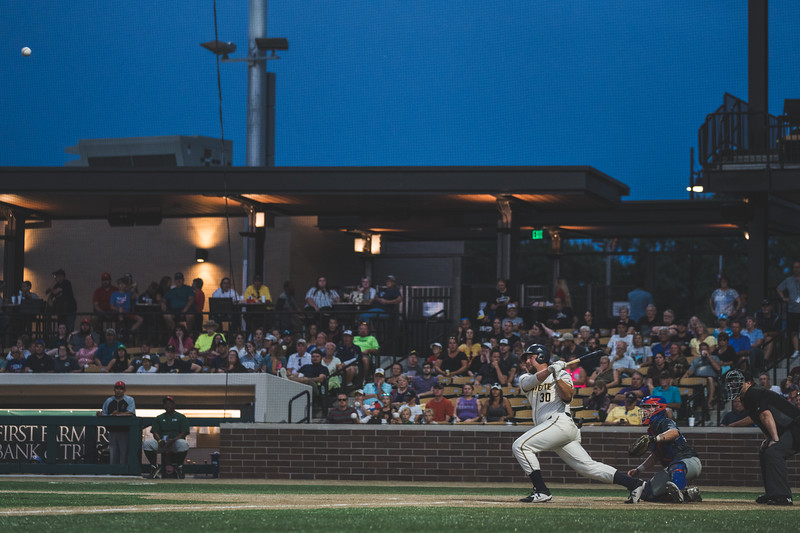 5. Blue hour at Loeb Stadium is a special time. You have the orange lights on the stadium that play very well with the blue sky. I would pull back a bit during this time so that I could show the whole scene. This was my favorite of those photos.

4. If you attended many games this year then you knew who Jorge was. When he was on the mound the photos just seemed to make themselves. He plays with a passion that just makes for great photos. Here I liked this quiet moment though as the batter was trying to figure out what the next pitch was going to be. 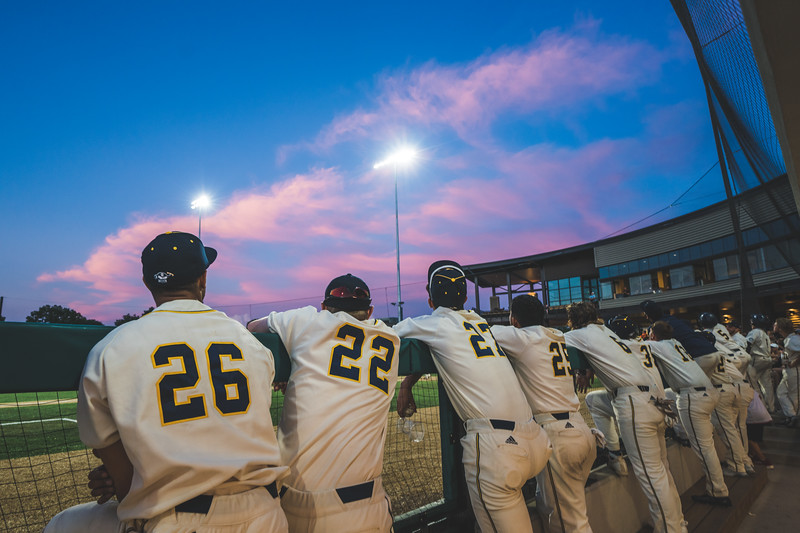 3. Early in the season I was enjoying having access to players again. For the Purdue baseball season I was not allowed on the field level. I had to make photos from the stands. When summer ball started I was back in the dugout with the ability to make photos like this. When the sky looks this good it is time to forget about the action and make some nice team photos. 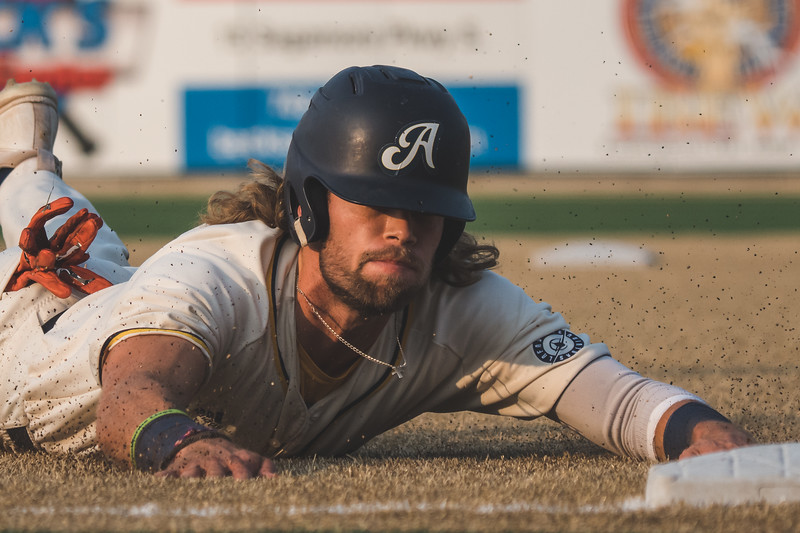 2. There were some cool plays at third base this season, but this one really stands out to me. The last light of the day really helped illuminate the pellets kicked up as Mike Snyder slide head first into third. It was just a cool action photo that worked out very well. 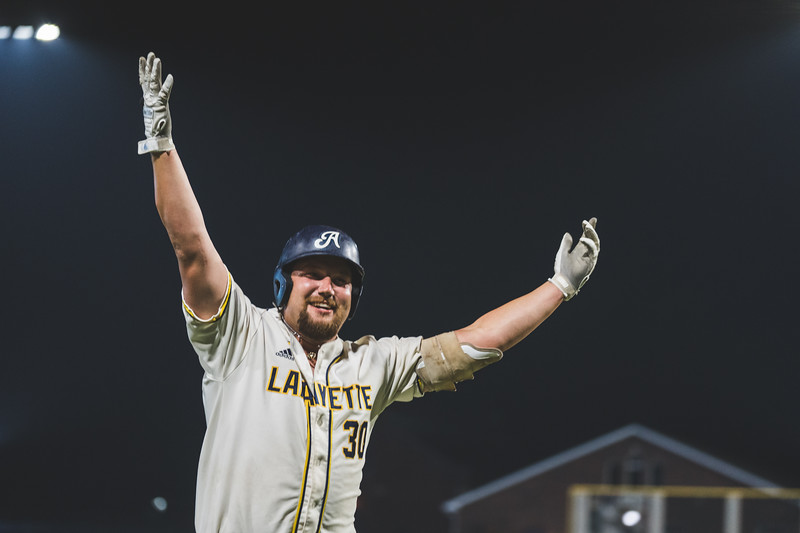 1. I picked this as my favorite photo of the season for a couple of reasons. The first is that it was a fun moment. A slam made sure that the Aviators would advance to the Prospect League finals. I went out of the dugout with the team and loved how Jayson Newman was hyped and so was the crowd. It was a little moment that was amazing to be in the stadium for. These are the little things that make photographing the Aviators so much fun.