My 21 Favorite Purdue Volleyball Photos Of 2021

The theme this year in my wrap up posts seems to be that this was a weird year. That is the case for volleyball as well. I started off with a couple of jobs for the team, but I never photographed for them again. This might have been the best Purdue team that I have seen in person, and I never felt farther away from them. It was a special year that we will remember for a long time to come. They still were amazing to watch. I was on pins and needles watching them in Pittsburgh fight. That comeback in the fifth set against BYU down 14-10 showed me a lot about each member of that team. They never gave up. Man this team was special. Here are my 21 favorite photos from a very special 2021 season.

21. These are the fun little moments that are so much fun to capture. Here in the pregame huddle senior Marissa Hornung takes a moment to herself.

20. This year we gained another Hornung as Marissa’s sister Ali joined the team. With freshman you never know what you are going to get. Late in games though with Ali on the serving line I started to really believe that she could close out matches. She has a bright future ahead of her for the Boilers.

19. This photo is a case of not really caring what is happening anywhere else on the court. Emma Terwilliger did not stay on the court very long. She would come in to serve, and then sub out. Knowing that I wanted to make as many photos of her as I could. If the Purdue can get a point she can stay in the game. Emma had a great celebration so I wanted to capture that. Here that thought process paid off, and I was able to make this photo.

18. This year Jenna Otec had some great celebrations. It is hard to pick just one favorite. The spin celebration looked great on video, but I never really captured it as good as I think that I could have. This celebration though was one of my favorites. It is just good old fashioned joy.

17. This year was the third time that I was lucky enough to be able to photograph the NCAA volleyball tournament. I don’t get to do it for Purdue anymore, but I always try and make sure that I make some photos of them in the tournament. Here I love the emotion as the team celebrates another block.

16. These are the moments that make photographing volleyball so much fun. A player coming off of the bench and doing well. The smile says it all.

15. When you have a big game or special game I always want to pull back a bit and show some of that atmosphere off. The NCAA signage is one time where that is especially true. It is the end of the year so you should have images for graphics and whatever else you need. Now you can focus on the history of the moment. That is one thing that I think is missing from photography now is giving the viewers that sense of place.

14. Dave will show up on the countdown again later, but this is one of my favorite photos of him from this season. Man this guy can coach volleyball. He comes from a great background, but what he has built at Purdue is really special. The foundation is there to keep this thing going as well.

13. Volleyball is a weird sport. I make a lot of action photos that I like, but for some reason the photos that end up on this countdown are almost always the emotional ones. Moments like this are too good not to share though.

12. That tournament atmosphere was tough to beat. Purdue was down and the people on TV were already starting to count them out. They came storming back, and during that comeback they brought the emotion. This was a fun match to photograph for that reason. I only saw a small portion of it, but I am glad that I did.

11. This year we got a bonus year with Jenna Otec. She fought for Purdue for a few years now, and this year she saved her best for last. She was a dig machine. If you pointed your camera at her chances were pretty good that you would get a dig sooner rather than later. Last year I thought that we saw the last of her in a Boiler uniform. The announcement of her return was so well done, and this team played as good as I thought that it would with her back as the libero.

10. Here is a photo that almost didn’t happen. I was not going to head down to volleyball that night. I was not technically working, and I didn’t want to steal space from someone who was. When I saw that they were down 0-2 though I knew that I wanted to go. If this was going to be it then I wanted to be there to see the end. Of course Purdue stormed back for the reverse sweep and moved on to Pittsburgh. This team had guts. You can’t teach that. They never gave up, and here in the fifth set Holloway might have been as loud as I have ever heard it. I am so glad that I made my way down to Holloway.

9. Volleyball emotion is so great. Maybe some of that is because in the fall you have football and soccer emotion which is almost always farther away from you. In football you have the facemask that hides some of the emotion too. In volleyball you are close, and they really bring the emotion. Here Emma Ellis brings all of the emotion after a big play.

8. Stacey Clark was an amazing person. Every year Purdue plays a tournament in her honor. Before the game I wanted to make a special photo, and when I saw freshman Ali Hornung and her number 21 I knew that I had it. One image that set the stage for the 2021 Stacey Clark classic.

7. These types of photos do not always work out. I want as many faces as I can get in the celebration. Here things worked out for an image that I really liked.

6. I love these quiet moments before the match. The video board is playing the pump up video, and the players are watching it. If you get in the right spot you can make these great little candid photos of them. This one is one of my favorites.

5. I love emotional images, and this is one of my favorites of the season. The match against Tennessee was just so much fun to watch. Purdue was playing so well that day, and they were feeling it. After a big play you can see just how much they were feeling it here.

4. Holloway Gymnasium is an amazing place to make photos. I try and show that off as much as I can when I am there. This is one of my favorite wide angle images from this past season.

3. I mentioned this in the soccer post, but 2021 was a cool season because Purdue had a chance to beat Indiana and hoist the rivalry trophy twice in one calendar year. They won the Monon Spike at Indiana this fall, but in the spring I was able to see them hoist it. I have photographed them with this trophy on both campuses, and it never gets old.

2. The win against Wisconsin was amazing. It was part of a great day on campus. Purdue knocked off a top 3 team in volleyball, and then won a Big Ten Tournament soccer game just down the road. I wanted something different when Purdue clinched the match. I was not making photos for anyone other than myself so I could gamble a little bit. I went behind the team knowing that one players arms of body could ruin the photo. This came out pretty good for me here, and I was able to make a pretty good frame. Most of the time this would be number one on the countdown, but then photo number one happened a few moments later. 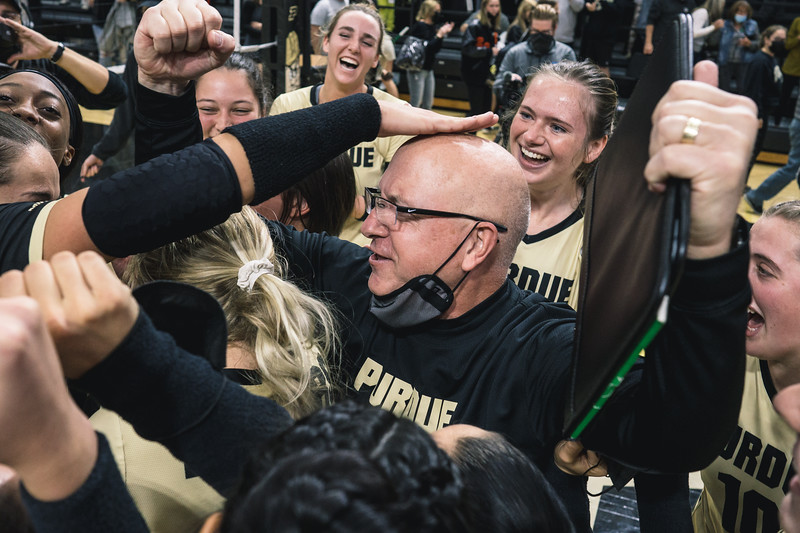 Can you tell by the opening of this post that I think that this was a fun and special team? I don’t think that you can have any more fun than I had this year making photos of this team. They were truly special, and they made sure that the fans were entertained. As I tweeted during their last game of the season they might have taken a couple of years off of my life though with their late game heroics. I was a invested in them though, and that is why I was living and dying with every point. I really wanted to see them in Columbus in the Final Four. One of the reasons is a selfish one. I would have loved to have made photos from wherever my seat was of this team. I also wanted it for the seniors. Those that used the extra year as well as the current group of seniors. They gave so much and meant so much to this program that it would have been great to see them break through to the next level. I also wanted it for Coach Shondell. Losing his dad late in the year could not have been easy for him. I don’t think anything could have eased that pain, but I also had this though that Dr. Don may have been helping with some of these great comebacks.

edit: After I wrote this Wisconsin went on to win the National Championship. Beating the eventual national title team twice at home and away is a sign of just how good this team was.

This was a fun year to follow this team. When this post goes live things will have changed for me a little. This little business that could will be no more. The first of the year brings many things, and one of them was a fresh start for me. The cost of keeping the doors open was just more than I could bring in. The virus really hurt the business, and past year just put the finishing touch on it. This volleyball season could very well have been the last that I photograph, but man it was fun to do. Talk about going out on a high note. This year you will see some different images on the site, but hopefully images that you still like. I have been having some fun in the past month getting out there and finding things that interest me to photograph. It has felt like the early days of this blog as I try and find the things to fill the pages of this site. This will be a fun year as I find what is next for me.