My Favorite Purdue Soccer Photos From 2021

This is a weird year. Normally I would say from the 2021 season, but this calendar year we were blessed with two chances to see Purdue soccer play. We had the spring season and the fall season. I can’t think of a better team to get to see twice in the same year. One great thing about that fact is that we were able to see the Boilers hoist the Golden Boot twice at Folk Field in 2021. We also saw a home win in the Big Ten Tournament as well as in the NCAA Tournament. This was a special year for Purdue soccer. Here are my 21 favorite photos from this past year. 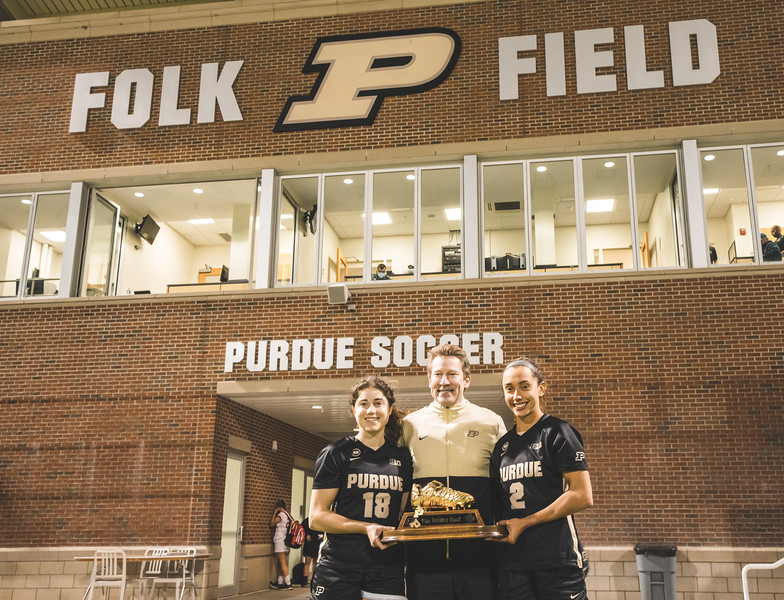 21. We start the countdown with the Golden Boot. Like I said above Purdue won the boot twice in 2021. I don’t know that they will ever do that again, and quite frankly I hope that they don’t because I don’t want to go through another year like 2020. Here the seniors pose after the two overtime game against Indiana. I don’t know how the teams make it through regulation most of the time. To then have two extra periods on top of that is just a testament to how athletic and gifted these players are. 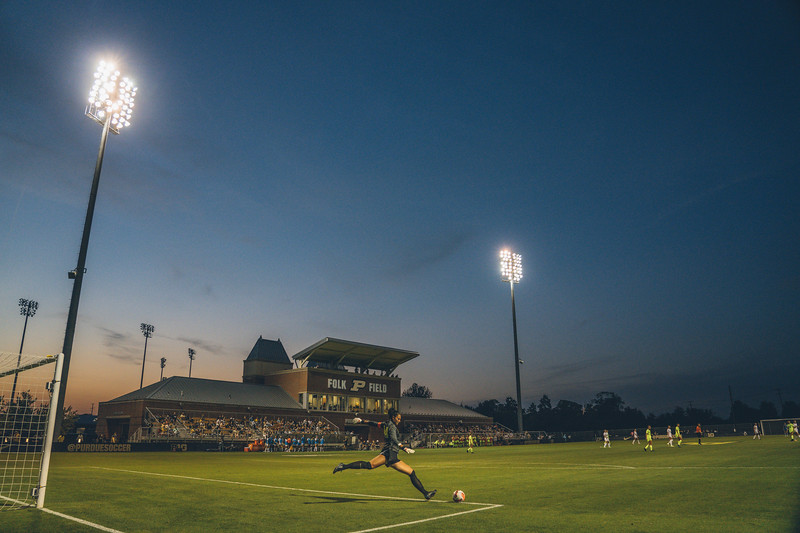 20. I went to one of the games just to see the Folk Field sunset. It didn’t pan out like I had hoped, but the sky is always great out there even if the clouds don’t light up. Here we had a good blue hour that looked great. 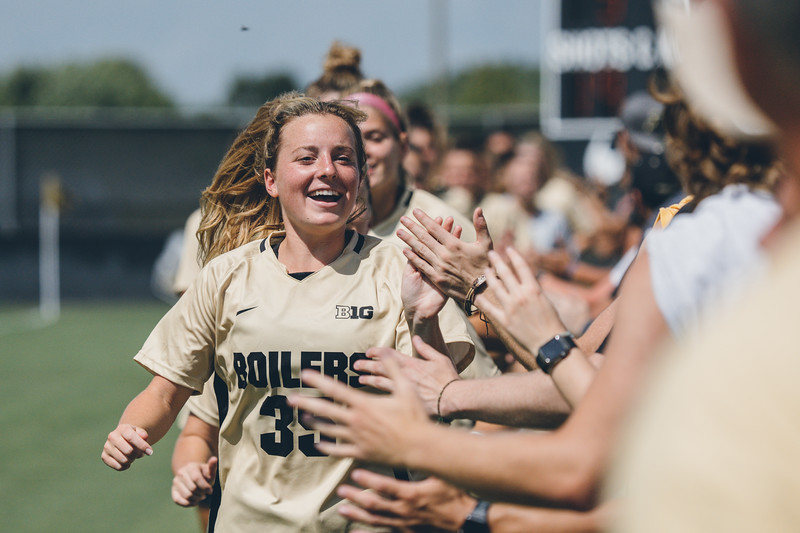 19.  A great tradition after games is the team going around the field and thanking the fans. They do it every game win or lose. Easy preseason game or double overtime tournament win. After the multiple overtime games I often think that the team should have the fans come to them. They have run enough. They still go to them though. This year they had the pleasure of greeting more fans than I could remember in past years. The extra fans made Folk Field a tougher place to play in. 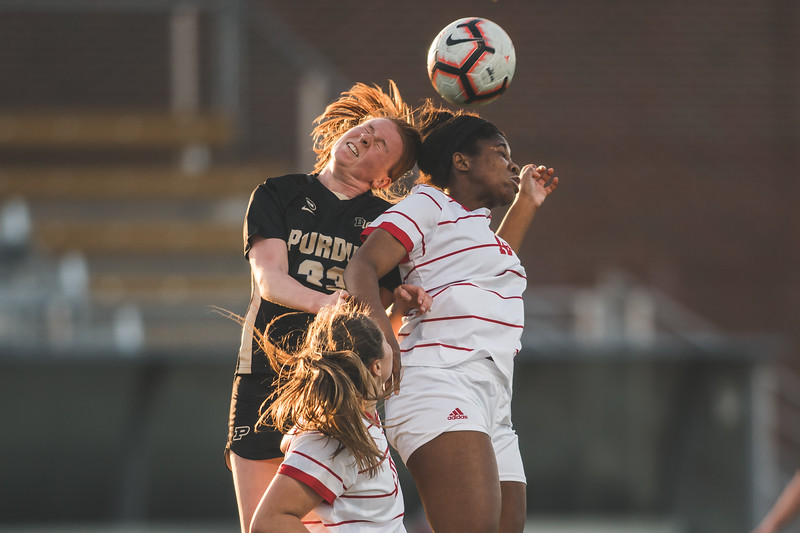 18. I love these close header battles. When it is against Indiana it is even better. With some golden hour light streaming in it is really a great sight to see.

17. If you watched the team this year then you know what comes after this photo. Sarah Griffith would do this great move that was part dance move and part athletic move. The defense would go one way, and Sarah would go the other free to the net. Sarah may appear on this countdown a few times, but she just had the best soccer season that I have ever seen. 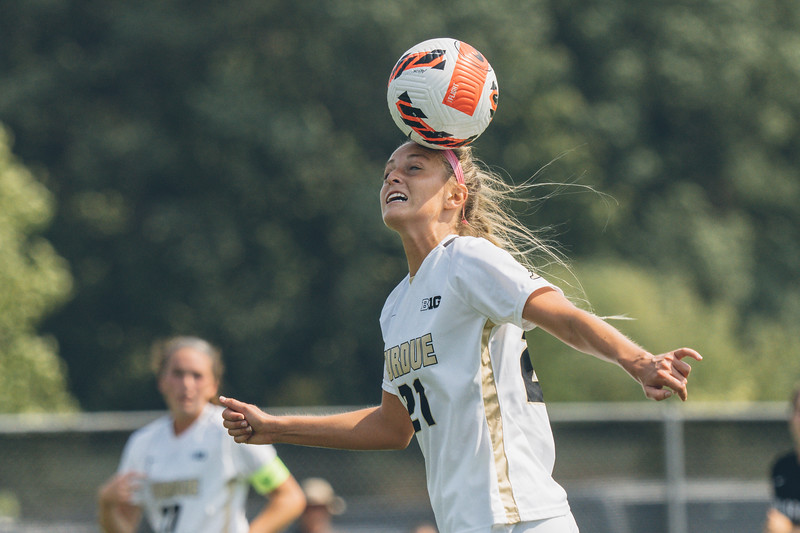 16. I made this photo while photographing for the opponent. Being on the other end of the field allowed me to make a few photos of the defense that I normally cannot make. I have always thought that early in the season they should have two photographers at the game. One can be at the offensive end. When a goal is scored you need to have that photo. You can have the other photographer on the defensive side of the field to get some photos of the defense that you can use the rest of the year.

15. This was the record tying goal for Sarah Griffith that won the Big Ten Tournament game at Folk Field. I was blocked during the initial celebration, but I made this photo shortly after. You need to check out the Purdue accounts to see the photo by Purdue photographer Andrew Stein. He made the photo of the season of one of the great moments of the season.

14. I made this photo during the second overtime of the NCAA tournament game at Folk Field. I always like these little moments during a game. They are the little plays that can turn into the big goal. 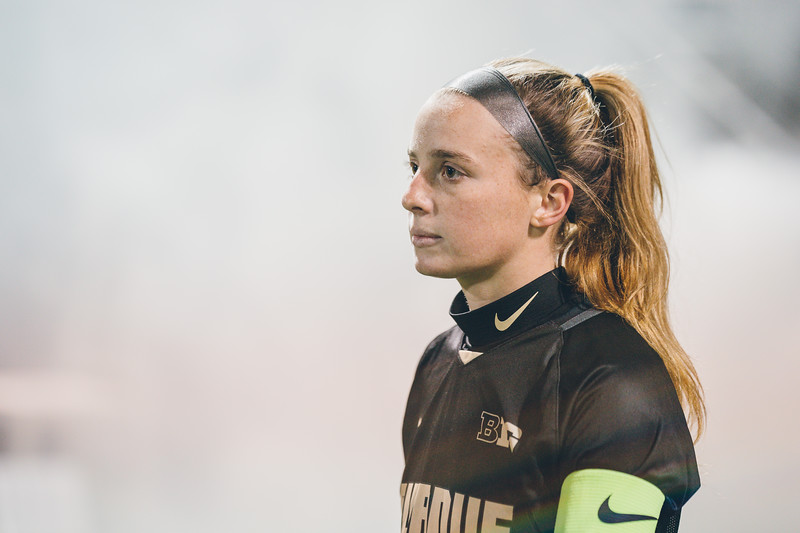 13. Before that NCAA game they had white smoke flow as both teams took the field. The PA announcer had us tricked thinking that the team wouldn’t be on the field for the anthem, but then they started coming. I scramble to get to a spot to make a photo. I thought that I struck out, and then the last player out alone was Sarah Griffith. It was a fun photo of one of the best to do it at Purdue.

12. These are the best types of goal photos. When the players are just ecstatic and jump into each others arms it always makes for a great photo. At the time I didn’t realize that this was the start of a historic season for Sarah Griffith. 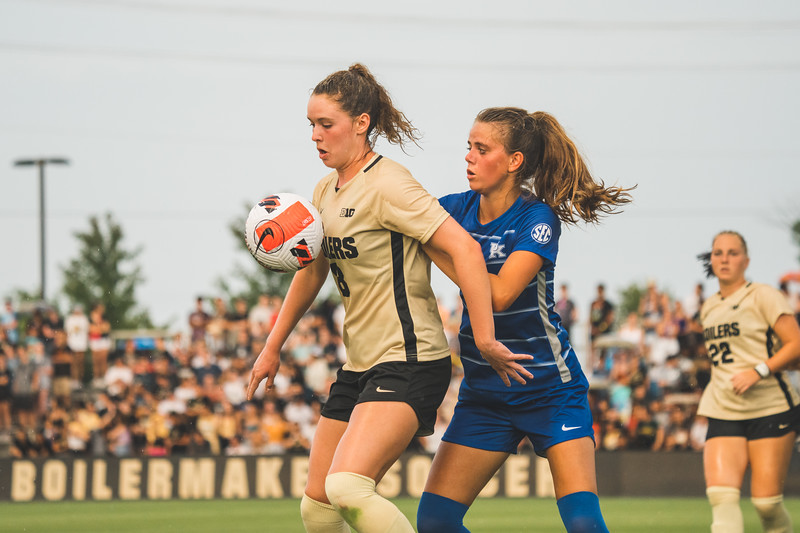 11. That first home game against Kentucky was a great place to be. You can see the crowd in the background. They were loud, and it was amazing. After not hearing crowds for so long it was great to hear a crazy crowd again. I tried to pick a spot where I could get some of that record crowd into my photo. I risked getting blocked by the ref, but I was only there for myself so it was a gamble that I was willing to take.

10. The Indiana game was played in the rain for most of the time. It was already going to be a battle, but with a slick field it upped the difficulty that much more. This was one of my favorite action photos from the day. You have the water and turf coming up from the feet with a little battle going on between the players. 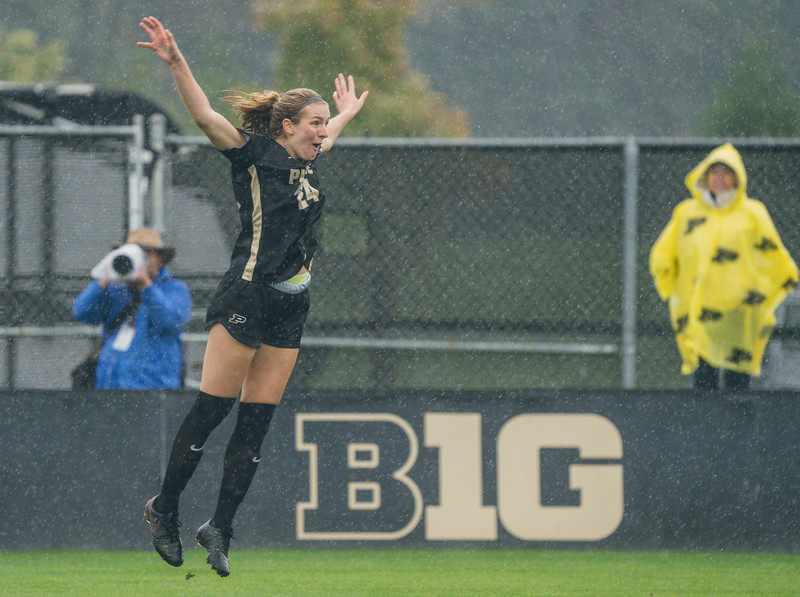 9. Over the years the Mussallem family has been a fun one to photograph at Purdue. Hannah and then Ally have helped me build a soccer portfolio. A few years ago Ally gave me one of my favorite goal celebration photos ever. Here she celebrates the game winning goal against Indiana. To have a senior sink that important goal was great to see. 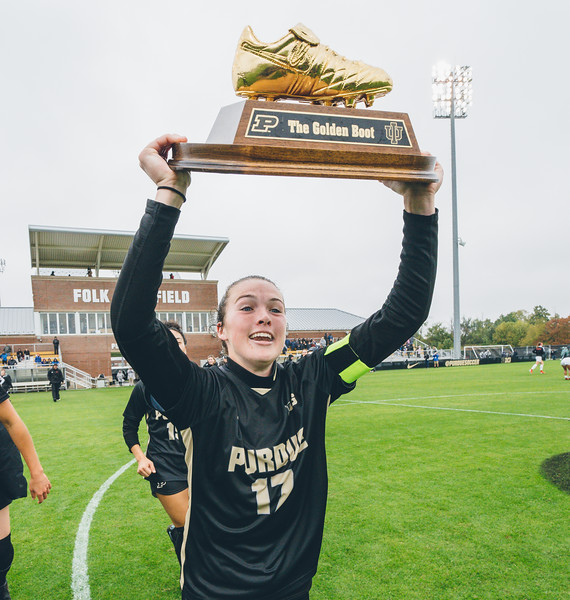 8. Here senior Teagan Jones hoists the Golden Boot trophy after Purdue defeated Indiana. I loved the enthusiasm of winning the trophy and the way that she sprinted to her teammates with it. This old man had to really work to keep up with her. 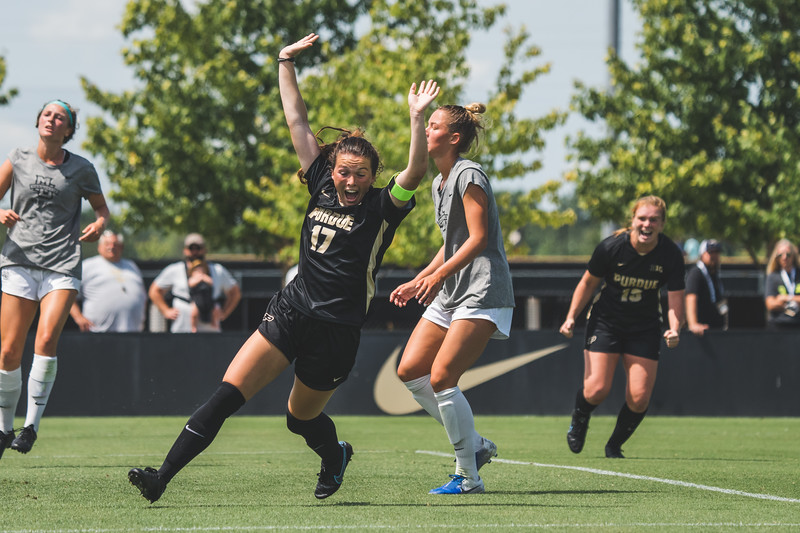 7. Here Teagan scores a goal in the exhibition game this fall. I love the excitement here. These are the photos that we dream of making when we are headed to the field.

6. The home opener had some moments of heavy rain that really made things harder on the field. Here you see a bit of that in one photo. You have the Kentucky player down with Sklurr Patrick taking the ball up the field. It was a fun moment on a great day. 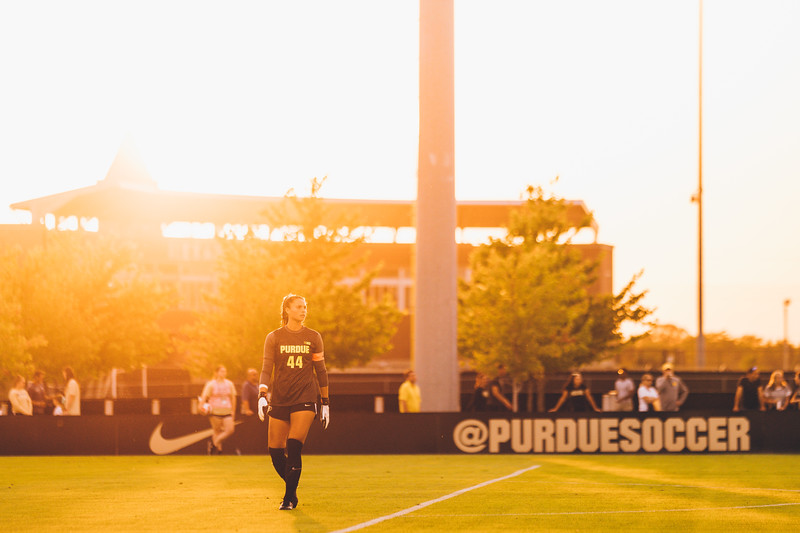 5. Folk Field sunsets are the best. You have so many options to make photos. On this day I was just there for fun so I stayed with the light to make some interesting photos of goalie Marisa Bova. The light was cool, and I was waiting for just the right gesture. I liked this moment.

4. I made this photo on opening night as the sun was setting. I was there for fun so I didn’t need to capture all of the action. After one half sitting in the rain I went up to the roof to make some photos of the packed crowd. I missed the game winning goal, but as I said I was there just for me so it didn’t matter. I had a cool stadium photo that I am sure you will see again in the next couple of months.

3. This spring we were lucky to get some soccer in. It was a Big Ten only slate, but it was still good to see some soccer at Folk Field. The flag was at half mast so it really showed up well in this photo. I liked how everything came together here for some reason. It was just a little different than my normal soccer photos, and was my favorite action photo of the year. 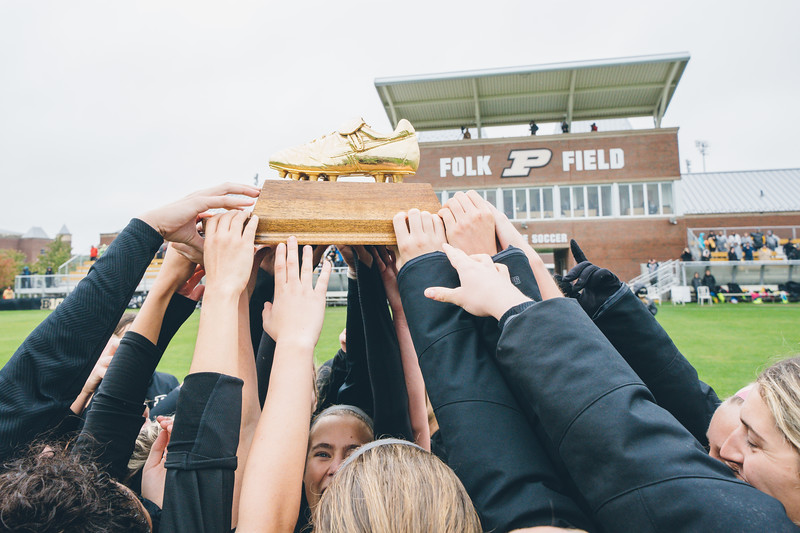 2. The Golden Boot is always a fun photo to make. The team loves it, and I wanted to get all of the hands on it with the stadium in the background. This never gets old making photos of this trophy. Next year it will be on the road, but in a couple of years I hope that I am there to make photos of it again. 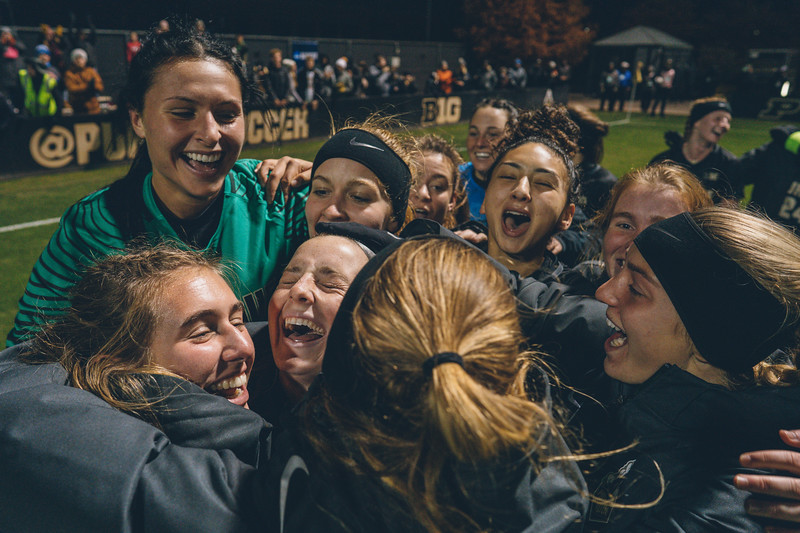 Can you tell by reading this just how much fun this past season was? I don’t know that it gets better than this. This was a special senior class that gave us a lot of great memories over the years. I don’t know what the future holds, but I hope that I can be there in the fall next year to watch another year of Purdue soccer. It is hard to boil a season down to 21 photos. It is even harder when you have two seasons to boil down in the same year. This was a special year though, and I thoroughly enjoyed helping document it. Now that my soccer season is over I will have an overall favorite soccer post coming soon as well. I really had a fun year making soccer photos this year.