Purdue Keeps The Golden Boot For Another Year

Sunday I went down to Folk Field hoping to make the photo above. I love the idea of another set of hands on the trophy. In 2015 I drove down to Bloomington hoping that Purdue would finally be able to grab this trophy again. I was very lucky to be there as they reclaimed the boot. Every time that I go up into the press box I see the photo that I made that night, and I am very proud of it. The good news is that the trophy has stayed at home ever since.

It seems like I have been photographing a lot of games in the rain lately. I will be the first to admit that it makes things a little harder, but I love the photos that come from it. You get more ways in your photo to show motion. You can see the mud and grass flying as the players are moving around. You can see the water coming off of the players heads on a header. I think that it just adds to the fun.

Sarah Does It Again

Late in the game Sarah Griffith scored her 14th goal of the season. At first they did not credit her with the goal, but it was changed the next day. She is now tied with Maddy Williams for the most goals scored in a season for Purdue. Maddy was a fun player to watch while she was a Boilermaker. I didn’t think that I would see someone so good so soon here. This year Sarah has definitely made Purdue soccer fun to watch. She can single handedly change the game. She will be the first to tell you as well that she has some great teammates that help her as well.

Ally Gets The Game Winner

It was great to see Ally Mussallem get the game winner for Purdue. A senior coming up big to keep the boot is always a fun things to see. Her sister was part of that team that brought the boot back to West Lafayette as well so it is a great thing that they can say that as a pair the trophy never left town.

This was the second straight shutout for goalkeeper Marisa Bova. I always feel like I don’t cover the goalkeepers as much as I should. Earlier this year I went out to the field and pretty much just covered defense when I was there for fun. In reality the way that Folk Field is set up the ideal situation would be to cover games with two people. One on the offensive end to make the goal photos that everyone wants, and someone on the goalie side of midfield with a longer lens that could get the action on both ends. Mo has been great this year, and I usually just end up with photos of her kicking the ball. Maybe I can change that on Sunday. 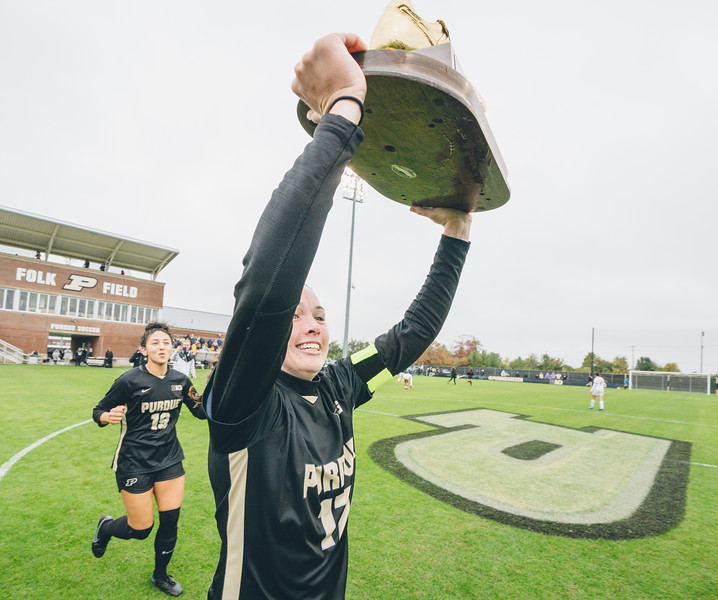 Here is a link to my photo gallery from the match. Right now I am not sure, but I hope to have one more soccer game this year as Purdue hosts the first round of the Big Ten Tournament on Sunday. In 2014 I photographed the Big Ten Tournament at Purdue for the Big Ten. There was one thing missing though and that was Purdue. It will be awesome to finally see the Boilers play in the tournament. They are the #2 seed as well so I hope to see them play in it for a while either live or on TV.