Purdue Sweeps Through Rutgers To Earn An Easy Win

Saturday after the football game I walked upstairs from the office in Mackey to make some photos of the volleyball team. I was a little late, but I didn’t think that I had missed much. Of course Purdue was rolling and I missed the entire first set. They breezed through it on their way to an easy sweep. I was able to make photos for two of the sets though which was very good. It capped off a fun week where I made soccer, football, volleyball, and baseball photos. It is always good to get out and change things up a bit.

When I ran upstairs I grabbed my camera with my 135mm lens on it from the football game. When I got up there I realized that it was my A9II. The camera is a good one, but it is not quite what the A1 is. It was fun using it again, but the buffer was agonizingly slow to clear. It is amazing how fast the A1 clears its buffer with a file that is twice as big. Sometimes you need to step back a bit to appreciate the gear that you have. 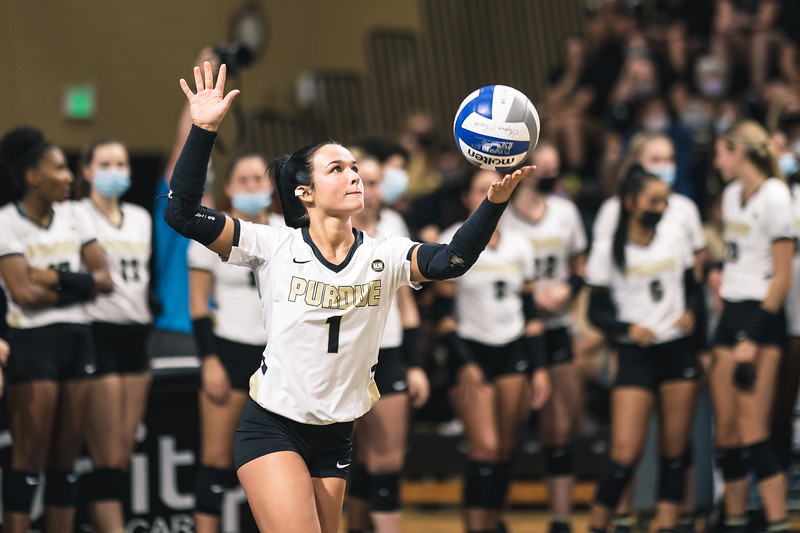 This game occurred on Saturday and here I am writing about it on Thursday. So much happened last week that I got a bit behind on my posts. The day after the game though I posted my gallery from the match. You can find that here. Sometimes I like to talk about the games though so that post comes a bit later. Of course now Purdue has already played a road game at Illinois and won. This is not the most timely post, but I wanted to make sure that I gave the team their due on the blog. Now that I am caught up on last week this week will start to pick up again. The good news is that I have plenty of content for the blog.

A Lot Of Faces

The good thing about a blowout is that you get to see a lot of faces that you don’t normally get to see on the court. The bench can clear a bit, and you can make photos of some of the athletes that do not get as many photos as the year goes on. As a professional bench warmer I am always trying to make photos of those that don’t get as much playing time. These kind of games make it a little easier as more players get in for a longer period of time.