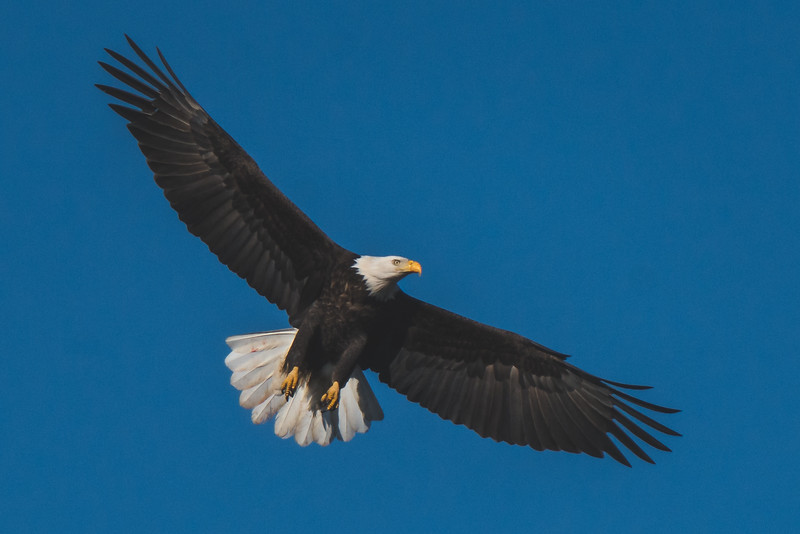 A Beautiful Day With The Eagles

Yesterday when school was over I was going to head to the Celery Bog for an hour or so. The light was beautiful and I wanted to make the most of it. When I saw how windy it was and that it was coming from the southwest I decided to head to the Wabash to see if I could find any eagles. I lucked out and at times there were four eagles flying around. The group of four did not stick around for long, but it was cool while they were there.

The afternoon started off with this immature eagle flying around. I pulled over to make a few photos of it before moving to my final spot to see the eagles. No matter what I had a good photo already in the bag. That is always a good feeling.

For a brief moment there were four eagles in the vicinity. I love it when eagles show up because as they circle looking for food it gets other eagles off the perch and flying as well. It worked to perfection here as the eagle that had just been sitting in the tree spotted this fish and went in for the grab. The only strike I saw on the day was a successful one.

When the eagles are flying you can lose track of time. I thought that I was at my spot for a half hour or so. When I looked at the metadata I realized that there was only twelve minutes in between my first and last picture made. I made some good photos and three of the four eagles had left so I decided to take a drive up north to where I have found owls and harriers to see if they were hunting. The wind and sun combined with a warmer day should have meant that I saw a lot. I ended up coming up empty. I should have stayed right where I was. You never know though until you try though. This was a lot of action in twelve minutes though and I am super happy with what I was able to capture. Now the bar is set and next time I hope that I will get a little more fishing in from the eagles.

Right now I couldn’t be happier with the way that the Sony A7R4 and the Sony 200-600mm lens work together. I have the Sony 1.4 tele on as well and it gives me a wide range to make photos with. Last year I was debating which camera to use for birds. The Sony A9II would give me 24 frames per second which is nice. The Sony A7R4 on the other hand gave me 60 megapixels of resolution. That resolution lets me crop into a photo like never before with the detail still intact. It is amazing. I think that my old sports gear is going on the market because for what I do right now I have my setup.

4 Replies to “An Afternoon With The Bald Eagles”