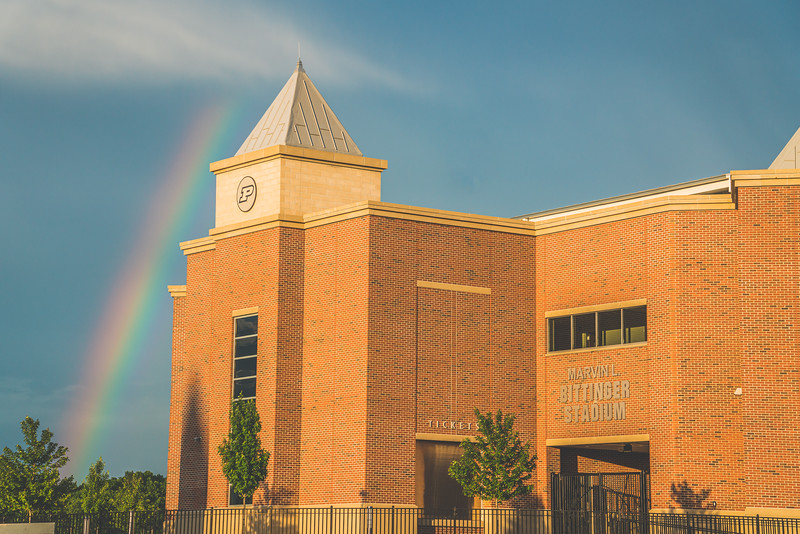 Last night after dinner we were outside and saw a rainbow forming. The light and clouds looked like it would be one that would stay for a few minutes. I of course had a bag packed with gear so my daughter and I jumped in the car and made our way to campus. I really thought I only had a few minutes so we were deciding the best place to make the photos. At the last minute I decided to head to the sports complex because my options to move would be better. Out there you have more room to make a photo. It turned out to be a good move as I was able to make the photo above.

The Fun Of The Chase

My little one was enjoying watching her dad run around the area with his camera like a madman. She stayed on trail while I plowed through some weeds to get an angle of the softball complex. Of course that angle wasn’t as good as I would have liked, and I ended up using a different angle for these first two pictures on the post. I did pick up two ticks for my effort though which is a bonus!

When we drove over to the basketball stadium I was hoping to get that shaft of a rainbow over Mackey. Mackey is a hard place to make photos especially now with the parking lot adjacent to it shut down for construction. I knew that it would have to be right place at the right time. My normal spot was not working, and that is when I saw the other side of the rainbow showing up. It was over Lambert Fieldhouse, but maybe it would connect over Mackey! Of course the conditions were not right, but maybe with more rain in the forecast in the near future this can happen.

As with any six year old the chase got old quickly. This wasn’t nearly as cool as YouTube. We did sit up on the steps leading to Ross Ade watching the rainbow fade over Mackey together though. I love these moments when my little one can see what I do. Even if that means that I look like a crazy man running around everywhere.

As a young man I can understand how I would want to make baseball photos. But rainbows? I am not sure I would have been into that. They are fun to chase and try to put into the right spot. The fun is trying to put the rainbow in an interesting situation. Here at baseball that was not so easy. It was not high enough to use the front of the stadium. Off to the side here there was only a narrow window where it would work. It did work though, and allowed me to have the pot of gold show up in the stadium. It was at this moment when I wished that I had a key these stadiums. There is no reason why I should have one, but it would have been nice to have the rainbow around the new center field backdrop. Having a key to the soccer practice field would have allowed me to get the soccer stadium involved in this photo session as well. A younger Dave would have hopped the fence, but this older guy would probably just get stuck on it.

The Science Of Rainbows

Over dinner on Thursday we talked about the science of rainbows. I brought up the magic 42 degree number. My wife hadn’t heard of it so we watched a couple of videos right after dinner where they talked about the magic angles that create the rainbows that you see. One of those videos I have linked above to help you make better decisions on when and where you might see a rainbow. You also realize why the number 42 is the answer to life, the universe, and everything.