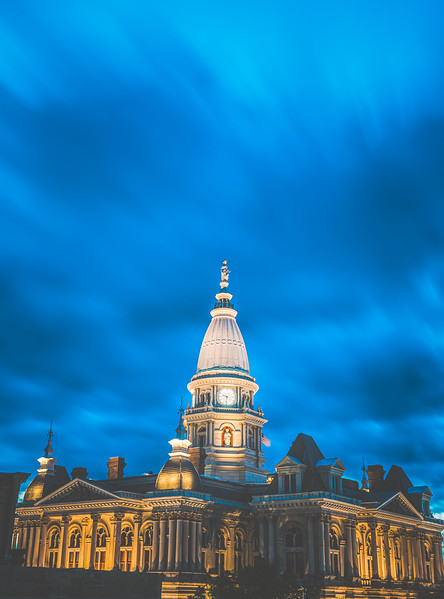 Catching Blue Hour In Lafayette From A New Spot

Last night I went up to campus to make a photo at sunset. The clouds were lining up against what I had in mind. I decided to try a spot that I had never made a photo from overlooking the Lafayette courthouse. I know that this spot has probably been used by hundreds before, but I wanted to try it out. The sunset didn’t pan out, but the good news about that is that you always have blue hour to use. Of course the clouds moved in for that too. I decided to use those clouds to my advantage. When I left the house last night this photo was not even in my head. It is part of the fun of photography when you work through a few problems to come up with a photo that you like.

Last night was a night where things were constantly changing. Plan A was to make a photo of a certain bird at the Celery Bog in some good golden hour light. That didn’t come to pass. Plan B was to make a photo of the baseball stadium that I have had in mind for a while. The clouds moved out of that part of the sky ruining that photo. Plan C was the sun hitting the clouds over the courthouse. Of course the sun was obscured right when things would have started getting good. Plan D was to make a blue hour photo from here. As a line of clouds moved in quickly I realized that my photo would not look like I was thinking. I decided to go with it. I pulled my Lee Big Stopper out of my bag and put it on my lens. This is a filter that blocks out ten stops of light. This lets me slow my shutter way down and allows me to drag the clouds. I love this effect at blue hour. The clouds look so cool. With the way that the Sony is set up using the ten stop filter has never been easier. I used to have to do math to figure out exactly what my exposure should be. Now my LCD screen shows me exactly what it is. Technology is pretty cool, and it helped me transition to this photo pretty quickly.

2 Replies to “Blue Hour In Lafayette”