This week was unprecedented. I never thought that the rest of the sports season would be gone so fast. Yesterday of course my Facebook account gave me a memory of 2010 when Purdue was in the Big Ten Tournament. It reminded me of what a crazy year that one was. I thought that for fun I would look back at that end run of the season to final game in Houston. I will warn you that I am feeling long winded so strap in.

The place that I thought of first was Columbus. Purdue had lost a crazy game in Mackey to Ohio State. Despite that loss Purdue came into the game ranked #4 in the country and getting a lot of buzz about being a National title contender. The won a dogfight against a very good Ohio State team. It took a great effort to come away with the win. As I pulled up to the stadium the Black Eye Peas came on the radio. I never liked the song “I Got A Feeling” before that night. I had a feeling though that night and that is why I made the trip. Purdue won, and had me thinking of them hoisting the trophy at the end of the year. Of course right after this game we made the trip to Minnesota. I don’t remember what happened there.

My seat in Columbus was not the best. I was stuck in the back row of the stadium, but I was at the game. That was all that mattered. Someday I will make it back to this arena and make photos from the baseline.

My old seat in Mackey gave me a decent view of the senior day celebrations. For some reason they always did them facing me. I loved the way that the students used to really feel a part of the team. They always had great shirts that I tried to get my hands on. Somehow I ended up with this one. 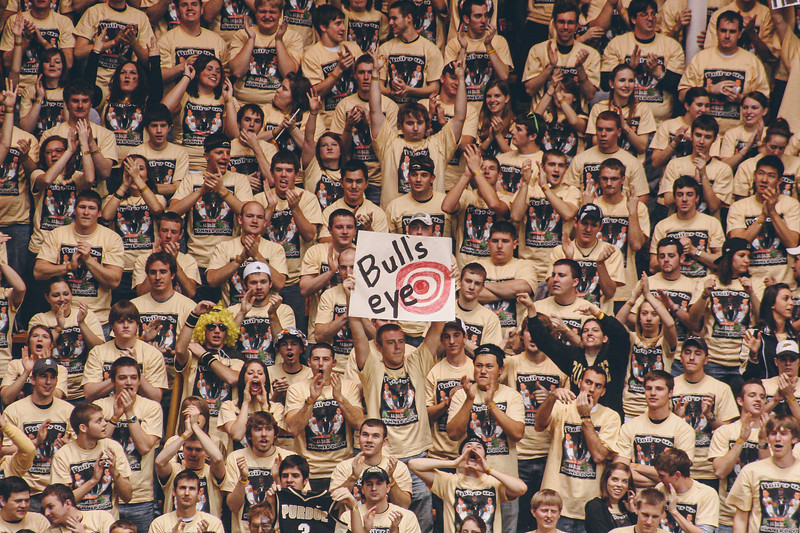 When I came across this photo from senior day I paused for a minute. Now that I am at most of the home games I do not listen to the radio call as much. I used to be on the road a lot and the Cliz was a regular listen for me. Cliz has been fighting a big battle the last couple of years. When I covered the alumni basketball game in 2018 I thought that I wouldn’t see him at the first regular season game that year. He looked that bad. He has fought his guts out though, and was still on the broadcast team as the season ended. I really hope that I get to hear him on the call again. 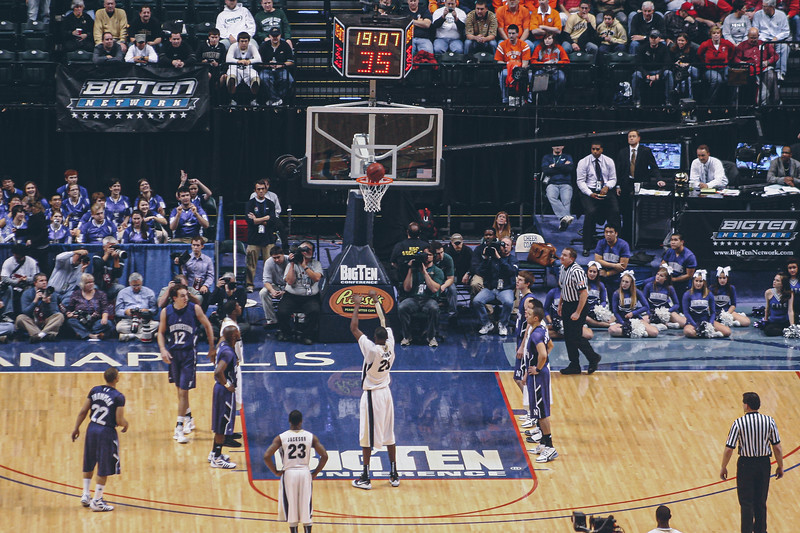 The Big Ten tournament was interesting. Northwestern was an easy first round opponent. Then Purdue played Minnesota again, and I have no recollection of that game. It led to all of the bracket prognosticators picking against Purdue in the first round. They thought that the #9 team would take down the #4 Boilers. 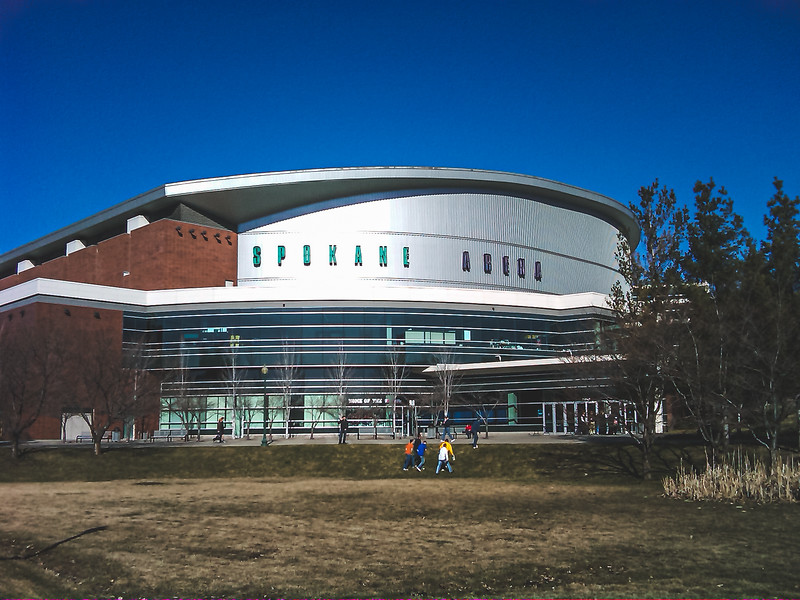 When Purdue was announced on Selection Sunday I was in the Emergency Room with my mother. It was nothing serious, but it was still an interesting place to watch the show from. I wasn’t there for me, but I should have been because I was thinking about heading to Spokane. Luckily nobody else from Purdue was so I had some pretty good seats to watch the games from. 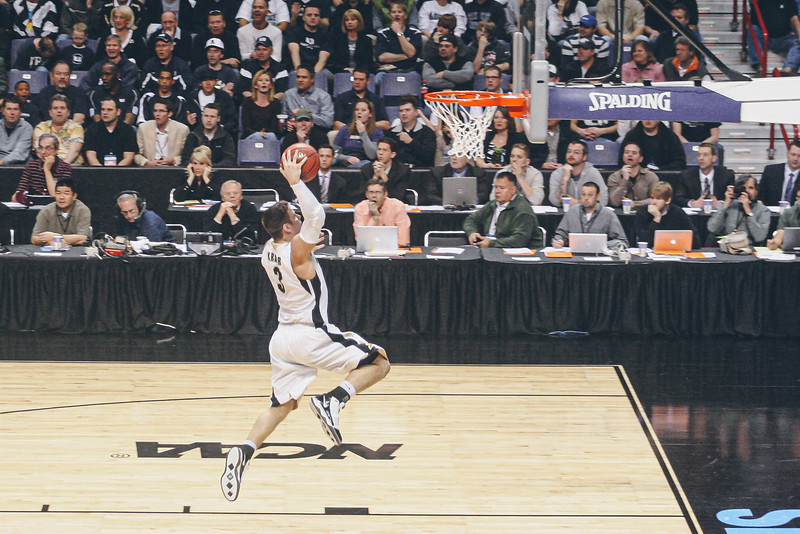 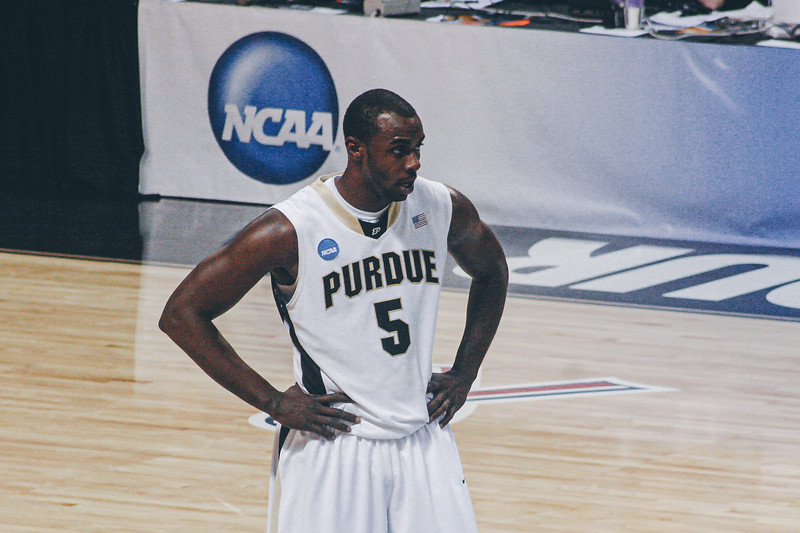 This was the lock upset pick for most of the talking heads. Purdue was no good without Robbie Hummel. They were going to get run out of the building. Of course that didn’t happen. Purdue used two great seniors to propel them to the win. A guy named Johnson wasn’t too bad either.

Looking back through these photos I realize how great this team was. Chris Kramer played the game the same way that I played. It was all out all of the time. This was a typical Kramer play as someone was headed to the floor. 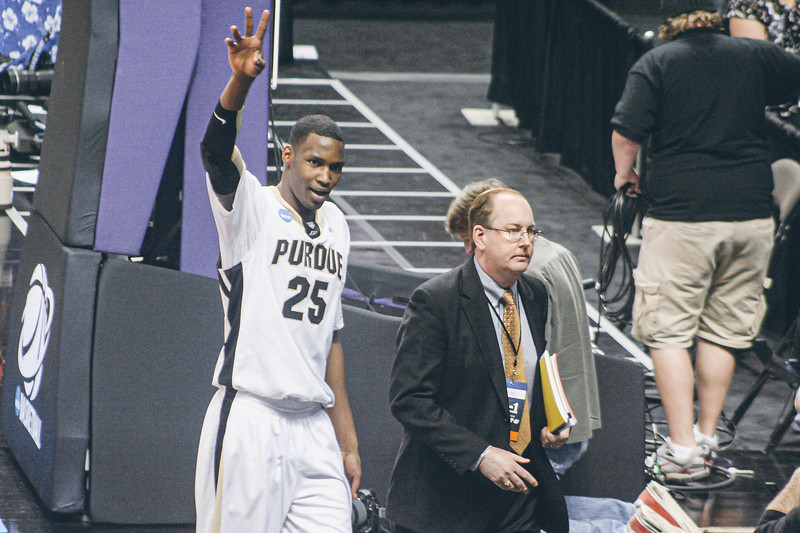 Part of the fun of going through these decade old photos was seeing familiar faces. People that I have worked with or around the last few years. I had no idea who the people were then, but over time I would. It really makes this journey that I have been on so much cooler. As if it wasn’t cool enough already. 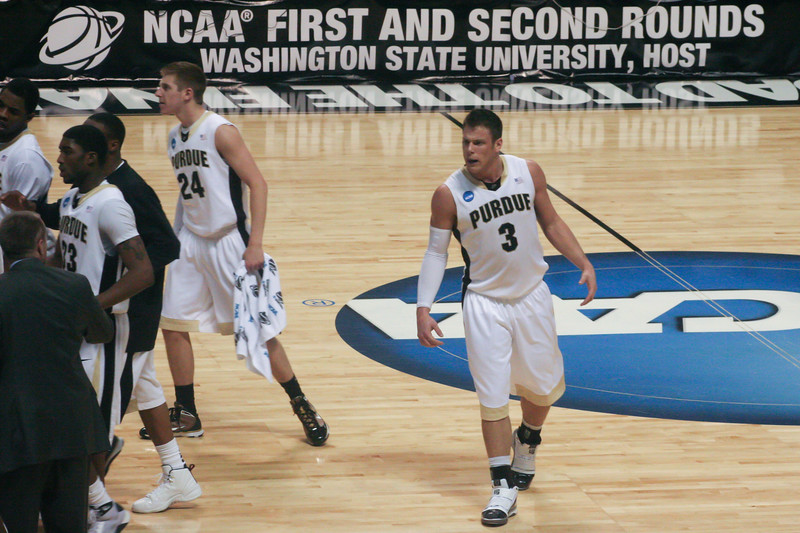 You Can’t Bring That Camera In Here!

From Columbus, to Indy, to Spokane I kept running into no dSLR rules. At every place my camera went in with me. The secret was a great placement in my jacket which was slung over my arm. In that same arm was a book that was somewhat interesting. I would try and pick out the security person that might be interested in it, and more often than not I was right. They would be focused on the book and not the coat with the large lump in it. That was a great way to sneak a Canon Rebel with a 18-55mm lens and 75-300mm lens into the stadium. 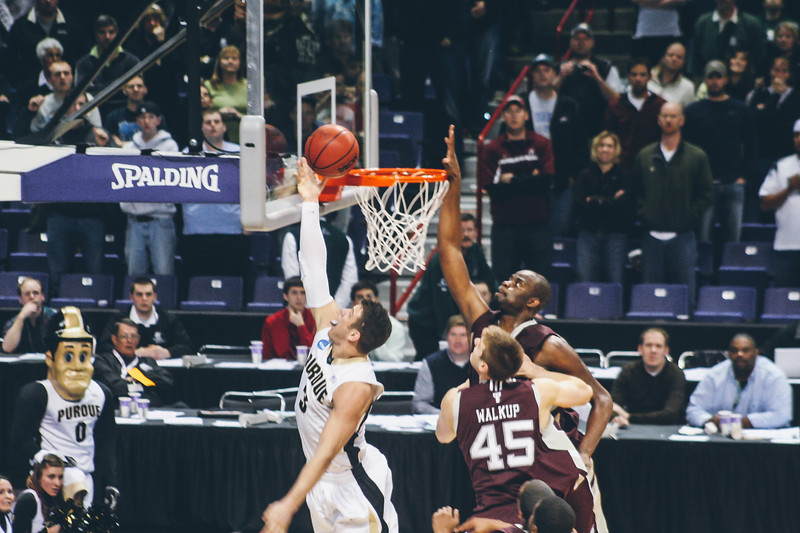 This was the photo of Chris Kramer sending Purdue to the Sweet 16 in double overtime. At that point it was my most successful sports photo. Looking back at it now I see all kinds of things wrong with it. The idea was okay, but my gear really limited me. The funny thing is that I wasn’t even going to photograph this play. I was so nervous though that my hands were shaking like crazy. When I picked my camera up they calmed down. Life is easier through the lens. After this shot went in I asked the couple in front of me from Houston if I could stay with them the following week. I realized right then that friendly banter during a game didn’t mean that you could stay at someone’s house. 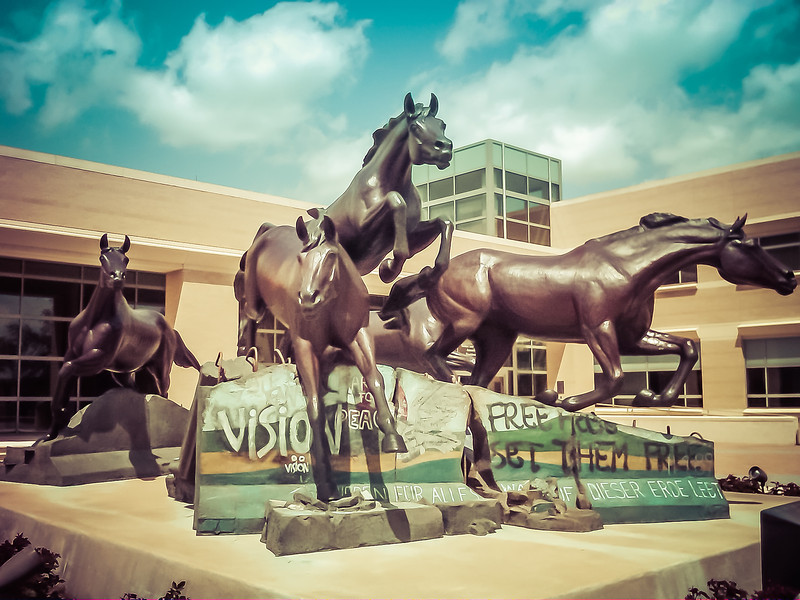 Making The Most Of The Trip

While on the trips to watch basketball I made sure to check out other things of interest. I caught several baseball games at different schools as well as visited two Presidential Libraries. The photo above was made with my phone outside of the George H.W. Bush Library in Houston. Just down the road in Austin was the Johnson library. For some reason at this point I thought that my phone was just as good as my dSLR. I was wrong, but you can’t go back and remake the photos. This was one that I thought turned out pretty nice.

The Final Game Of The Season

The last game of the season was played in Houston. Purdue was supposed to get bounced in the first round so even making another road trip seemed like a bonus. This was a last minute trip that you could only book if you were single. Without much thought I bought a ticket and made my way to Houston. I wasn’t ready for this season to end. It did end though, but I was so glad that I could follow along with it. This was an amazing team with one really bad freak injury that derailed what would have been a special season. Until this week I didn’t think that I would see anything quite like that again. Below are a couple bonus photos from the last game of the season. 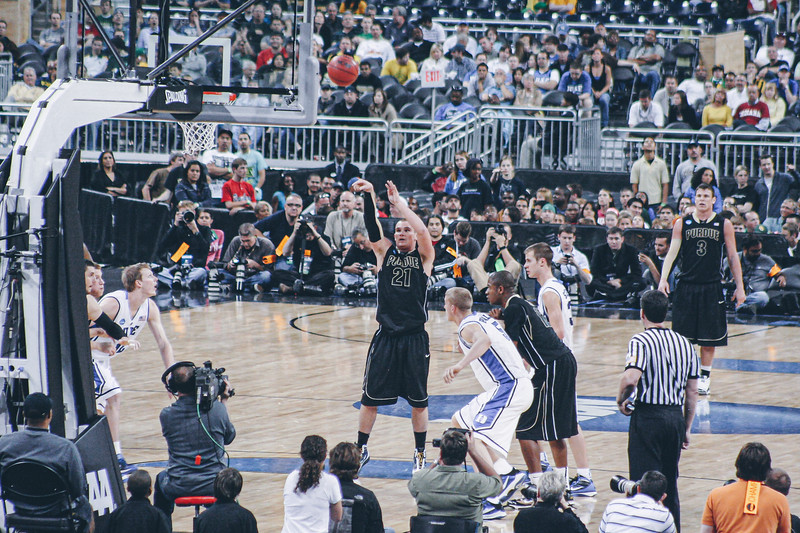 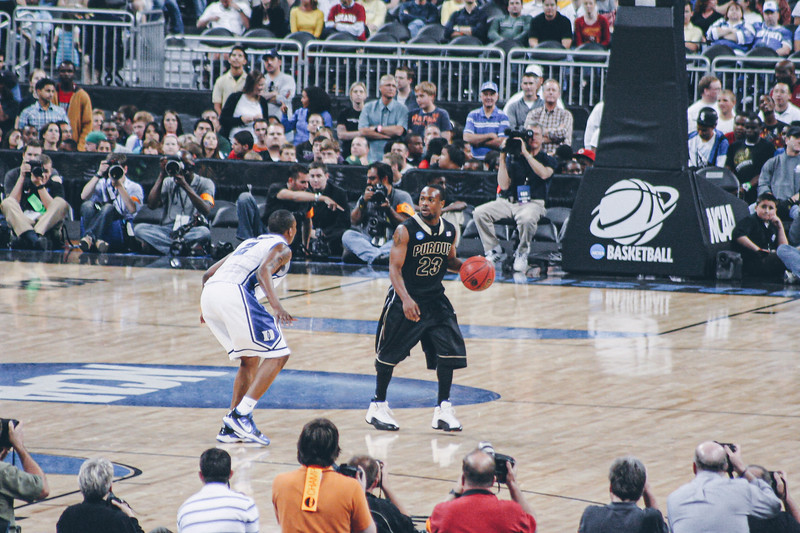