My 19 Favorite Basketball Images Of 2019

Basketball is a weird sport. I usually put out a best of gallery from the season, but when the end of the year comes I always wonder if I should make one for the year as well. I was not going to do so this year. As I started thinking about the cool places that I was able to travel to I decided to give it a go. I really had an amazing time making images, and I was able to travel to some cool stadiums along the way. Below are the nineteen images that I came up with from 2019. 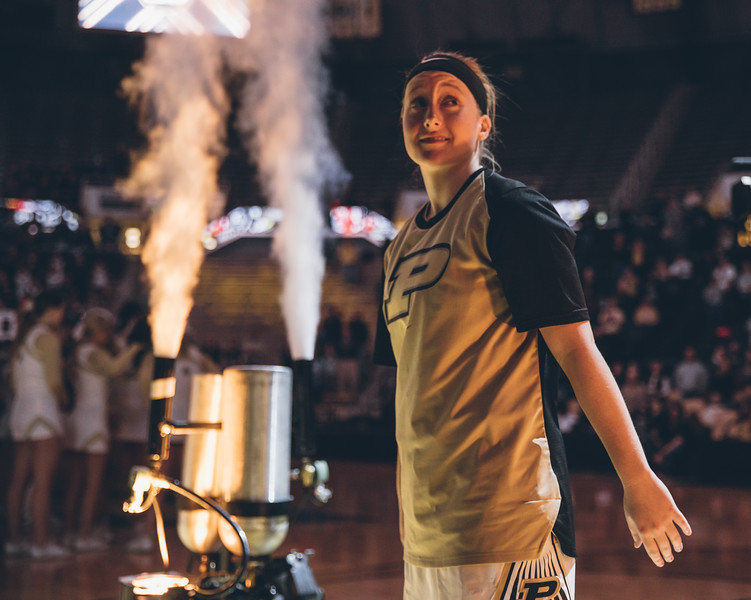 19. This is why I call it my favorite photos, and not the most technical of the year. This is not my most technical photo ever, but I love everything about it. Abby Abel was one of those players that was bigger than the game. They did so much for the program before they set foot on the court. As her time as a Boilermaker was winding down I made this photo of her during pregame intros.

18. This season started off with me on the opposing side quite a bit. It is fun to see the reaction of the opposing teams as the Purdue light show is going on. The light that they give the coach for the huddle makes everything looks just about right. 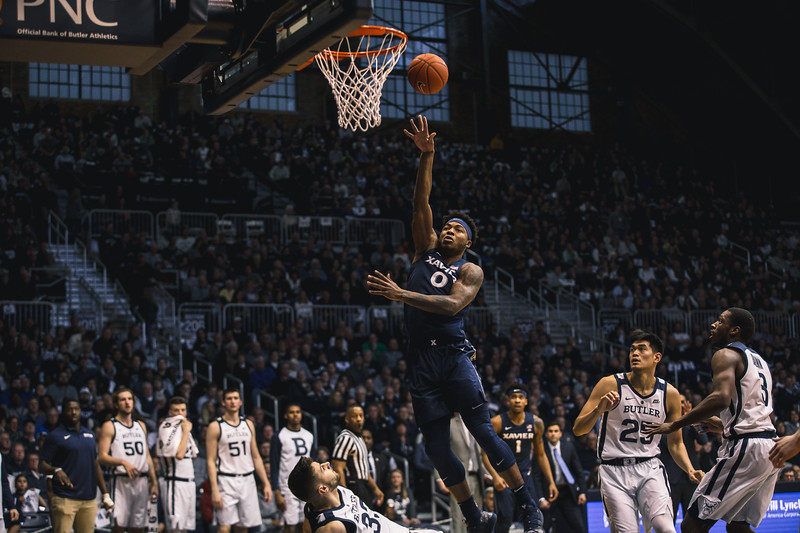 17. Tyrique Jones is a fun player to photograph. It seems like he has made this list the last three years. Here he gets a shot up on Butler at Hinkle. He later dunked on Joey Brunk so hard that Joey left Butler. I love these wider photos showing off a little bit of Hinkle Fieldhouse. 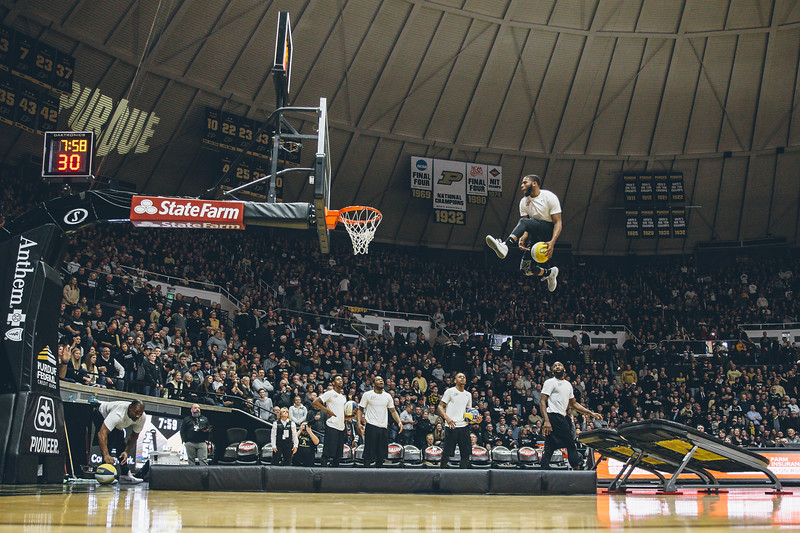 16. This is not game action, and I was not even paid to be there on the day. It was my first game of the year last year though, and this halftime show was amazing. These young men were so high off the ground that it was insane. This makes it on here just for the athleticism.

15. I love these quite moments before games. With my new Sony gear I have a truly silent mode that helps me make these photos without interfering with the moment. Banker’s Life Fieldhouse has all kinds of little tunnels that make for good photos.

14. Sometimes you just have to pan. Here at a game where I was testing out some new gear I decided to pan for a while in the 2nd half. This was my favorite image from that time.

13. One great surprise last spring was the fact that I was able to catch senior day for both the men’s and women’s teams for Indiana State. I had photographed many of these athletes a lot so it was great to finally get back down to the Hulman Center one more time for them. I love the emotion here as well as the baby blues. The people at ISU are so nice to me that I need to get down there more than I do.

12. I did not expect this moment. This is one of those things that just happen, and you happen to be there for them. I think that part of my job is to bring the fans into situations where they cannot go. This great smile and moment pregame for Purdue is one of those times. 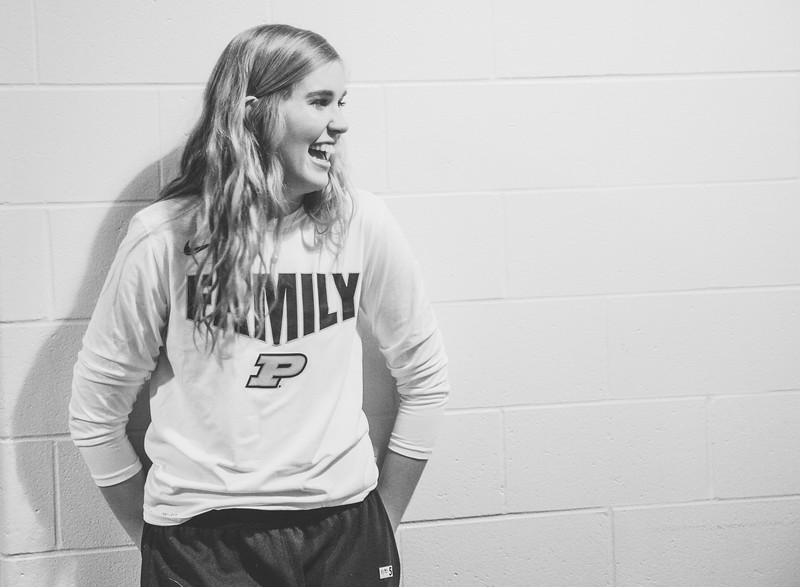 11. Nora is always good for a smile, and this moment before a Big Ten tournament game is one of those times. This is another moment behind the scenes that is fun to capture and show the fan base. These last couple of images are what makes going to the games so much fun. The action is nice, but these are always my favorite photos.

10. You just knew that I would find a way to sneak an extra photo in this countdown. The top photo of the two was made just after the t-shirts were laid out before the t-shirt game against Virginia this fall. What makes the photo special is that my daughter walked around the rim of Mackey with me making the photos. Having her at my side makes my photos just that much more special. The bottom photo was at the tip of the t-shirt game late in the 2018-2019 season. This photo now hangs in Mackey just as you walk into the athletic ticket office. Whenever I walk in with my little one she points out the photo and says “daddy that one is yours.” I am always proud of my work, but when it is hung big it really makes you proud. When your little ones enjoy it that just makes it even more special. Enough corny talk. Let’s move on. 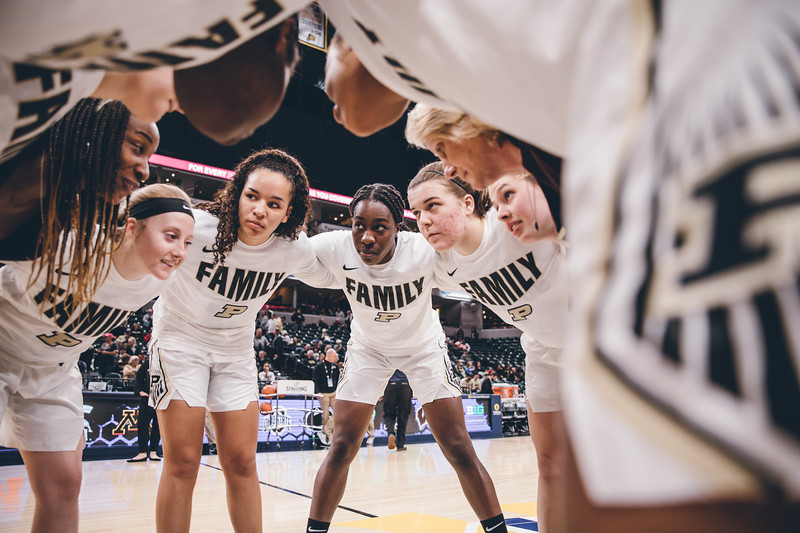 9. For some reason I have always loved this photo from just before the Big Ten tournament opener for Purdue last year. I photographed Purdue down in Indy in 2014, and then didn’t for the next several years. It meant a lot to me to be back there photographing them. It was part of an extremely busy two week span in March for me.

8. This is from this past December in Banker’s Life Fieldhouse as Purdue was being introduced. I love the old look of the windows as well as the spotlight coming right into my lens.

7. Here is another photo that I lucked into. I will be honest. When I made it to Chicago to photograph the Xavier women’s team in the Big East tournament I was running on empty. I had just travelled to games in Indy, St. Louis, back to Indy, and then Chicago in a four day span. When I made this photo though the adrenaline kicked in, and I was ready to go. I love it when I decide to photograph the huddle and I get surprised. I love it when the surprise is facing me as well. 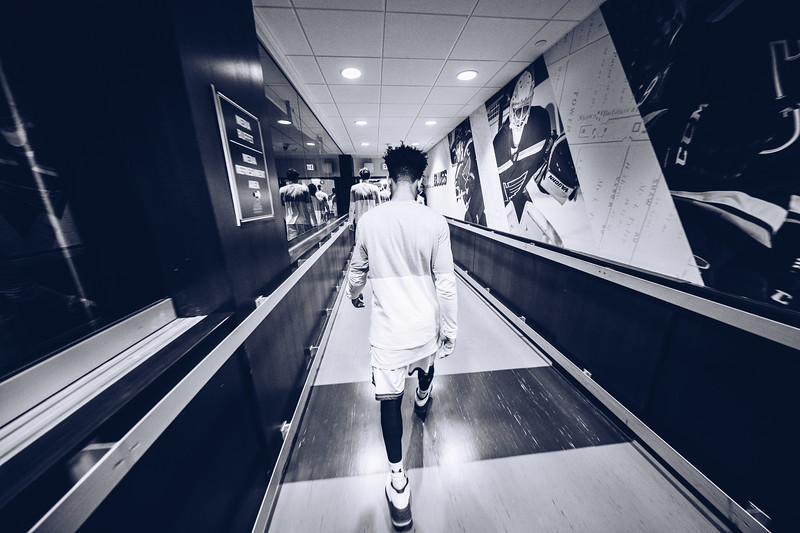 6. Part of that crazy few days in March was seeing Indiana State play in St. Louis one more time. The way my schedule was looking I was not sure that was a possibility. I love this big game atmosphere, and the great way that the MVC puts on the tournament. As I write this I don’t know what this year will bring. I love seeing the Sycamores play in St. Louis, but if this was the last time that I would see them play down here then this image is a good one to go out on. 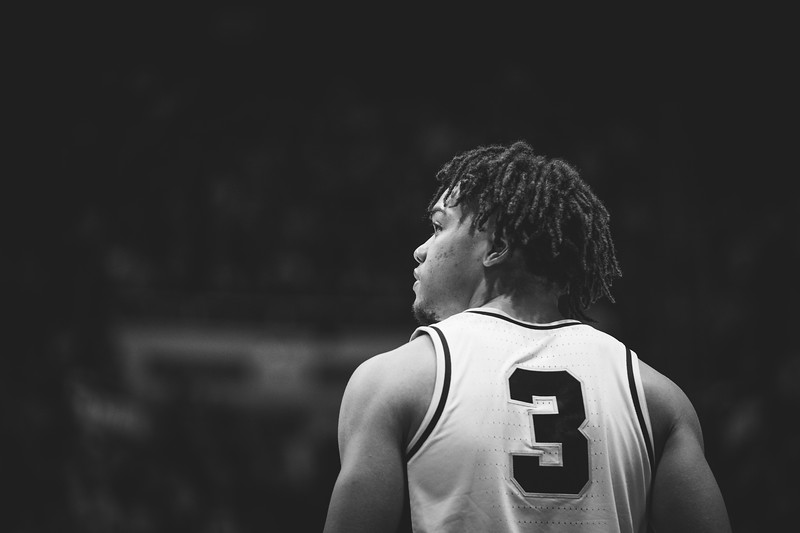 5. Carsen Edwards was a player that I will be telling people about for a long time to come. Players like him don’t come around very often. Here I caught him looking up to the rafters where I knew his number would hang soon. I thought that it was a fitting photo to sum up his Purdue career.

4. The next two photos are IU related. The schedule worked out in such a way that Purdue would play Indiana three times in three days in three different sports last year. The teams wore black for the games, and it was a fun weekend on campus. Here Karissa McLaughlin hits the game winner to seal the sweep against Indiana. 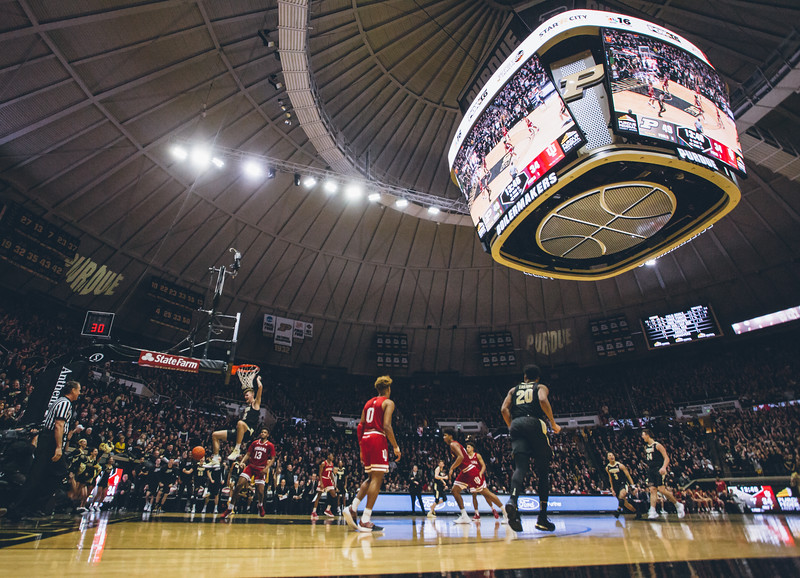 3. A Matt Haarms dunk is always a cool thing to capture. I had a remote set up to do just that against Indiana during the weekend I talked about above. I love the way that this captures the whole scene. I have my handheld image that was tight on the dunk, but this wide shot has always been a favorite of mine.

2. This photo has come up a lot on these lists. I was not even photographing Purdue this game. I was the Northwestern photographer as Karissa McLaughlin hit another game winner. With no photos to make for my team I captured the emotion of the game winner. It was a great moment that the team really wanted on senior day. 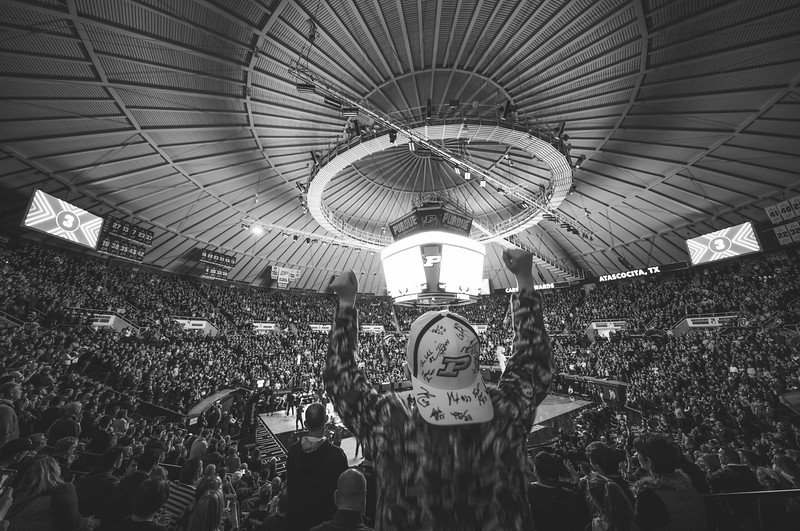 1. Of course the top photo would not be about the action. It is more about chance than anything else. I was up in the stands to make a wide photo before the Purdue game to start the year off. I should not have even been there. I had just had surgery that day for some foreign substance growing in my body. I was on a weight restriction, but after Tyler Trent passed nothing would keep me away from the stadium. My eyes were still wet from the tribute that they played for Tyler when the Purdue intros started. I had a clear view of the happenings when a fist started coming into my photos. I looked down at a young man dressed like Tyler used to dress. I quickly recomposed and got lower to include this enthusiastic young fan in my photo. It was pure luck, but my favorite photo of the year. 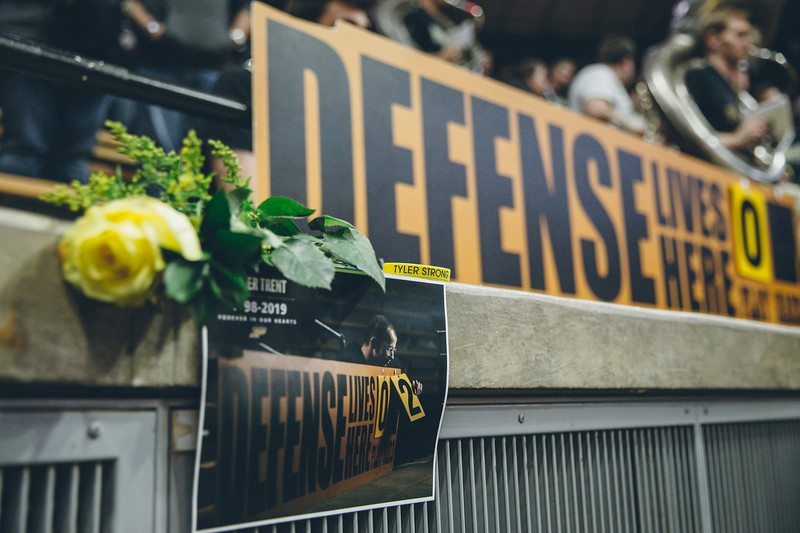 Bonus: The year started off on a sour note for the Purdue family as we lost Tyler Trent. Tyler was an amazing young man that will forever be a Boilermaker. Early on Tyler gave me one of his wristbands. The only time that it has come off since I received it from him was to put it up on the rail for this photo. It is still on my right wrist.