Purdue winning their first two games in the Big Ten Tournament meant that I would get to photograph them Friday night in Banker’s Life Fieldhouse again. This team has some great pieces that make them fun to watch. I was hoping to get to watch them for two additional games this season, but that was not meant to be. They faced a tough team that was apparently very deep. Rutgers was subbing out five for five often during the game. That has got to wear any team down. Constantly facing someone fresh will do that. Purdue fell at the end of the day, but they did have a good run in the tourney.

It seems like once the tournament starts I start photographing in tunnels. It actually started last weekend at Indiana State. I love these behind the scenes moments because it lets you see the people behind the team. You can let the fans see things that they cannot see from their seats. Here is a moment from pregame that I loved.

I have photographed a lot of college basketball, but I have never been in the building during the same time as Red Panda. I stayed court side to edit photos and also made a few photos of this amazing act. She is amazing at making these bowls fly through the air right where she wants them to. She would be an amazing person to help me unload the dishwasher. 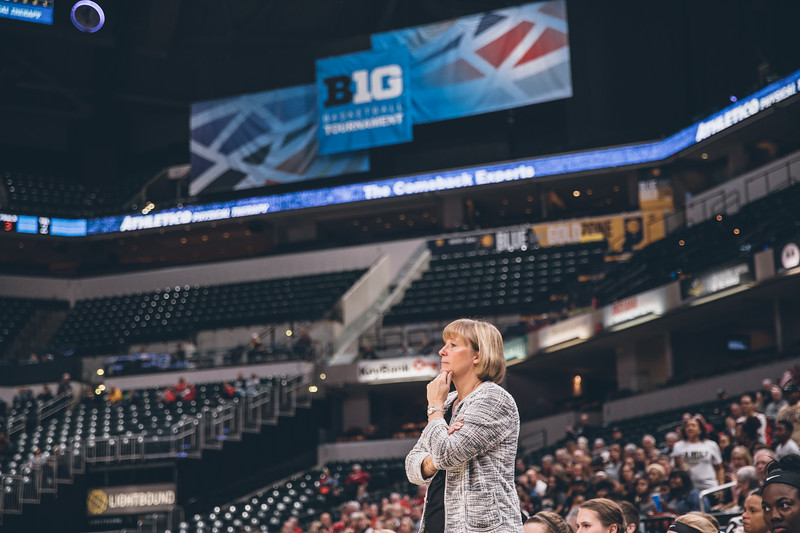 I might be the only photographer that works to put signage in their photos. At a big event like this it is an easy way to help tell the story. I actually moved over during the second half to help me get more of it in my photos. I would rather have a cool sign that tells the event than empty seats.

The End Of My Season?

By the time this post goes live I will have probably shot my last basketball game of the season. I normally do not enjoy the long haul of the basketball season. By the end I feel like my photos all look the same as they did at the start. This year though I have had a blast making basketball photos. As I write this I have one game left in my season. I don’t see me shooting any other post season action so I will end it on a high note. I will have shot five games in five days in three different states. If you count my weekend at Indiana State I will have shot basketball on seven of the last nine days to end the season. That is going on with a bang. Of course I feel that I am shooting really well getting so many reps in. I want to keep going, but the season is changing. Weather permitting I have baseball this week along with some diving.