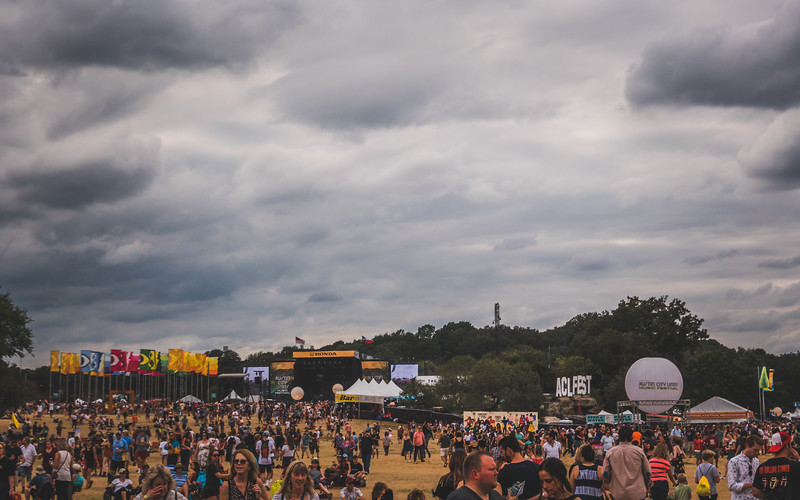 Back At The Austin City Limits Music Festival Again

Last year as we left the Austin City Limits Music Festival I really thought that it was for the last time. My brother-in-law was leaving Austin, and I just didn’t see any way that we would be back. Maybe in a few years, but not this year. Then the lineup came out. It was stacked with people that we loved, and on the fall break of our oldest. She would finally be able to attend. The decision was easy. We would be back for at least one more year.

We flew in Friday morning and went straight to the festival. We camped out in between the Homeaway and American Express stages. That was where the action was, and at the end of the day it was an amazing back and forth of talent. You had David Byrne, Manchester Orchestra, The National, Hozier, and finally Paul McCartney. It was a great lineup. I walked up the hill to hear Sir Sly sing their song Run, but other than that I stayed in the same area.

For this trip I brought a new camera. After reading some of the reviews I decided to purchase the Sony RX100 VI. You would think that I have enough cameras right? I can’t take any of them into the festival because of the fact that they have detachable lenses. That makes them a professional camera. That always makes me laugh. I have seen great photographers do amazing things with terrible cameras. The fact that a lens can come off makes it a professional camera though. Anyway I bought this new point and shoot to take into the festival. After making images on day one I ingested my card full of images to my computer. The burst mode on the Sony was much faster than I thought it was so I had way too many images to go through at once. I picked a few favorites and decided to edit the rest when I was back in Indiana. Because of the quick turnaround I pulled the card out of the computer and formatted it for the next day. I didn’t realize that Lightroom decided the new 64GB card in the camera was a drive so it didn’t copy any of the files over. It just gave me a thumbnail of each file. That means that I lost everything that I made on day one. Luckily some of my favorite shots I had already uploaded to SmugMug, but the rest was lost. I learned a huge lesson here. I normally don’t format so quickly, but I only have one good SD card now because none of my cameras take them. The good news was that I was not being paid for these images. I guess I am not a professional after all even with a detached lens after a mistake like this.

On a higher note my wife and I were able to see The National together again. For some reason they kind of became our band. My wife had always liked them, and it seemed like our early trips together they were in the background. Of course I quickly liked them as well. When the lineup for ACL came out they were one of the reasons that going was a no-brainer. They came out and played a great show. They were basically opening up for Paul McCartney, and they talked about how cool that was. It is always great to see them perform again. They really were the soundtrack to the early days of my relationship with my wife. They continue to put out great music, and I think they are the direction that the business is heading in. With the internet allowing people to be heard the musicians are making their way back. For a while it just seemed like we would always have autotune, a pretty face, and live lip synching. Indy bands like The National show you that real music is coming back.

Of course the highlight of day one was seeing Paul McCartney live. I saw him eight years ago in Indy, but this was the first time for the rest of our group. When you see Paul live you get a little bit of a history lesson in music. I couldn’t help but think that some of these songs that he plays live he has been playing live for over fifty years. You wouldn’t know it though as he puts on a great show. In fact his band leaves the stage for a break at one point, but he stays out to sing. He is amazing at his age to keep going like he does. The energy of the crowd was amazing making this a memory that will last for a long time.

With a music festival all weekend and then a travel day on Monday I was not able to get my weekly gallery of my favorite photos up on Sunday like I normally do. In fact it didn’t go up until this morning. This was a fun week though with some different photos made with a point and shoot and my phone. You can view my favorite photos from last week here.