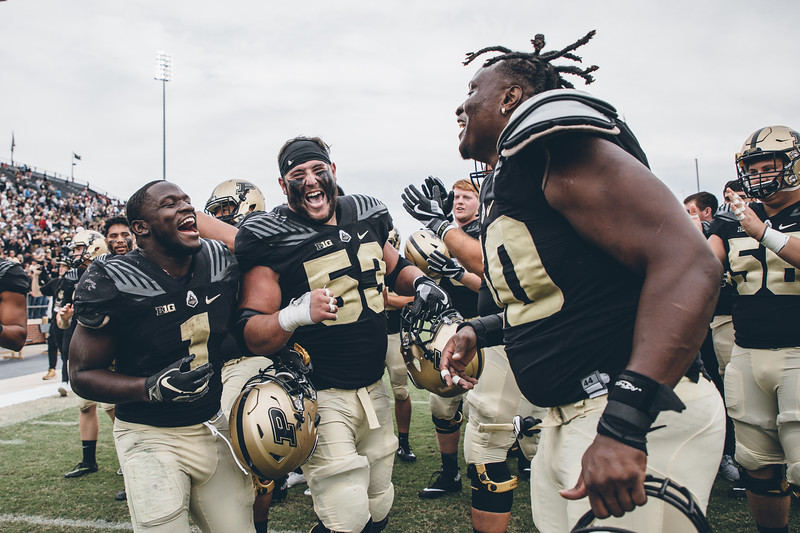 Taking Down A Ranked Opponent

When Purdue won Saturday afternoon it was the first win against a ranked opponent since 2011. I was at that game and I remember hoping that the crowd would rush the field so that I could make photos down there. I was still two years away from being down there. The fans acted like it was no big deal, but it really was a big deal. I remember Danny Anthrop trying to get some students to start coming down. It was one of those moments where the players wanted to feel the love from the fans. If we had only known just how long it would be until we did it again maybe we would have rushed that day. It was still a very solid win over the #23 team in the country. I am so impressed with this coaching staff. They took a team that had to feel ripped off after last week, and had them so prepared to win this game. Some teams would have just given up after losing the first three games of the season by eight points. This team decided to take bad luck out of the equation and put up a game that could’t come down to one or two plays. It was a big game in every sense of the word. This coaching staff is ready to do great things here at Purdue. If you are a team on the future schedules you had better get the wins in while you think you can.

Trying Out The 600mm Lens For Football

At one point during the pregame ceremony I realized that I had really not gotten used to my new lens yet. That extra 200mm really makes it something that you have to get used to. Early on in the game I was not as fast to the receivers as I normally am. After you use your equipment for a while though you start to get used to it. You can almost see the shots that your lenses will give you before you put them on the camera. As the game went on I was getting more and more used to the extra length. By the end of the game I thought that I had it down. I am not perfect with it by any means, but I am good enough with it for now. I need to keep shooting with it to get to where I need to be. That is probably the case with all of my lenses though.

David Blough Has An Off Game

Right? I mean he only threw for nearly 300 yards on Saturday. Obviously that 600 number that he put up against Missouri is the one we should always be expecting. If you came here from a message board I just thought that I would make you feel at home. David Blough had another solid game behind the center for Purdue. I think that this is now a one quarterback system. The leader of the team looks to be the quarterback going forward right now. That is an important thing. Going into a rough environment in Nebraska next weekend will be a challenge. I think that they have the right guy leading them into that battle.

Is it just me or are you getting tired of watching Rondale Moore race past everyone? I mean he already showed us his hands, toughness, and blazing speed during the first three games. What else can he show us? This young man is already a highlight film as a true freshman. He is the type of game changer that keeps you in your lens. Just before the second half I saw a guy who looked just like Guy Fieri on the sideline. My wife loves Guy so I was going to take a selfie with him to tease her. The kick was just about to happen though, and with Moore waiting for it I knew that I had better have my head in my lens. The game could change at any time. The picture above is a great example. He goes from being tackled for a short play to racing down the sidelines in just the blink of an eye. Normally I talk about how I can’t wait for the freshman to get to where they are playing good. Here I can’t wait to see how he could get any better.

Homecoming In Every Aspect

This past weekend was of course homecoming. It is the time that alumni come back to the place where they grew up. Of course I never did grow up so I just come back because it is where I went to school. Ever since I have been on the field homecoming has felt different. I am a bit disassociated with the events. I am aware of them, but in a very cold way. This year I let some of that guard down to enjoy a bit of the homecoming weekend. I did a few of the first down chants in my head along with the crowd. I think the reason that this homecoming was important to me is the fact that I am home again. I am shooting for Purdue.  That really made this one a great homecoming. I haven’t felt this good at a homecoming game since I moved back to Indiana from Iowa. 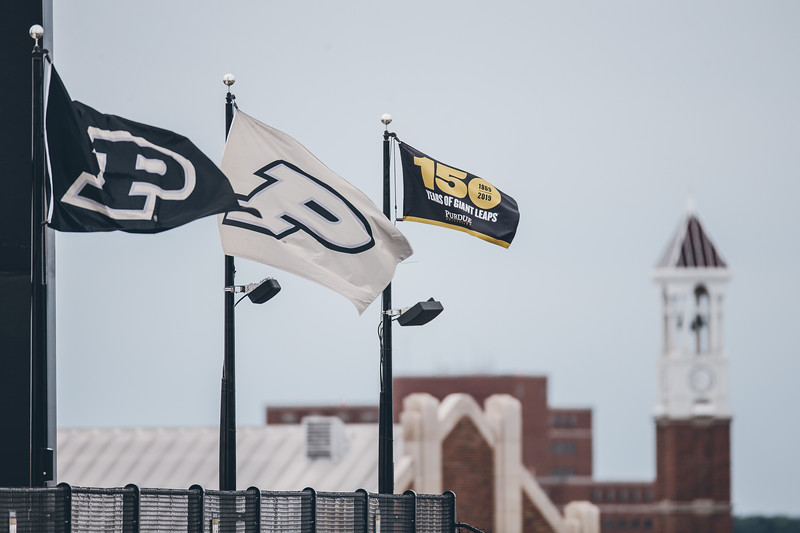 Last week I talked about coming up with a theme for the game. It is not something that I am married to, but it is a loose narrative that I want my photo story to flow through. I of course picked homecoming this week. I thought the returning players and everyone around the football gameday would be a good way to go. I quickly realized that the alumni band was not present. The former cheerleaders were not down on the field. I needed to think of something else quick. That is when I talked to the head of the photo department for Purdue Athletics about the kickoff of the 150th anniversary of the school. Before the game I made a couple of photos of the flags flying over the stadium, but that logo was my new theme. I tried to weave that in whenever I could. It is a good way to get my head away from the action every now and then and looking around for other things. 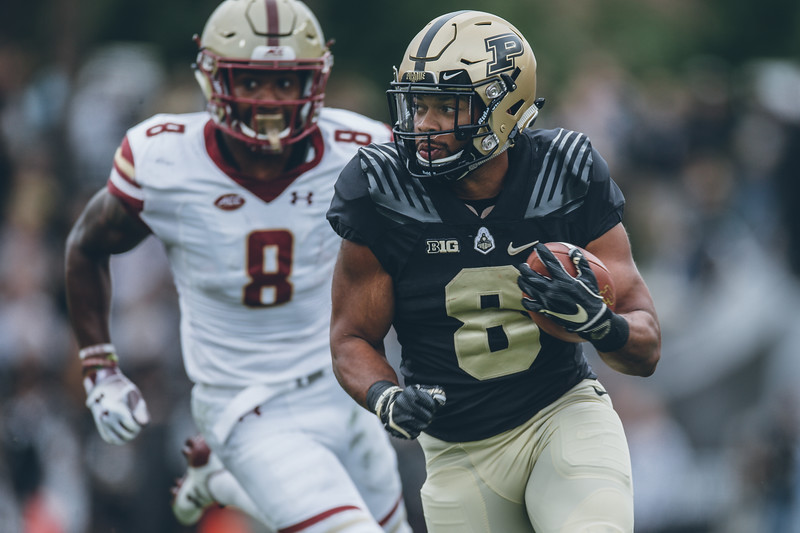 Last week I had a busy weekend making images. Most of this gallery is full of images from that weekend. During the week I made a few here and there, but not with the speed at which I made them on the weekend. If you come to the week in photos for my little hummingbird photos this may be the last one until spring with my friend in them. We will see who comes to my feeder in the spring. For now though you can enjoy some hummingbird, football, softball, and volleyball photos from last week by clicking here. Of course the story ends with photos from my daughter’s 5th birthday on Sunday. 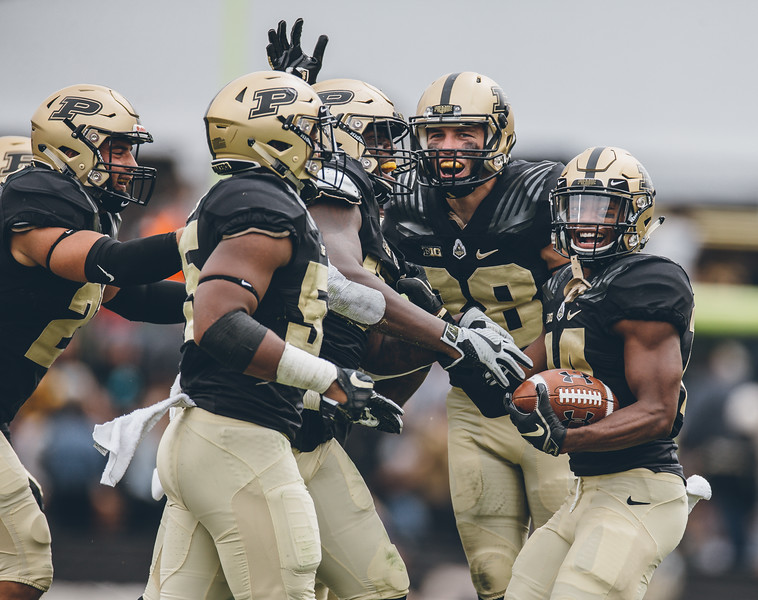 This wraps up four straight weeks working with the Purdue creative team on gameday. This has been a great four weeks. This is a team that I would put up against any other school. When they asked me to join them it was a no-brainer. This has been about a month of sappy posts so I won’t go into any more of that. I will say that these first four weeks working with this photo team has been really great. It is fun making the photos. Being back home at Purdue doing it is a huge bonus. Another thing that I love is seeing the photos when the photo story comes out. You can learn a lot by looking at the same game that you shot from another perspective. You may have thought that you had the angle on a play, but then you see a shot that is much better. I see a lot of that when I look through these weekly football galleries. You can see our gallery with victory pictures here. Give it a look. It is well worth your time.