A Clash Between The #8 and #16 Teams In The Country

Friday night the Purdue volleyball team knew that they would be tested when Illinois came to town. Illinois is a very good team, and it would take a great effort to beat them. Purdue gave that effort, but a few points here and there led to their loss. It was still a great atmosphere to watch some great volleyball. I think that this Purdue team can do great things this season. As this teams gets better so will the opponents. They have a grind ahead of them in the Big Ten, but I think that they are up to the challenge. This will be a fun season to watch unfold.

Holloway Gymnasium is one of those places that is just fun to shoot in. When it is packed with a rowdy crowd it is even more fun. It is harder to shoot as spaces to move to are limited, but the emotion that you can capture more than makes up for that. I have a few more volleyball games on the schedule this fall, and I hope that this place is packed for every one of them. 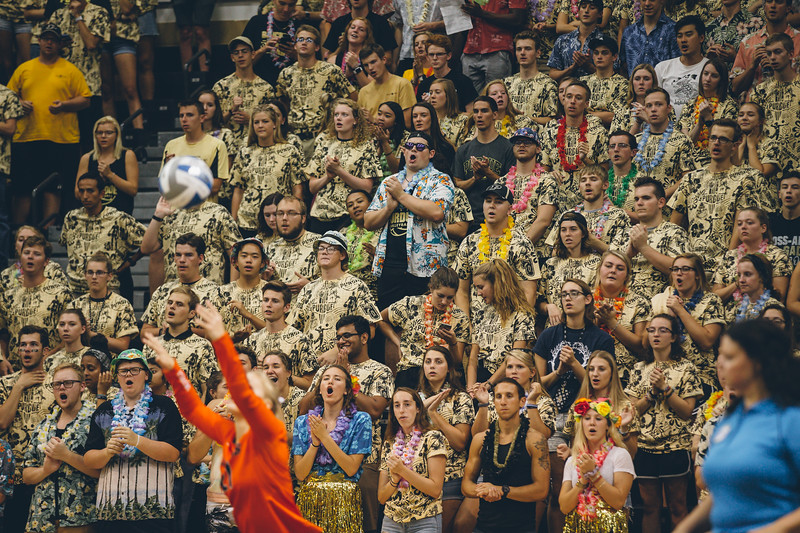 I love shooting games with a theme. I try and come up with some sort of theme before a shoot. Sometimes I can stick to that theme, but other times I move away from it as the story changes. On luau night the theme was pretty easy. You have to capture a lot of that in your photos. The Boiler Block really brought it with their outfits so of course they were easy targets to make some photos from.

Let It Be Part II

Paul McCartney never wrote a sequel to his song ‘Let It Be’. If he did maybe they could have used it Friday night in Holloway. With a call that was initially in Purdue’s favor being reviewed the song came over the speakers. During the football game it truly was a magical moment as the crowd sang along with their phones out. Here it was recreated again. I love the idea of this, and I loved that this call stood.

Are you ready for it? I will say the same thing that I say every week. Last week I had a great time making photos. There I said it. I really love what I do, and I hope that it shows up in my work. You can see my favorite photos from last week here on my Exposure page.