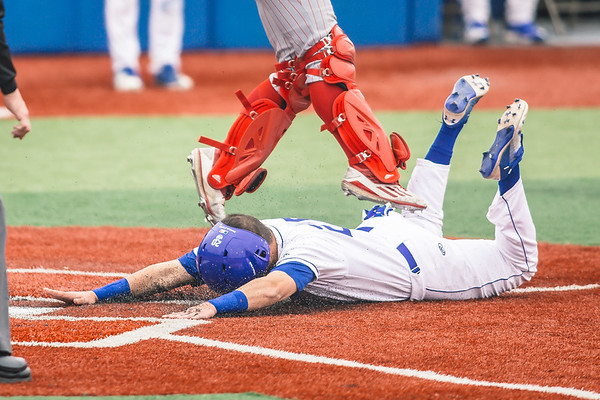 This year I will photograph the Indiana baseball team a few times. As of right now never for the team, but I have a few times where my teams will play them. Right now they are the #11 team in the country so they will have a target on their back each time that I shoot against them. This was a game that either team could win. The 5-3 score does not tell just how many times that ISU threatened, but could not get the big hit. Baseball is a funny game. During their nine game winning streak the big hit just seemed inevitable. Last night it was just not meant to be.

During the winter the only time that I break out my 400mm lens is for wildlife. With the edition of the 150-600mm lens I didn’t even get it out much this past winter. Last night I used it for the first time in game action since Purdue won the Old Oaken Bucket. I have been having fun playing around with the Tamron 150-600mm lens, but I really wanted the beautiful bokeh that the 400mm lens gives me. I still had the 150-600 with me, but after seeing the bokeh I really did not use it much. I like the extra reach of the 600mm end of that Tamron, but the bokeh and fast focusing is too much to pass up most of the time. I have a plan to still carry the Tamron for occasional shots, but the 400 is probably here to stay when I am on the clock.

I have used Black Rapid straps for a while now. I just like the way that they allow me a little more freedom than just having the strap that comes with the camera on my shoulder. I started with the single strap, and then invested in a double strap when I saw the photographer and graphic designer at Purdue with it a few years ago. I have been looking for a way to carry two cameras with me without having to always have two to balance it out if you know what I mean. The new breathe hybrid strap allows me to do just that. In the old days when I had my two camera strap and I took one off it would not sit well on my body. Last night when I took off the 150-600mm lens it did not even matter. Just having an unbalanced load on each side did not matter last night. It was the first time out with the strap, but it really seemed to work well for me. If the weather cooperates I should have some more time this weekend to really see how well that strap works for me. From what I have seen so far it works well.

If you read this blog then you know that my parents moved out of my childhood home. Part of that move was me coming to get old stuff that I had not looked at in years. One of those things were my old baseball cards. As I was packing stuff up I couldn’t help but notice some of the cards. It is amazing just how much of my photography thought process was informed by the cards of the late 80’s and early 90’s. My insane love of multi-exposure is probably due to the early Upper Deck cards. Last night I played around with some multi-exposure a little more after looking through some old Upper Deck cards during the day. Maybe I should flip through those binders a little more.

I don’t know why, but I still haven’t felt like I have put together a solid game yet this baseball season. Maybe I have been looking at too many cards and expecting too much out of myself. I am now a few games into the season so rust should not be an excuse. I have made some fine images, but overall I am not happy with my gallery. Part of the reason may be that my home park really does not allow for much low shooting. Most of my positions are raised. That works well for some stuff, but not everything. Over the course of the next couple of weeks I will get to branch out a bit and shoot in some other parks where I can get that low angle. That angle really helps when trying to get down into the action.