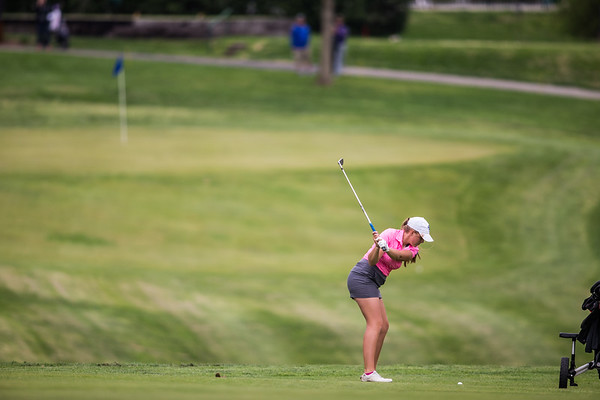 Yesterday I was back at Indiana State, but for something entirely new there. I photographed the final day of the 2017 Indiana State Invitational. The experience was like all of mine at ISU, and that was good. They were crazy enough to give me a golf cart so I spent the day trying to find good backgrounds and or holes that could give me a good background. All of the planning the world can go down the drain when a shot is hit to the wrong side of the fairway. At the end of the day Indiana State took home the team award after having a monster day. It was the second lowest team score in school history.

I really have only photographed golf one other time prior to this, and that was just for fun. Last year I was not too sure how it could go so I shot a round at Purdue just to get the hang of it. With that in my hip pocket I drove down to Terre Haute with no worries. I do not watch golf, but back when I had a good back I played the sport. It was nice getting back out on the links for a while on what turned out to be a beautiful day. The day started out with some pretty boring photos, but as I got what I needed I could relax and have a little more fun. A winning day by the team I was covering helped make the photos a little better. Smiles are always a good thing.

Getting the Sand Trap Shot

One of my goals on the day was to make a good sand trap shot. That sounds like an easy task, but when you consider that I was covering eight golfers on a 18 hole course it is not so simple. Luckily for me one of my golfers went into the sand in a place where I could easily move right in line with her and the pin. When it is lucky for me it is not so lucky for the golfer. It was late in the day, and I knew that this was probably my one shot at what I was going for. I was already in position when the golfers approached the green so that I would be moving in the background. When she made the shot it was a good one out of the sand, and I was able to get a photo that I had in mind on the drive down to ISU.

If you know me in person then you know that I usually have on a hat, and most of the time I have a beard. Knowing that the summer months were approaching and the sun would start to give me a tan I shaved my beard early this year. No more shaving only to have a white skin beard for this guy! It is funny to sit back and watch all of the people who didn’t recognize me after the transformation. I couldn’t fathom how that was possible. It is still me. I saw a little bit of that yesterday. I spent quite a bit of time with the golf team photographing and then editing their photos yesterday. Just a short time after the event I was making pictures of them at the SAMY’S (more on that later) and at first I didn’t even recognize it. The hats were off, and the hair was down. It was amazing how different they all looked. I had a quick lesson in just how much a person can change very quickly.

Last week I was finally able to get some more baseball under my belt. I did not photograph as much as I thought I would as it seemed like everything that could go wrong and prevent me from seeing Purdue vs. IU did go wrong. Thankfully I was only going to shoot those games for fun so it was all good in the end. You can view my Exposure gallery of my favorite images from last week here.