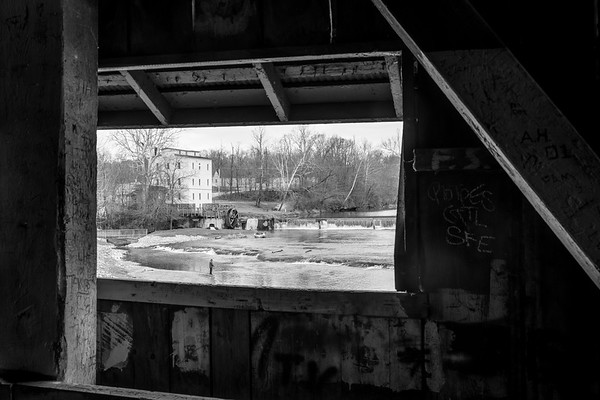 On my way south to Indiana State to cover their senior night I saw a sign for a covered bridge and an old mill. What photographer would not pull off the road for that? I made a shot of the mill with my quadcopter that you can find here, and then I went about exploring the bridge a little. With all of the signage and other nonsense out in front of both entrances to the bridge it did not really work as a photo for me. I want to see a covered bridge looking like it was just a bridge. This one looked like a place to hang signs from that would also let you cross the stream below. I also made a few shots of it from the side with my quadcopter, but being the dead of winter I was not too thrilled with those either. I decided to cross the bridge to see what was on the other side, and that is when I noticed the shot above. As I was packing up to leave from my quadcopter shoot this gentleman showed up to fish. As I was crossing the bridge I saw a scene that looked like it belonged on a wall. It was then that I had the idea to frame the photo that way. I wanted to show just the right amount of the inside of the bridge, but also have the scene outside the bridge be large enough to see clearly. It was something that came to me at the time, and I really like how it turned out.

I have been promoting my weekly look back at my photos a lot this week, and that is because I really like some of the photos in there. You can find that post here. This was a fun week for me, and I enjoyed putting the post together. This week is kind of a wild card. It could be an epic week, or it could fall flat. By the time that this post will be live most of that equation will already have been answered. As I sit here typing this I hope that things are already going great, and I have had an amazing week so far.