A couple of nights ago I was in Mackey Arena one last time to see Purdue take on the Indiana Hoosiers. I really should have been getting ready to head to St. Louis for Arch Madness, but the game was too big to miss. I have seen a lot of good basketball played by Purdue. In 2006 a young Purdue squad defeated a ranked Michigan squad. I saw them beat Wisconsin in 2008 with the fans storming the court. The 2009-2010 season was full of great games and moments. Seeing the team beat a very good Ohio State team at OSU was a big highlight. The games in Spokane were amazing, and they led me to follow the team to Houston as well. Gameday coming to Purdue for a game against Michigan State is another moment that stands out. The loudest that I could remember Mackey as a fan was during the New Year’s Day game against West Virginia. These were all great moments for me as a Purdue fan. Last night tops them all. Seeing Purdue win the Big Ten title on their home floor was amazing. It has been a long time coming, and I am very grateful that I was able to see it up close. 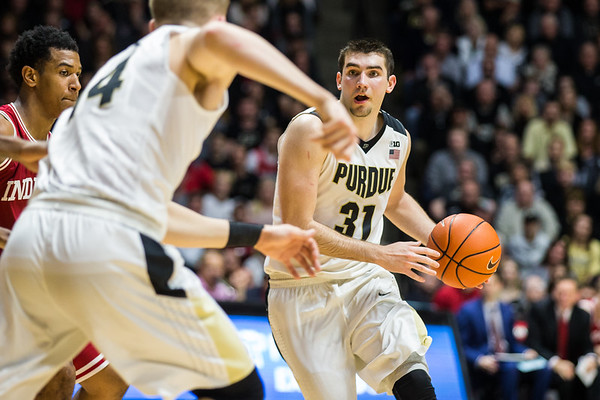 Believe it or not the Boilers had to play the game against Indiana before the party could start. I did not really cover the game as I normally would. I tried some things here and there, but for the most part I was saving my shots for after the game. With no outlet for my game action images it really serves no purpose. I did make some shots of Biggie Swanigan though as I have not been able to watch him as much as I would have liked this year.  He is a special player that I was glad to be able to see play up close and personal. At a game like this though the action is secondary.

As I said above I was not at the game in any official capacity. With that in mind when the trophy was presented I did not fight for a spot to get a photo. Most of those people are there doing a job, and I should not be taking a spot from them. I went up high with an idea that did not really pan out. Large poles and tall photographers ruined what I had in mind. I still made something usable, but nothing too great. When the craziness died down I went back down to the court to try and find some individual moments. Most of the photographers had left to file so I felt like I could have some fun with the moment. Times like this are when I realize just how charmed of a life I lead.

Cutting Down the Nets

From past experiences shooting this ceremony I realized where I had to be. I wanted to be up in the stands near the parents of the players. There was a large ladder set up in the way though so I quickly changed plans and moved over a bit. When the players turned to their families I would have my shot. For some reason not one player looked over to that section. They were very business like cutting down the nets. I guess they expect to do it a couple of more times this season. This angle that I chose still tells a story, but also gets me out of the way of the working professionals again.

Caleb Swanigan has been tearing up the league this year. Tuesday night he pulled down a late rebound for his 24th double double of the season. He has been a force that has helped propel this team to where it is now. He was a focus for me that night, and I wanted to get a shot like this of him where he stood alone. He has made sure that he stands alone in the Purdue record book so I wanted to show that in a photo. This was one of my favorites from the night. He has been a great player, and it will be interesting to see if he can bring home the national player of the year award. If he doesn’t get the conference award something is very, very wrong with that process.

The Antics of Tom Crean

The best thing that ever happened to Purdue basketball was the hiring of Tom Crean at Indiana. He has the unique ability to get the least out of his teams. Along the way he makes hilarious faces and gestures. He is a true double threat. I probably could spend the entire game making images of Tom, but once I made the image above I decided I was done. He is really fun to photograph, and I hope that he signs a long extension to stay at Indiana.

The Uncertainty of It All

This path to being on the floor was an interesting one for me. In 2013 I was just happy to have a one game credential for the exhibition game against Indianapolis. One of my photos from that game ended up on the front page of the Purdue Sports website. From there I was given a few more one game passes until finally they gave me a season pass. Every year since then when I apply for the pass I expect to be turned down. Every year they give me one. I always try and shoot the last game like it is my last. I was out of town for the women’s senior day so I had to miss that. I was going to do everything that I could to be at this senior day. If my last photo from the floor of Mackey is this one of Vincent Edwards walking off the floor with the Big Ten trophy I can’t be too upset about that. This has been a fun ride, and although I hope it doesn’t end I am glad that I was able to witness this team up close. Most of the season I have had to watch them from afar. With the tournaments coming up that will again be the case. There is something about seeing a team up close though that really pulls you into them. I hope that this team can accomplish what we all know that they can. A Buzz Around Mackey

When I pulled up to Mackey Arena it was just about thirty minutes until gametime. I watched the girls dance at their dance class, and then made my way as fast as I could to Mackey. When I got out of my car there was a buzz in the air. As I walked alongside Ross Ade Stadium towards Mackey I decided to run up the steps a bit to try a photo. I wanted to show some of the people walking around Mackey. The even light provided a nice backdrop for the photo. I made my photo, and then went inside. When I came out the buzz was replaced by my ears ringing. That is always a good thing, and shows just how loud this arena always can get.

How Can You Top This?

Tuesday night was so much fun that it will be hard to top this week. As this posts I will be headed to St. Louis to cover the Indiana State men as they try to win the MVC Tournament there. Last year was a great experience that really jump started a fun ride with them. I have already been to some great spots with the various teams, and this coming athletic year will be great as well. The highlight of 2017 will probably be my trip to Neyland Stadium with the football team. ISU has not had the season that was envisioned after the upset of Butler, but they have a tournament draw that can lead to some great photos. The opportunity is there to make some noise and change the outcome of the tournament. I don’t know when I will blog about the games. I kind of like this idea of waiting a bit to take my time. It has worked well the last couple of days, and it lets me think instead of rushing to get a post out.