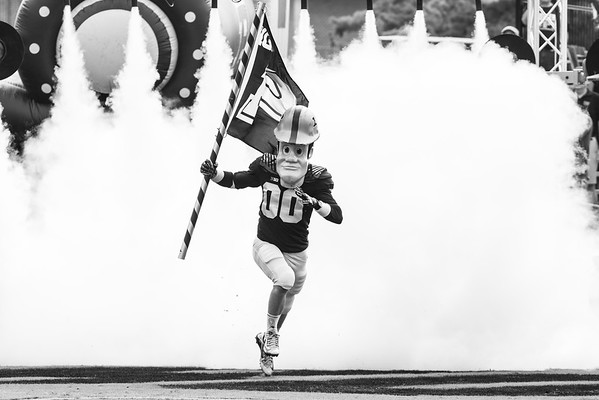 Purdue Finishes Their Non-Conference Schedule With A Win Over Nevada

Yesterday was a good day on the campus of Purdue. My day started off with the Boilermaker football game against Nevada. This was the first Boiler football game that I was able to attend this year due to a couple of other commitments. I was very excited to get out and see the guys play. I may have been too excited as I was there way too early shooting anything that I could. It is hard to believe, but 20 years ago I bought my first season tickets to Purdue football. At the time they were not doing so well, but that would change quickly. This is the fourth season that I have been lucky enough to be down on the field making images of the team. I am not shooting for a wire service, and the school has so many good people shooting football that they don’t need my photos. That means that I am just there shooting for myself. As long as I can I would love to continue doing this. It is even more fun on days like yesterday.

Things did not start off so good for the Boilers. Some ball security issues led to them being down eleven with just over a minute left in the first half. They scored on a great pitch and catch from Blough to Marshall to go into the locker room with a little momentum. They took better care of the ball in the second half, and the defense came to play. They held the Wolfpack rushing game down which the ‘experts’ said that they couldn’t do. That combined with a nice balanced attack helped the Boilers finish off the win. You learn a lot about a team when they are down. Can they come back? Yesterday the Boilers never gave up, and they finished the game yesterday. Now they face a tough road test in Maryland next week. The next time that I will be photographing the Boilers will be in Champaign in two weeks. It will be nice to be able to walk into the stadium with my gear instead of sneaking it in as I have had to do in the past.

Yesterday I ran a three camera system for the game. I had my Canon 1DX mounted on my Canon 400mm lens. I shot most of the game with this combo. When the action was a little closer to me I switched over to my Canon 7D Mark II and my Canon 70-200mm lens. That allowed me to have a little flexibility near the goalline. As always I had a grab camera ready to go in case something surprised me close. For the first time I had my new Canon 5D Mark IV with my favorite lens the 24-105mm on it. If you watch me during a game I probably look like rain man as I keep checking to see if I have my focus right on that camera. That all paid off though when Blough threw his deep ball to Marshall yesterday. I was on Blough with my 400mm lens as he let go of the ball. I quickly picked up my grab camera in time to get the shot above of Marshall hauling in the pass. It is one of my favorite shots on the day, and shows off a little of Ross Ade Stadium and the nice crowd that was there yesterday. I have only shot two college games so far this year, but that grab camera has really come in handy both times.

One of the many highlights of the game yesterday was the way that Shaun Phillips led Shout! I have seen some great versions of the opening. Neil Armstrong leading Shout! just prior to a huge Purdue comeback was one of them. Dave Shondell led an amazingly spirited version that will always top the fire up versions. For pure fun though Shaun Phillips has to win. He sang, danced, and cheered his way through the song. Every time that I thought that he had topped himself he did it again. He was fun to watch, and it looked like he had a blast coming back to Purdue. I think that he should do this every week.

I have put together some of my favorite photos from the game into a gallery here on my Exposure page. I normally try not to post an Exposure page right after the game because I like to let the Purdue Athletics page go up. I had some extra time before volleyball though, and I had such a great time shooting the game that I put one together yesterday. I may do so again for the homecoming game as I plan on putting a photo story together of all that goes with homecoming. As long as I am plugging Exposure pages you can see my gallery of images from the Purdue volleyball win over Indiana here as well. The game was for the Monon Spike, and it was played in Mackey Arena. It had been a while since I have been in Mackey, and it was great to be back in there. A huge crowd made for a good time as well.