My Favorite Sports Photos Of 2022

This was a year of change. I had to find new places to make photos. At the end of the day I lucked out and found a couple of great places that likes what I do. Change is always hard, but sometimes it is necessary. I will admit that for a decent portion of the year my confidence was off a bit. By the end of the year though I realized that I am still learning and getting better. That is the point of this whole thing after all. Here are some of my favorite sports photos from this past year.

My first event of the this year was the Indiana State swim meet at Purdue. The time of day was perfect because a little light came through an open window and into the pool. I made me feel like a west coast photographer for a while getting to use natural light for swim photos. These moments never last long as the window is usually quickly shut, but it was nice to get to use the light for a little while.

This photo sort of kicked off my year for basketball. I was trying to figure out what was next. A chance to help out Indiana when they came to town sort of got me going. It led to another job fairly quickly for me. It was just the kick that I needed at the time.

This year I got the chance to photograph the Big Ten swimming and diving championships for Minnesota. It was great to have a way in to the meet, and I made this photo early on in the action. It was simple, but it was great to get a photo I liked in right away.

Before the Purdue baseball team ever took the field I made this photo of them during a indoor practice. The light was bad, but I just wanted to see any kind of baseball. 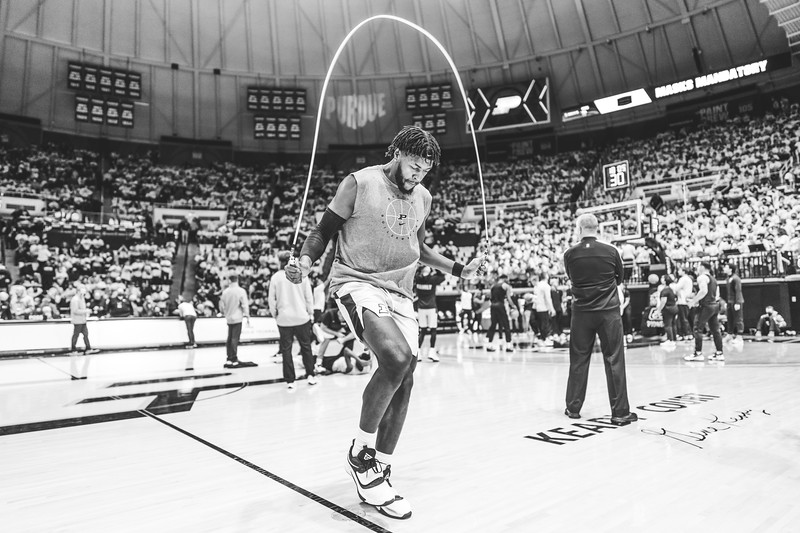 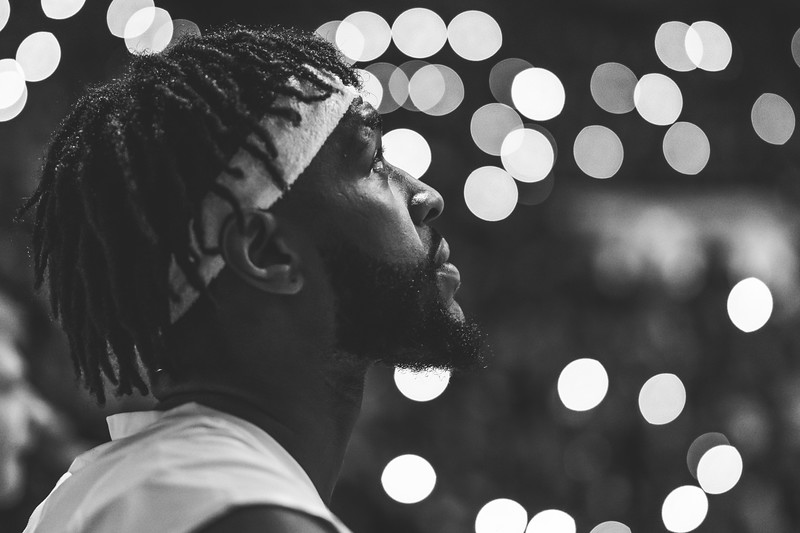 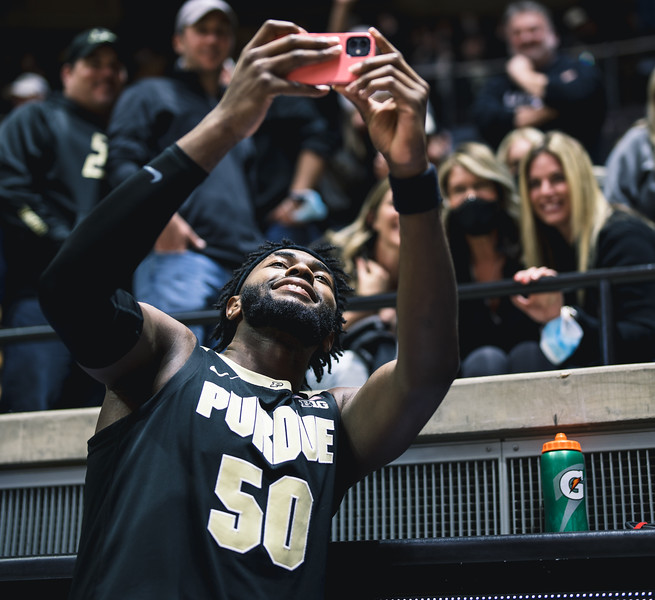 Trevion Williams just made good photos. It didn’t matter what he did. He just made a good image. Even something as simple as him jumping rope looked good. Here are a few favorite Trevion photos.

It is funny how things work sometimes. I started making photos of Tyler Powers when he was in the Colt World Series. I was able to keep making photos of him for years as he was a member of the Purdue baseball team. Here is one last photo of Tyler.

At some point I feel like I repeat myself a lot on these year end lists. This was a very fun Purdue baseball team to cover. I don’t know what credentials will look like for me in the future, but it was fun seeing them last season. I think that this photo shows that hustle and enthusiasm in one frame. 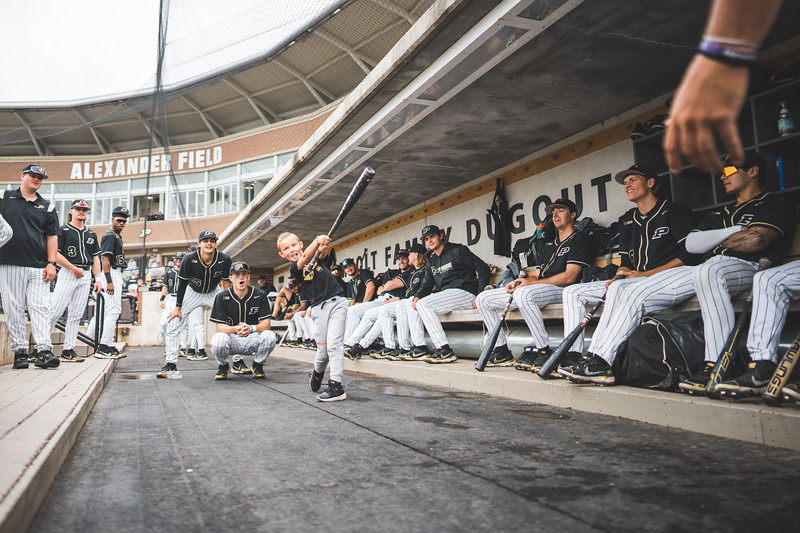 I made this photo during the last home game for the Purdue baseball team. It was senior day, and at the time I felt like a senior as well. If this was the last time that I was in the dugout I wanted to make it count. This was the last photo that I made in there, and it was one of my favorites of the year. This young man asked to help with the tarp, and ended up being the star of the show. He has put some work in on that swing as well.

This spring I found the Harrison softball team as they were playing the last two weeks of their season. The good news for me is that those two weeks led to the state title game. Here are a couple of favorite photos from that run. The emotion and joy was so much fun to capture. 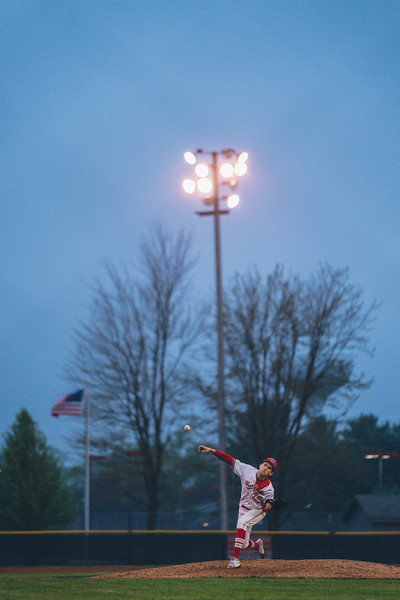 This year I had a very fun year making high school baseball photos. I saw two no-hitters in my own neighborhood along with a lot of good baseball. Here are a few favorites from this past season. 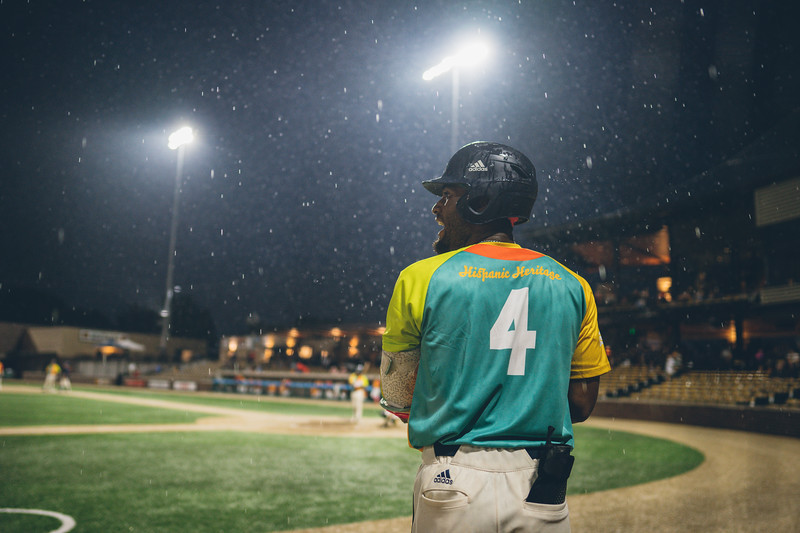 I really look forward to spending summer nights with the Lafayette Aviators. They are fun to watch and photograph. Here are a couple of my favorites from this past season. There are far too many to put here so you can click here to see my favorite Aviator photos from 2022.

It is always cool when you find an athlete that gets the creative side. Corey Adams is better behind the camera than he is in front of it. He is pretty good in front of it though. He threw one of the two no-hitters that I saw this year. Here are a couple of images from this past year. The top image is of his last home game as a Red Devil, and the bottom image was made during a start for the West Virginia Miners of the Prospect League. He is now a creative at Indiana University. We won’t hold his school choice against him though. 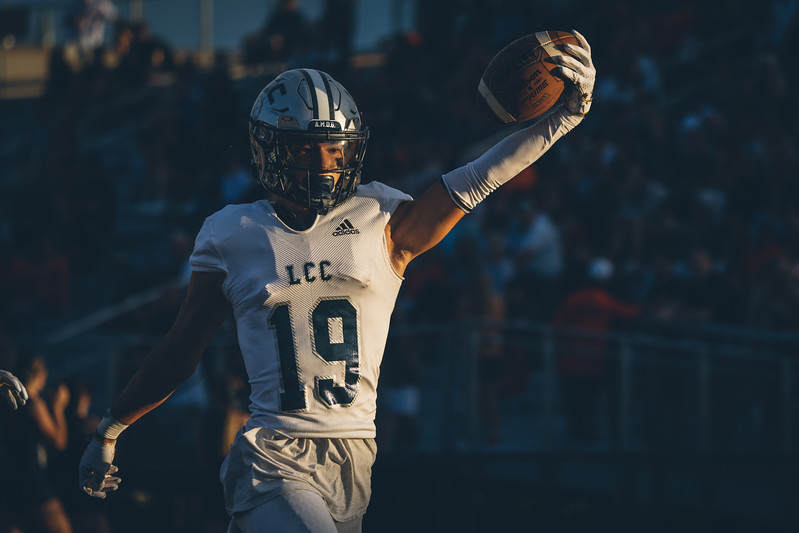 Early in the high school football season you get some great light. Here during the last moments of that great light I lucked into a touchdown with a little celebration as the player crossed the goal line. 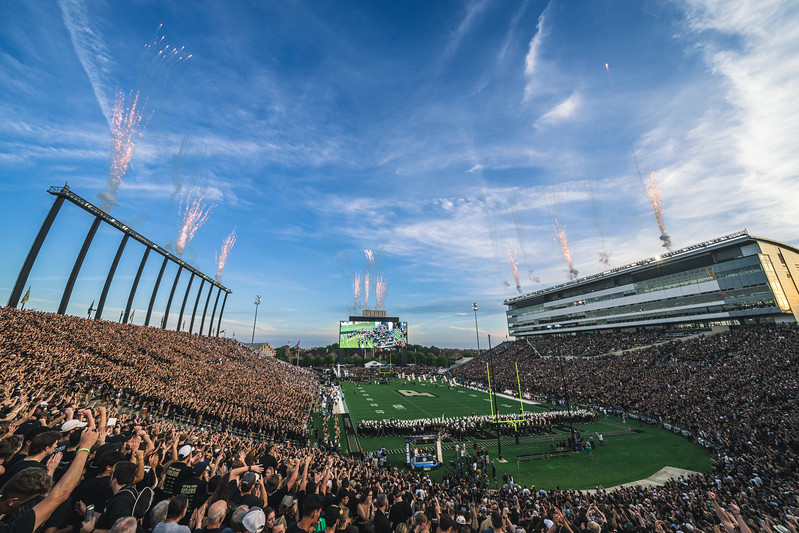 I made a gamble and bought a ticket to the home opener for Purdue football. The last time that I bought a ticket to get into Ross Ade Stadium I made a photo that changed everything for me. I was hoping for lightning to strike twice. I did sell some prints of this image, and it more than paid for the ticket. This photo is for sale for a little longer. You can buy it buy clicking on the image which will take you right to my sales page.

This year I had some fun making different images of the Harrison football runout. Here are a couple of my favorites. 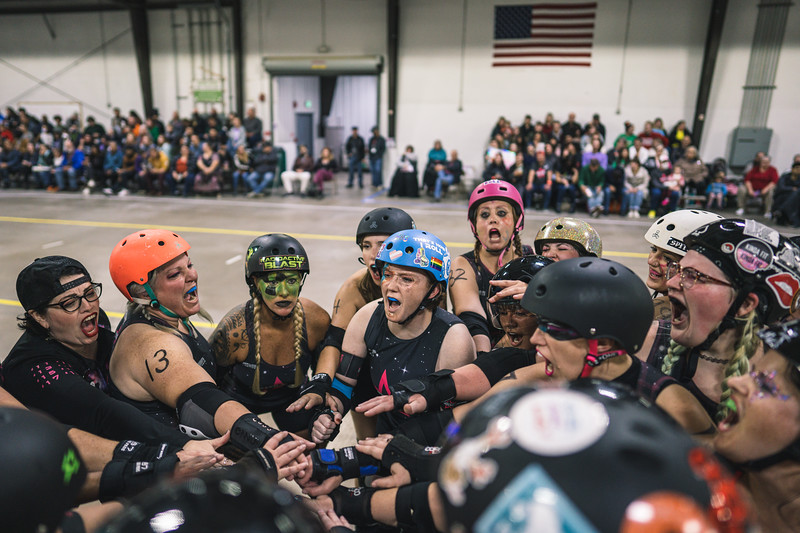 This year I finally got to get back to roller derby. It had been years since my last game because of the pandemic. This Lafayette team was the first team that believed in me. It was great to get out and photograph them again.

This was a photo that I wanted to make for a while. I always made images for Purdue though so I never got the chance to make it. When Indiana State came to town I could finally do it. This photo won the FCS photo of the week. It was a great confidence boost for me. 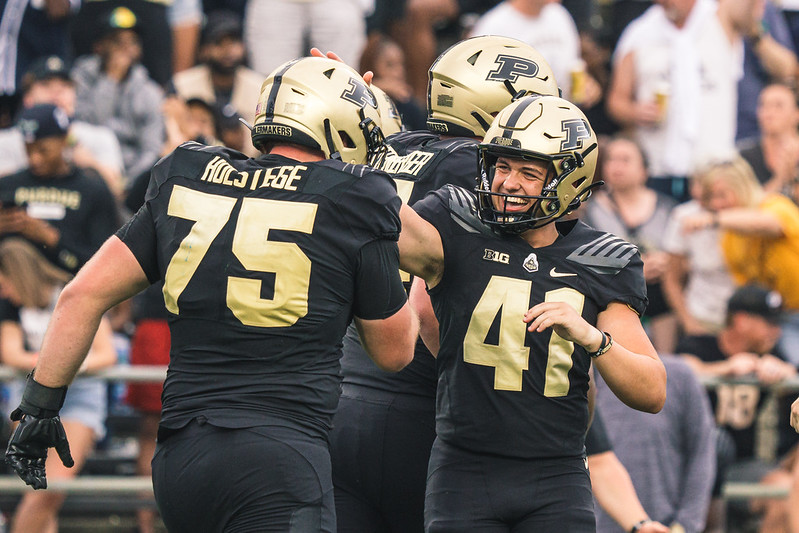 Being at the Indiana State game allowed me to capture a cool moment. I have watched Caleb Krockover play football since his days at West Side. I have photographed on the sidelines with his father for the same amount of time. To see the joy in Caleb’s face as he knocked in his first collegiate points was amazing to witness. I was glad that this happened at a game that I was on the sidelines for.

High school soccer means that you have some access to make the photos that you want in great light. You still need the play to come your way, but sometimes you get it. Here are a couple of my favorite photos in the great light this year.

Having some fun making some different photos this year during fall ball. The Purdue softball team plays so few home games every year that it makes those fall ball games seem that much more important if you want to see the team. 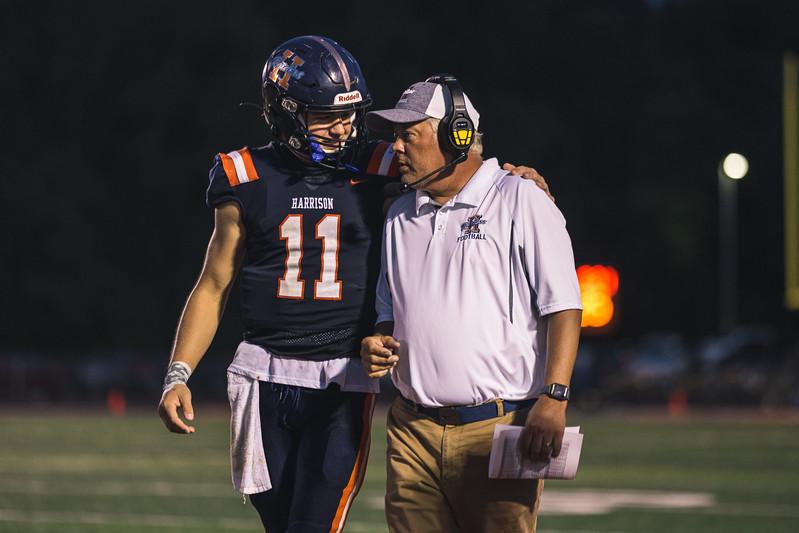 I love these little moments during a game. They don’t last for long, but you can make them last longer by capturing them. This is why I do what I do. I love making these moments last.

I didn’t make it to many Purdue volleyball games this year. I did make it to a few though, and there really is nothing like Holloway when it is packed and loud. Here was a moment just before things were going to get loud.

With the quickly setting during pregame at a West Side game I was desperately looking for a subject for a photo. I had an idea that I wanted to see through. Lucky for me I found Mike. I made a couple of quick photos, and then he understood the assignment and quickly posed for me. It was a quick moment, but a fun one. Mike is that player that just finds his way onto this countdown.

Here Charlie Jones celebrates a big gain against his former team. He really had a breakout year during his only season with the Boilers.

This fall I had the chance to get back into Mackey Arena thanks to a couple of visiting teams. It is always fun to make photos in Mackey no matter what team I am making them for. 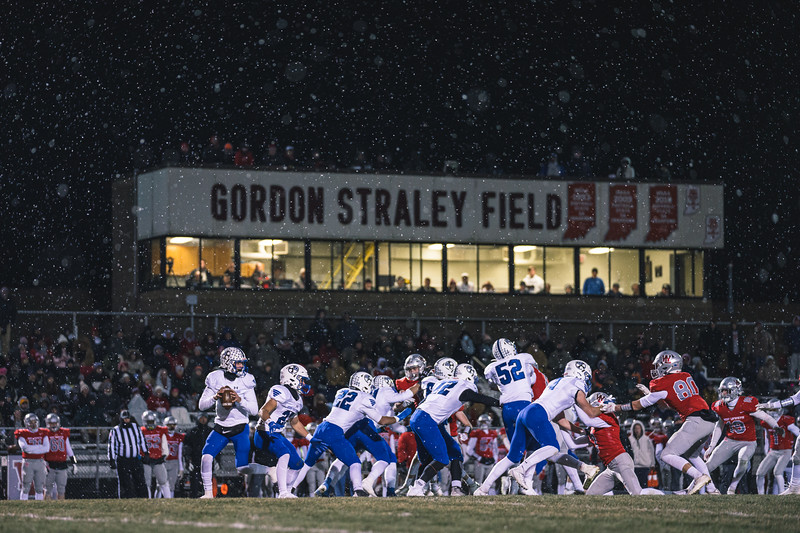 My last high school game of the year was played partially in the snow. Snow at night on a high school field is a beautiful thing. With that in mind I had no long lenses with me. I was there to capture the scene. This was my favorite photo from the night.

This was the last photo that I made at Ross Ade Stadium this year. I always treat every game like it could be my last, but this year it felt like it could be the last for a while. I hung out extra long taking it all in. Lucky for me Payne Durham was doing the same thing and I could make some photos during that time.

Harrison has a great intro for both football and basketball. The lights out and spotlight for basketball is something that I want to work this year. Much like the football intro I want to try and do something different for each game.

Here are a couple of good emotion photos from my end of the year in basketball.

As I put this together I can’t help but think that it will look very different next year. The good news is that I will never stop making sports photos.