Back At Mackey Arena

After not photographing any games at Mackey since early December I was able to get there two weekends in a row. This is always a great place to make basketball photos so I will take every opportunity that I can get to get in there.

Everything Old Is New Again

During the game it hit me how crazy this journey has been. Here I was on the sidelines photographing a guy named Collins coaching a guy named Nance. As a kid I watched Doug Collins coach my Bulls and play against Larry Nance. It is very cool to get to photograph their sons as they continue their father’s legacies.

After what happened to Purdue in Bloomington I am sure that Purdue was not too thrilled to see another kid from greater Lafayette on the Northwestern roster. I don’t think I every saw him play for Jeff, but over the last few years I heard a lot about Brooks Barnhizer. It was cool to finally get to see him play. I hope that he has a lot of success over the next few years, but maybe not so much against Purdue. 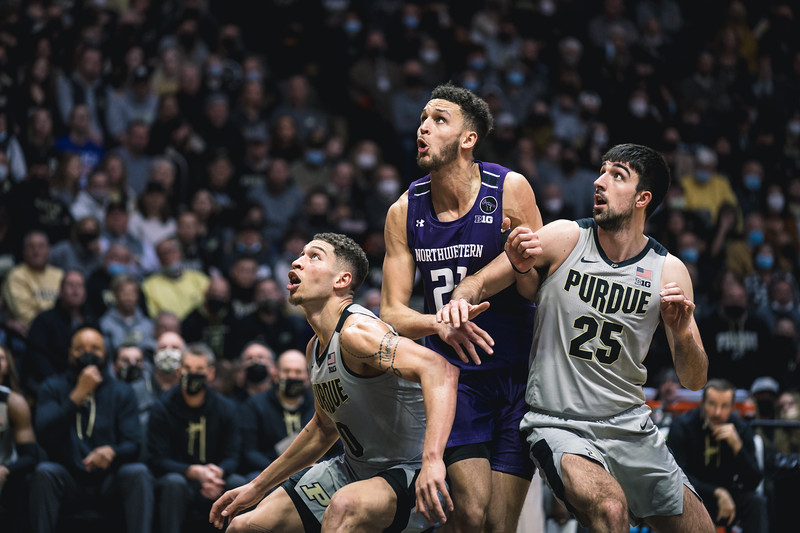 Dusting Some Things Off

I don’t photograph much basketball these days so I always feel like I am getting the dust off of myself at the beginnings of the games. I end up making some decent photos though. For this game I brought out a couple of pieces of equipment that I haven’t been using much these days. My Sony A9II was a workhorse for a short period of time, but the A1 just made it obsolete. I used it as my third camera on college football Saturdays and some of my favorite photos of the year came from it. My Sony 24-70mm lens barely gets used anymore. I have been liking the 24mm f/1.8 lens quite a bit. The 24-70 was dropped, and it results in a little blur on both sides of the frame almost like a lens baby would do. I need to get it fixed, but right now with how much sports work is coming in I think I might just sell it rather than fix it. It is a nice lens though. It just doesn’t fit into what I am making photos of right now.

More With The Flag

Yesterday I talked about using the flag during the anthem. There is a point where with it played at each event that you feel that you can start to repeat yourself a little. In fact just after this game during the wrestling match I didn’t make a photo during the anthem. I usually try and do something though. It is a chance to add to the gallery before the game starts. If you can get a couple of photos in the bag before the game then it always makes the game a little easier.

Right now I have a few weeks in a row with no sports lined up on the schedule. If you want to get in on the fun and hire me we can work something out. This is my passion and I am always looking for an excuse to get out there and make some photos.