Sunday I really was going to be content watching Purdue volleyball on TV before heading over to soccer. I knew that the combination of soccer and the trick or treating photos that I would be making later in the night would be a lot to edit. About halfway through the first set I started to pack a bag so that I could make volleyball photos. By the time the second set was winding down I was on my way to campus. I arrived early in the third set, and I was able to make some fun photos of sets three and four. 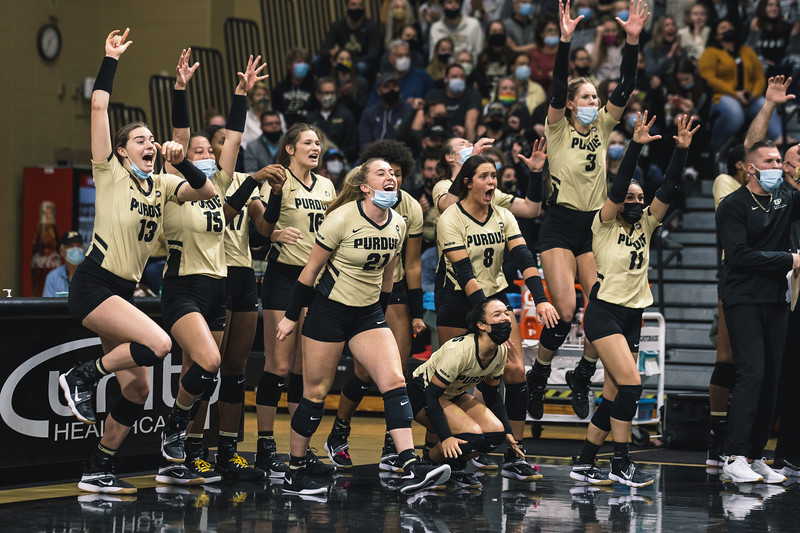 Seeing the bench erupting from the side was pretty cool. I knew that I wanted to capture this from a couple of different angles on the day. Their emotion gave me an idea for a different photo later in the day.

Seeing how into it the bench was I knew that they would erupt on match point. My only hope was that they would not jump in the way of the on court players celebrating. Things worked out very well for me here to make one of my favorite images on the day. Knowing that I was not on the clock let me gamble a bit on this photo. The gamble paid off big time I think.

I have photographed a lot of post game celebrations for the team. I was not there on assignment so I was trying some wide things out to stay out of the way. I decided to get up close and personal though for one photo when I saw Coach Shondell join in the celebration. He has never done this when I have been there before so of course I started firing away. In the span of a couple of minutes I made my two favorite volleyball photos of the year.

I have been working this photo a bit over the course of the last couple of matches. There always seems to be something out of place that I didn’t like. This is still not perfect, but that gives me something to keep working on as the season goes on.

I am glad that I went down to Holloway. It added a couple of hours to my photography on Sunday, but it was so much fun being there to watch that match in person. Here is my gallery from the final two sets of the day.