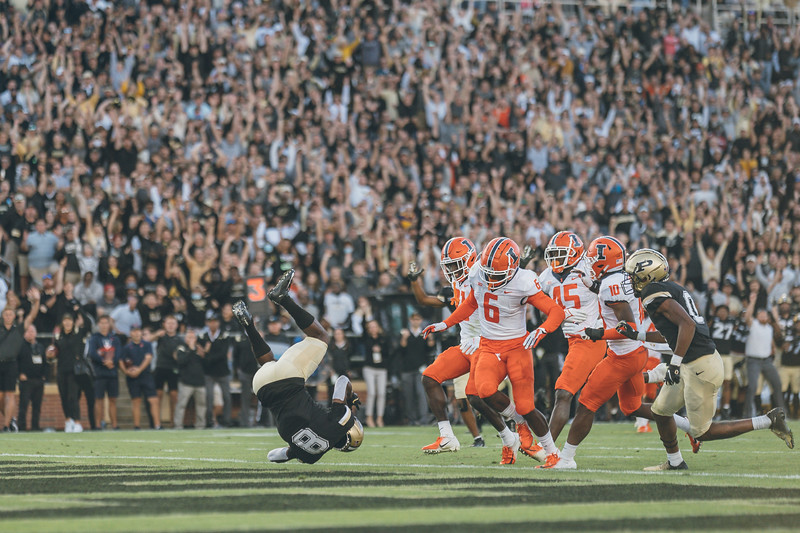 Saturday was a fun day. After a couple of weeks with no college football in town the Boilers were back home again. The 2001 Rose Bowl team was honored and Purdue had on throwbacks of that era. The stadium blew up as Purdue scored the game winning touchdown late. I was gambling a bit on the play. I switched to my 135mm lens. Anywhere from the middle of the field to me I was covered. If the play had gone long I might have been in trouble. I was lucky here though as the play went to the perfect spot on the field to get the action and the crowd reaction. Sheffield was so far ahead of the defenders that the crowd was already signaling touchdown as well. A lot of luck was on my side to make one of my favorite football photos so far this year. 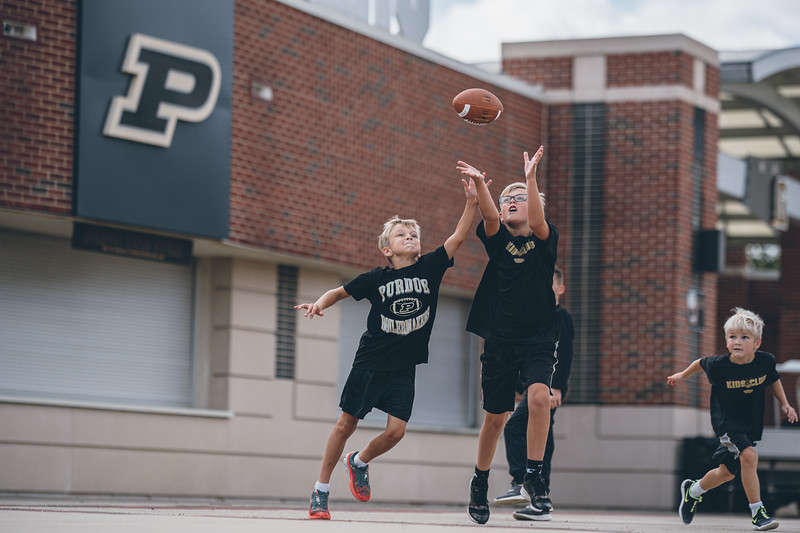 While I was waiting for the team to arrive at the stadium I was looking for photos to make. I saw these kids playing football in the shadow of the stadium and realized that this is what it is all about. Before I even went into the stadium I had made a couple of photos that I liked. That always makes things easier when you do enter the stadium. 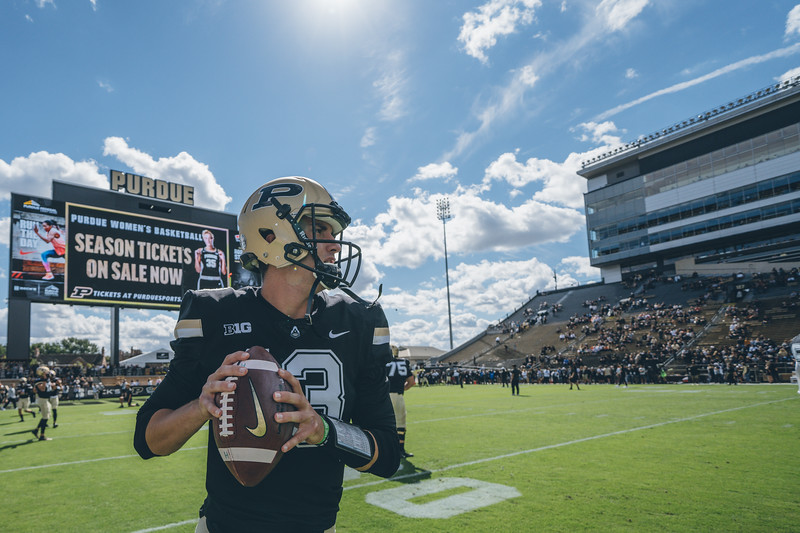 I had more fun during pregame than I have in a long time. The first home game of the year we had a lot of rain during pregame. While I like making photos in the rain it does sap some of the creativity from you. The ultra wide stuff is harder to make as the front element is easier hit by the rain. I only pulled that lens out after thinking about the photo for a while. Saturday I could just roam around and make photos. That is the best way to do things.

Saturday the team wore throwbacks from the 2000-2001 season. Last year I just wanted to be in the stadium when they wore them. This year I was lucky enough to be back down at field level to photograph these jerseys. I have a soft spot for them as that era means a lot to me. Maybe we will see them again for the 25th anniversary of the Rose Bowl game. 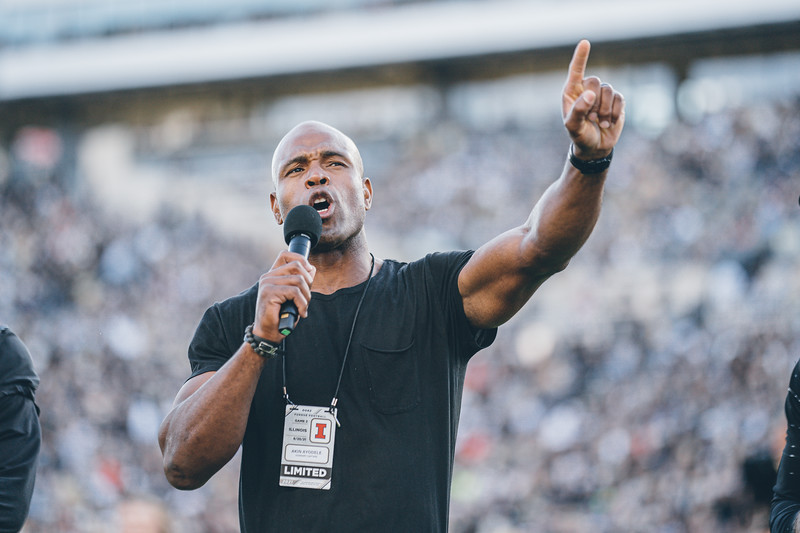 One of the cool things about Saturday was seeing some familiar faces on the sidelines. I went to school at Purdue during this time, and I was in the student section while these guys were playing. It was an amazing time to be a Purdue fan, and their energy was great to see again. It was also fun seeing how much fun they were having being back at Purdue again. This is the yearly reminder though that we need a Joe Tiller statue outside of the stadium. 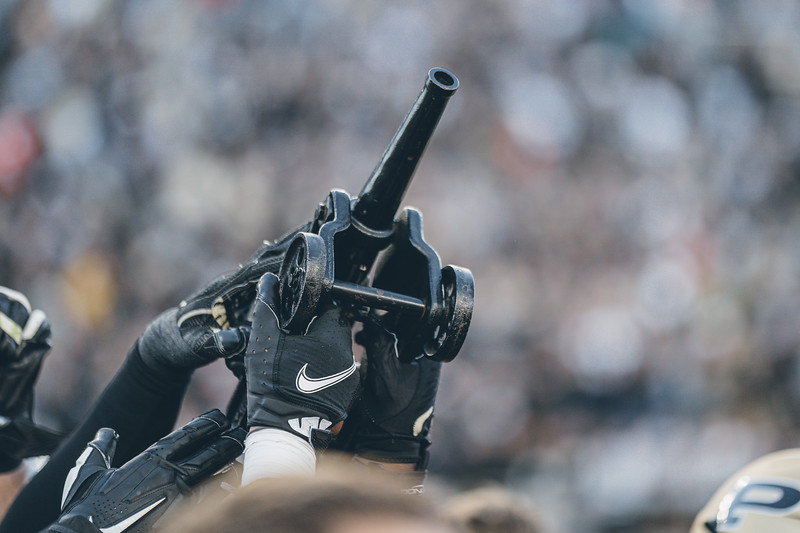 The cannon is one of the fun trophies that we play for at Purdue. As I was getting ready for the game I had a photo idea in mind for it. Instead of battling to get the wide angle photo I would make something like the photo above. Battling for the wide angle is actually much easier as every head and finger raised seemed to get in the way of me and this photo. Hopefully I will have many more chances to make this photo over the years. 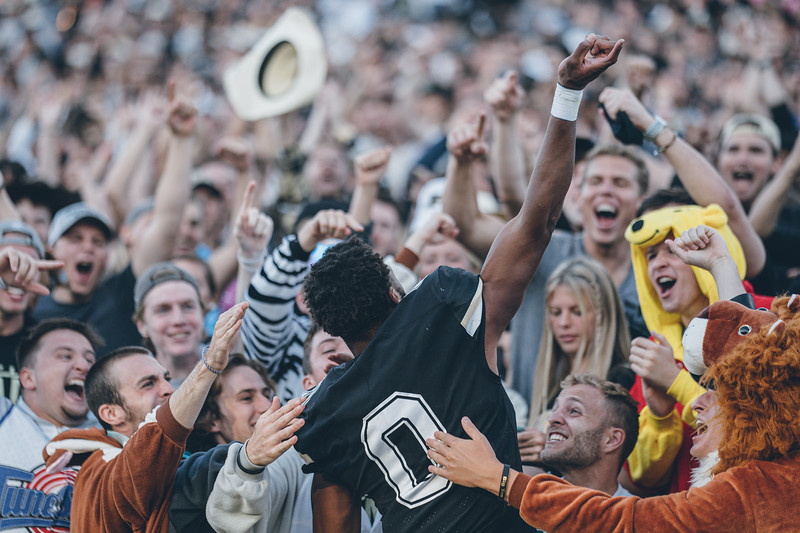 Fun With The Fans

Just as the cannon was being raised I saw this moment developing in the crowd. I knew that my cannon photo was secondary so I ran over to make this photo. This is what college football is all about. Celebrating with the fans after a big win.

Running For The Wide

One of my pregame responsibilities was to make the coin toss photo. I normally hang out by the 50 with that in mind. I had this idea for a photo during the anthem, and I thought that maybe I could do that another day. For some reason though I decided that Saturday was the day so I took off running to get up next to the students to make the photo. I quickly got back down to the field in time for the run out. Ross Ade was looking pretty good so I am glad that I made the run. 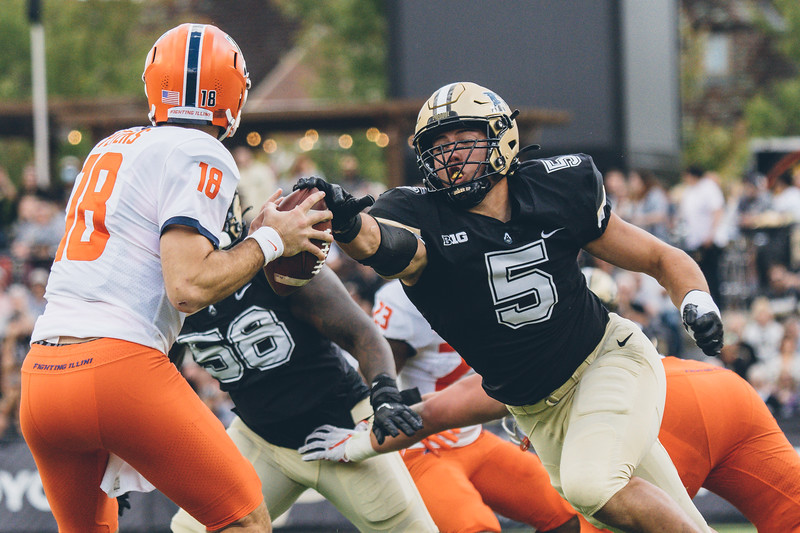 Early in the game I made this photo of George stripping the quarterback of the ball. George is really fun to watch play the game. He just is built differently. When he saw that ball come up he got his hand there so quickly. Illinois recovered the fumble, but it forced them to punt and gave Purdue good field position for their second score.

This has been a long post. Can you tell that I had a blast on Saturday? Here is one more photo from the game.