A quick sweep in the middle match of a tournament is always a good thing. You can rest some players and get yourself ready for the final game.

During this match freshman Raven Colvin had the 2nd highest hitting percentage in team history. It was her first ever start, and she showed why she was given it. She was 9-10 on the night, and looked very good doing it. As much as I am excited for this season you can see the signs that this team will be good for some time to come.

Jena Otec and Purdue started off the second set very well scoring the first 14 points. It was an impressive start to the set, and it allowed some new faces to enter the game. If you have been to Holloway in the past few years then you know the chant the crowd gives Jena as she serves. It was pretty fun hearing that over and over to start the second set.

Friday night Purdue had about the easiest win that you can have at the Stacey Clark Classic. They cruised through the sets fairly easily. That is great for everyone working, but it can make the gallery seem a little short at times. Not as many points scored means less chances for photos. I was pretty lucky on the day though, and the gallery did not seem very short. 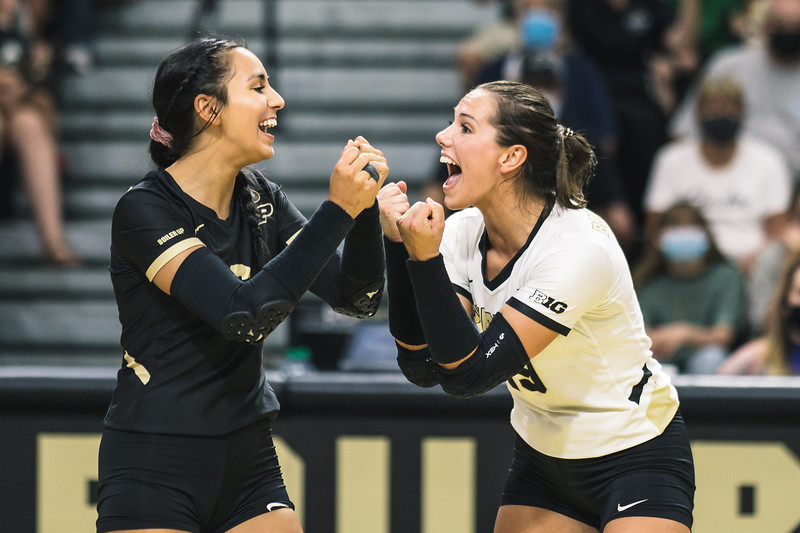 I love these types of matches because you get to see some new faces enter the game. When that happens I tend to focus on those players quite a bit. It is always good to have some fresh faces in the gallery. This match gave me plenty of opportunities for that.

During this period in time masks are a part of everyday life. They are what allows people to be in the stands right now so I tried to pull back a bit a few times to show that masked up crowd. It adds an element into the photo that clues you in on the time period right away.