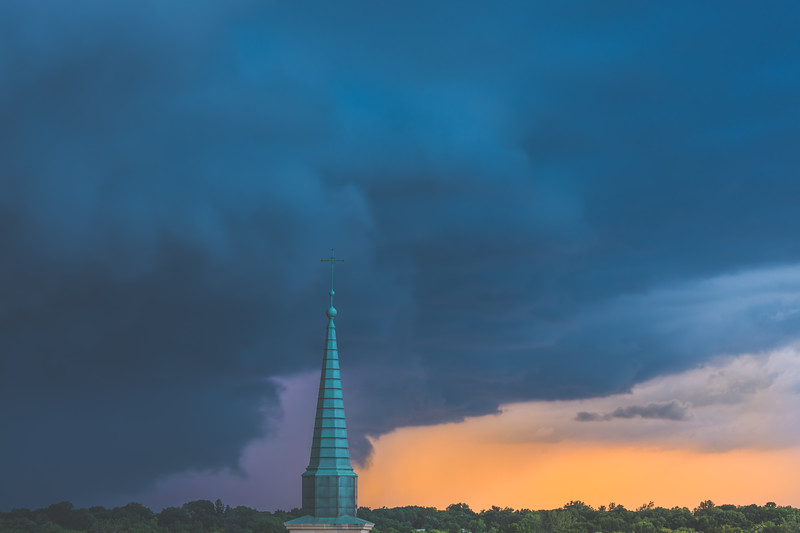 When Everything Comes Together

Saturday night I was back on the roof near the Purdue Union to photograph the storm coming in. My goal was to get a lightning strike near the Purdue clock tower. That never happened. There was one that would have worked, but of course it happened when I was changing settings. Just before the storm hit though the fast moving clouds were racing towards the old church across the street. The colors in the sky were amazing so I quickly moved my setup to capture this scene. It was amazing to watch nature in action as the dark storm clouds raced in to erase the sunset glow in the sky. This old church has been in this spot since 1939. It has had two owners in the last few years though, and with Purdue owning it now I would guess that it will not be around much longer. I am glad that I was able to make another photo of it though as it has always been a great photo subject for me. It will soon probably be replaced with another boring building built so high that it blocks my view to the north. For now though we have this great storm photo with the steeple in it.

Two weeks prior to this photo I was on the same roof making photos with my little one. She did not come with me this time. On the previous visit the storm had passed and there was little danger. Here I was on the roof with the storm coming right at me. It was a little more sketchy so I was just up there alone. I use this roof a little too much, but it has a great view and I feel that it is often the best option. As this summer goes on I will probably use it even more to try and get that lightning strike photo. I barely made it into my car before the skies opened up on this night. The light was so cool though that I tried to stay out as long as I could. When the first rain is an insane downpour though you have to get the gear into the car.

One Reply to “The Magic Of Sunset Storms”