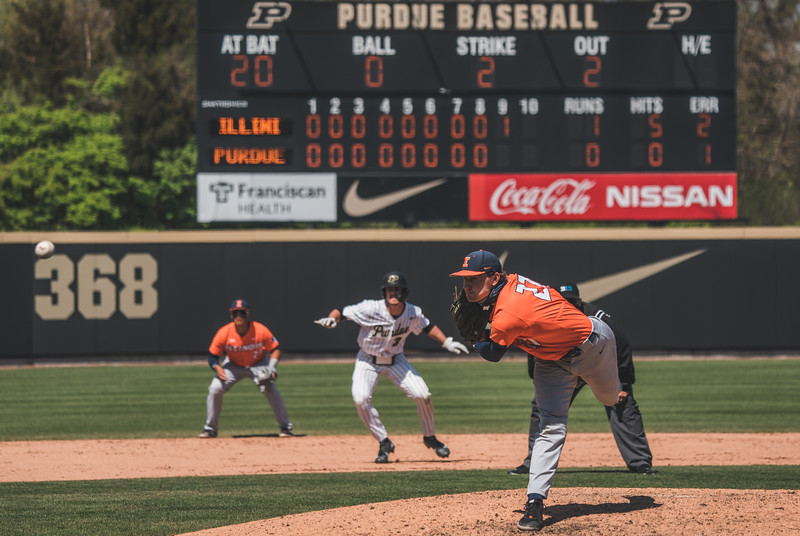 The story of this game was the no-hitter. Illinois used three pitchers to combine for the gem. I really did want to see the no-hitter. I had an idea though in about the sixth inning that Purdue could still win and I could see the no-hitter. Illinois was pretty wild, and Purdue had some chances to score without getting a hit. As a kid I watched Andy Hawkins no-hit my White Sox, but the Sox still won the game. I will talk about it more later, but in the bottom of the 8th inning I thought Purdue had scored the run to do just that.

Have A Day Cory Brooks!

Lost in the no-hitter talk was the day that Cory Brooks had. He went longer than any Purdue starter this year, and put Purdue in the position that they still had a shot even if they hadn’t had a hit yet. He went out there and did his thing Sunday afternoon and he was fun to watch.

The Play At The Plate

In the bottom of the 8th inning with Mike Bolton on third Miles Simington struck out. The ball hit the dirt so it had to be thrown down to first to complete the out. As the ball was thrown to first Bolton took off from third. I thought that he had it easily, but a great throw from first made it very close. The throw was so good in fact that all that was needed was to put the tag on. Here you can see just how close it was. It would have been amazing to have scored that run. The momentum immediately turned to Illinois who knew that they needed a run to have a shot at the no-hitter.

The Speed Of Mike Bolton

In the fall of 2019 I had a lot of fun watching Mike Bolton run during fall ball. I couldn’t wait until the spring to see him do it in the games. Of course that was put on hold, but we have Mike now running the bases again. As a kid I heard stories about the go-go White Sox teams. In 2005 I was able to watch Scott Podsednik tear up the base paths in the first half of the season. When Mike gets on base it really reminds me of that 2005 season. Everyone in the park knows that Mike is running. He still gets there. They cannot throw him out. His speed brings a lot of excitement to the park.

Here is a link to my full gallery from Sunday’s game. The outcomes of the games were not what I had hoped for, but after last year I will take any baseball that I can get. You did have a little history with the no-hitter as well. This season is rapidly coming to an end. There are only seven home games left, and I know for sure that I cannot make one of them. That means only six more chances to see this team play. They can play a very exciting brand of baseball. Hopefully the weather and everything else works out so that I get those last six chances to see them play.

One Reply to “Purdue Baseball vs. Illinois Game Three”