Every walk around the bog has to start with a stop by Ruby to say hi. It was a little early when I arrived, but Ruby was out enjoying the sun on her. I made a quick photo of her sunning and then moved on.

Down By The Water

When I walked down to the water I had plans on hanging out at the point. I wanted to steal the spot from a local photographer. There was already a crowd there though so I moved down just a bit to have a little room to myself. The waterfowl were all a little far away for my taste. I hung out though just seeing what all was there and coming up with a plan. A pair of red-tailed hawks started flying around and one of them gave me a look over as it looked for food. I love it when birds become curious about me. It usually results in a good photo.

While we were watching the hawks a group of sandhill cranes flew overhead. They are on the trip north, and they decided to give us a little show as they flew over the bog. I really need to head up to see these guys this year.

I have seen a lot of brown creepers over the years. I swear that they are always in the shadows though. Even on my tree at home they hang out in the shadows. When I saw this one it was a little far away, but then flew closer to me. I remember thinking that I wish it would hang out on this recently fallen tree in the light. It actually did! It resulted in what is probably my best creeper photos to date. 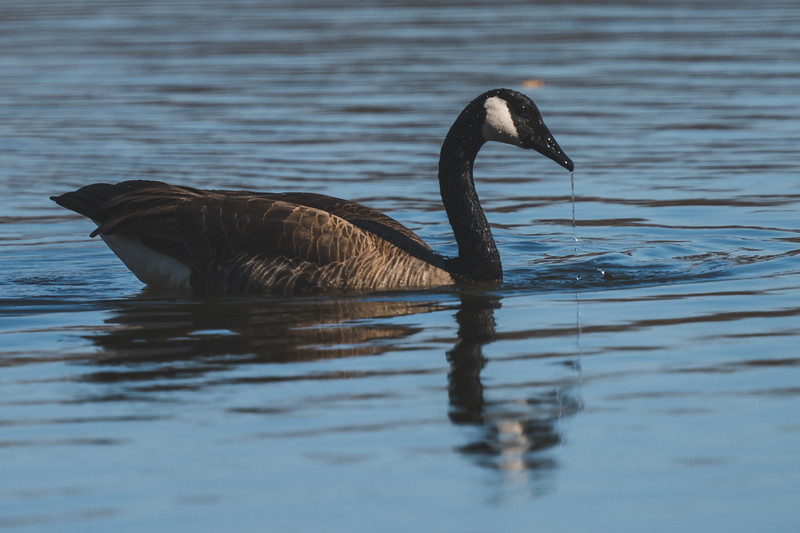 This Canada goose must actually be from Canada as it was very polite to me. It could have swam away as most birds do, but it gave me a nice close pass. It even gave me a couple of chances at some action. The Canadians are always so nice.

The reason that I was on the north deck for so long to make the goose photo was that I was letting this bufflehead get closer to me. I picked a spot and was very still patiently waiting for it to make its way closer and closer. It is a slow way to spend your time, but when it works it is always worth it. Of course as it was just starting to get within range a couple showed up with camera talking very loudly. As the birds all swam away quickly they asked themselves why the birds were leaving? I wonder why. My patience did not pay off this time so I moved on to another spot.

Moving was the right idea. I walked to the back pond and almost immediately saw this bald eagle fly over me. It made some amazing passes before settling in a tree. After about five minutes it took off again and that is when I made the photo above. I have seen these birds a lot now, but it still never gets old. It never did find a meal when I was watching, but a bald eagle in flight is always an amazing sight.

While the eagle was circling higher and higher this ring-billed gulled came flying by very quickly. I only had one shot at the bird, but I was able to capture it.

Back To The Point

I walked back up to the point without much luck seeing anything. I knew that as the sun was going down that this would be the action spot. I was focused on some ring-necked ducks that show up in the background of this photo, but this mallard decided he wanted to be on the blog. Why not? I hope the he likes and shares this post when he sees it.

I really went out to the bog to photograph herons yesterday. I saw a beautiful heron photo on Instagram a few days before and I knew that it was time to start photographing these birds again. I only saw one on the day, but it put on a show. Some of the local herons have started hunting from the air. Watching them hover over the water as they look for fish is quite amazing. This one ended up with a huge goldfish, but it never gave us a good view of it with its catch. That photo will have to be for another day.

This pair of mallards came through in some great light giving us a good opportunity to make photos of them. I am usually in the camp that birds need to be in groups of three or another odd number for a good photo, but when it is a pair it can work too.

This is where my lack of waterfowl knowledge starts to kick in. I knew that this duck looked different than normal so I made photos of it. I had no idea why though. Apparently this is a mallard and domestic duck hybrid. That white bib on the front is what sets it apart. I will have to keep my eye out for this bird as I explore over the next couple of weeks. I saw it on the Wabash earlier in the year so maybe it is sticking around for a while.

The two very nice geese that I saw at the other end of the bog decided to take flight. They were so nice that they flew super close to use. So close in fact that they were too close! They don’t know about minimum focus distance though so I appreciated the gesture.

Early in my walk as I was watching the hawks and cranes a muskrat swam right up to me at the waters edge with some dinner in its mouth. My photo was not the best though as it was obscured by some of the grass at the waters edge. Just before I was going to leave it came up on this log to give us a slightly better look.

The whole time that I hung out at the point a group of ring-necked ducks were just out of range for a good photo. Suddenly they took flight and flew past us. I didn’t have to wonder for long why they flew as we saw a man emerge from the grasses on the other side of the water.

It was time to leave for the night so that I could get home and make dinner. On my way back to the car I walked by Ruby and said goodnight. Of course she was still asleep so she probably didn’t hear me. It was a good walk and I saw much more than I ever expected to see when I started off. I love it when a good walk also turns into a good photo session.