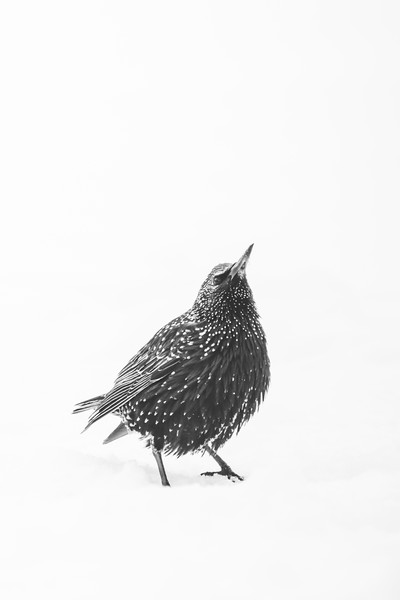 This is a bird that it seems like every bird enthusiast has an opinion on. From what I have seen when I post a photo most hate the bird. There are a few select people though that enjoy the starling. They are an interesting bird for sure. When they show up at the feeder you know that you will be refilling it soon. The are a different bird though. They look different than most birds that I see from day to day. On a cloudy day they are this amazing black bird that for some reason I always put into black and white. On a sunny day suddenly colors pop off of the bird. They are worth a little extra food for the photos that they give me.

This really is an invasive species. In 1890 a Shakespeare enthusiast wanted to bring some of Shakespeares birds to America so he released 60 starlings in Central Park. He had the hope that those sixty would breed. When you see that there are now more than 200 million of them in the states you can guess that they did. They are not well liked and have never had any protections placed on them. In fact about 1.5 million of them are killed by the government every year. When I look at my feeders and see that the house sparrow and the starlings have taken over on any particular day I can thank Williams Shakespeare for that.