One of my favorite places to hang out is the Celery Bog. I always enjoyed my morning walks out there nearly by myself. This year though I lost that free time when I used to walk. I still logged quite a few miles out there, and hopefully this year I can log some more in. Here are my twenty favorite photos from my walks this past year.

20. Part of the great thing about the mirrorless camera is the flip out screen. That allowed me to put the camera nearly on the ground to make this photo of the frog. As you can see while it was eating it was being eaten as well.

19. This horned grebe was part of a fun walk out at the bog with my little one. I think she thought that it was too funny that her dad was laying down on his belly to make photos of what she thought was an ugly bird. The color from a local store in the water adds to the photo. 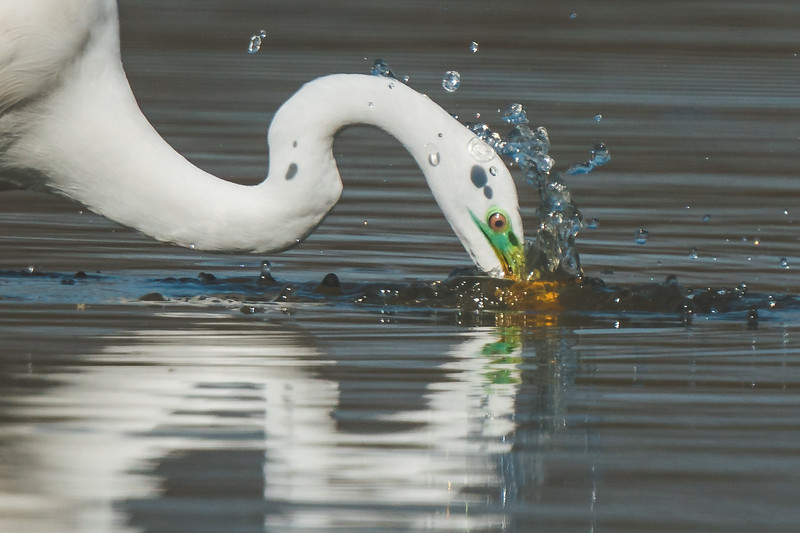 18. This great egret was on the back pond fishing very close to me. I used to have a cool downed tree as a chair that allowed me a full view of the pond. Of course when people started coming out to the bog that downed tree ended up thrown into the water. This was still a good place photograph from though.

17. These two tree swallows seemed to wonder why their new home was of such interest to me. Of course it was the fact that they were there that made it interesting. 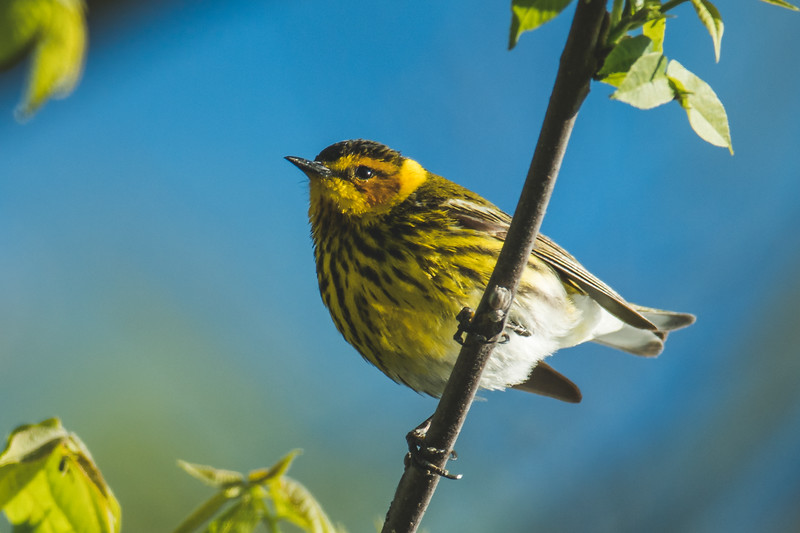 16. For some reason I missed this cape may warbler photo when compiling my best of warblers countdown. The colors are great here so I don’t know why I missed it. 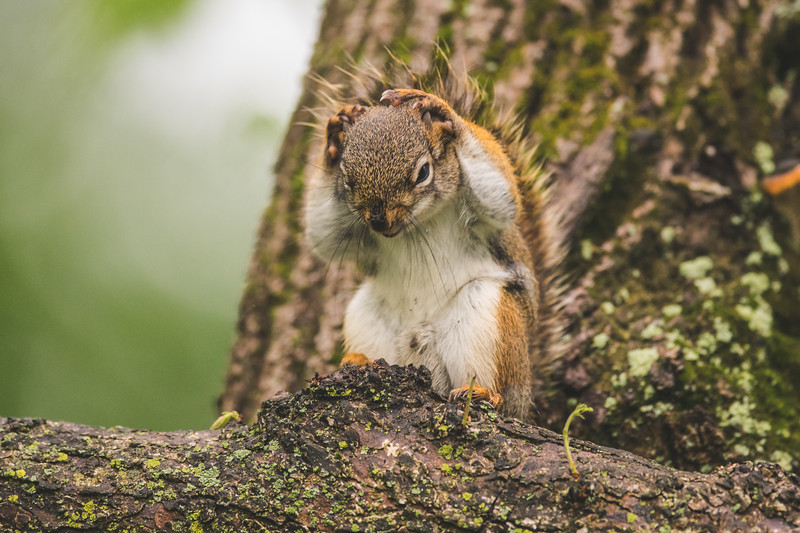 15. Sometimes you have to wonder if you are annoying the wildlife. This photo proves that maybe I am from time to time. I was talking to this squirrel about my problems and then it started doing this. I guess it was done hearing my story. 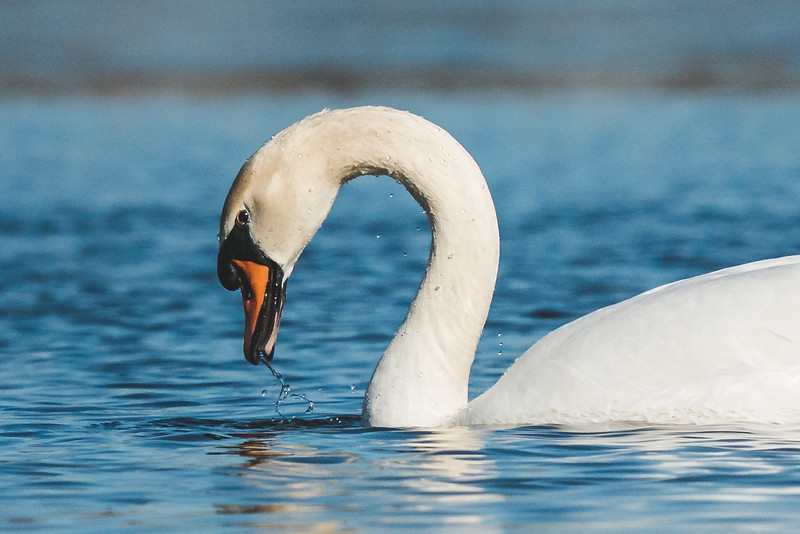 14. This photo is special for a couple of reasons. One is that I love how these birds look against the blue water. The second is that it was the second to last day that I saw this bird alive. There used to be five mute swans at the bog. Then one winter it was down to one. Shortly after this I photographed the bird curled up on the ice and then later that day it tried to fly away and was hit by a vehicle. I know that they are invasive, but they are fun to photograph. Hopefully another one makes the bog its home this year. 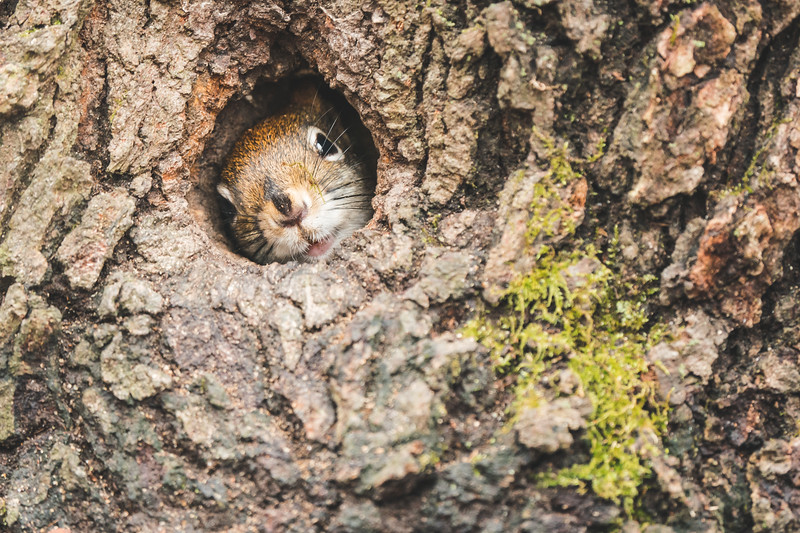 13. This photo is why you don’t hold information from other photographers. I have tried to be as upfront as I could be with people who ask what I have seen. I say that because I don’t always know what I have seen. Sometimes I find out when I get hoe and I can study the photo better. Here a photographer that I trade tips with told me about this hole. When I walked back through the woods I looked at the hole and sure enough there were two eyes looking back at me. I would never have known about this spot unless he told me.

12. This scarlet tanager was fun to follow and photograph. I kept waiting for a good perch, and then I was lucky enough to get this one. I was not birding much at the time so it was a fun find for me. 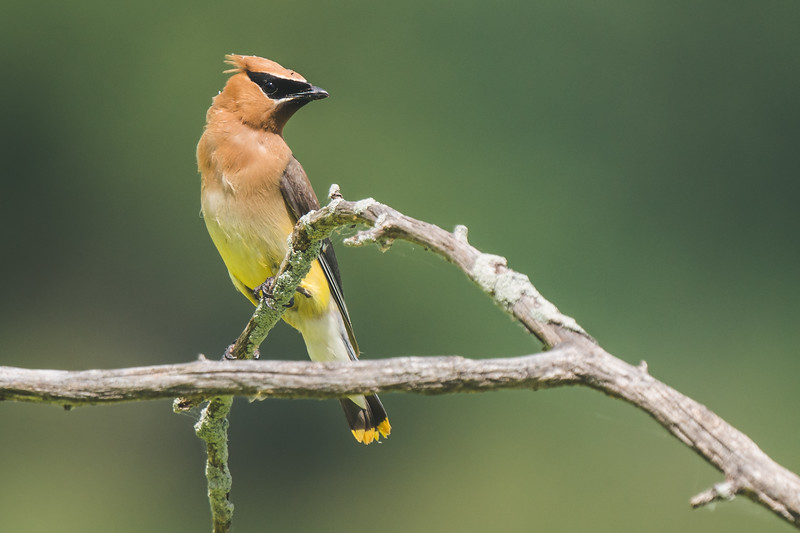 11. This  cedar waxwing flew onto a branch right in front of me and posed one day. I couldn’t believe my luck. Normally I see them against a gray sky or something like that. To have one land down low with a great background was a treat. 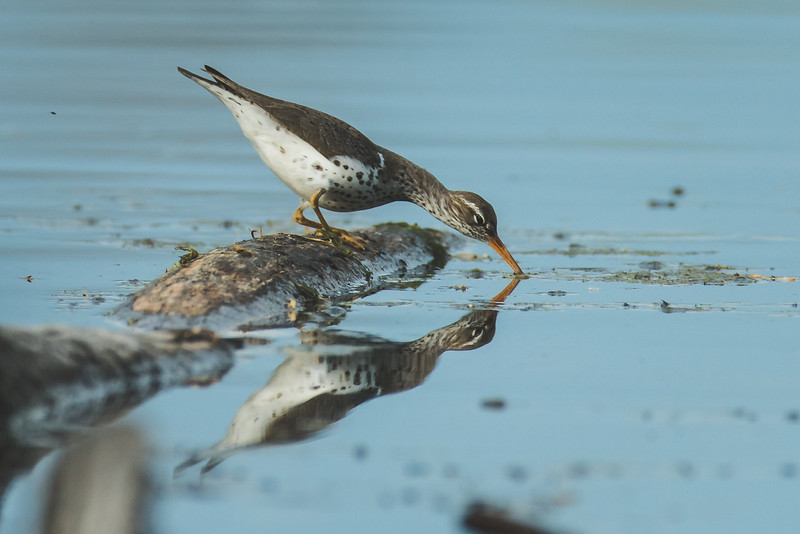 10. I had some luck this year making reflection photos of the spotted sandpiper. They end up like this often so you just need a place to get low and being okay with getting dirty. My wife doesn’t always like it when I come home with bog muck on me, but it is worth it to make the photo. 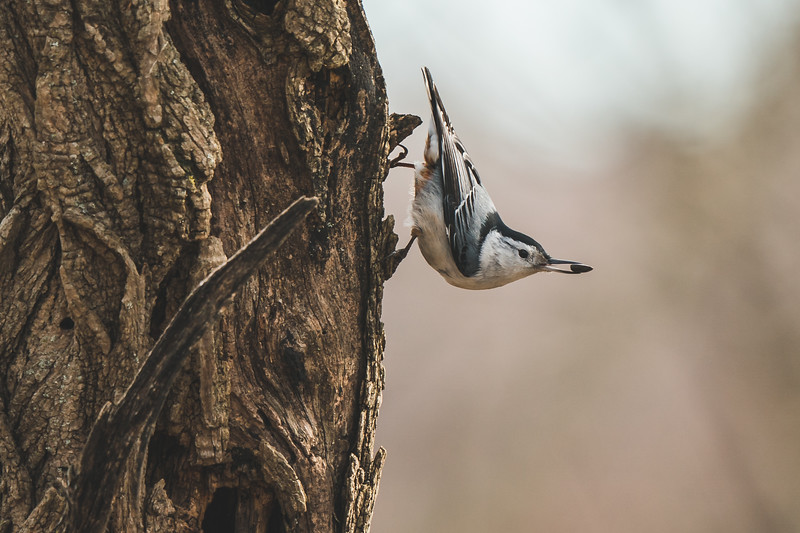 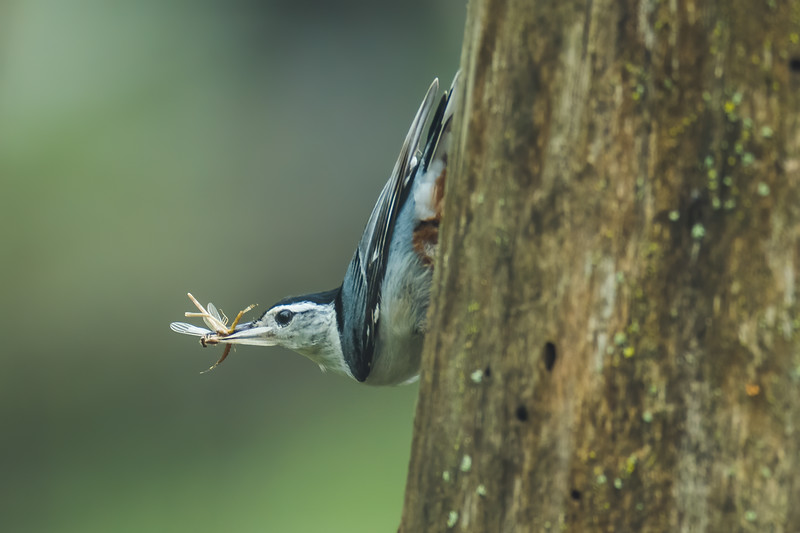 9. I like a nuthatch with food photo. Here are two that I liked from this year. I will be honest that I do not head out to the bog looking for these birds. They provide a nice photo though that you don’t expect to make. 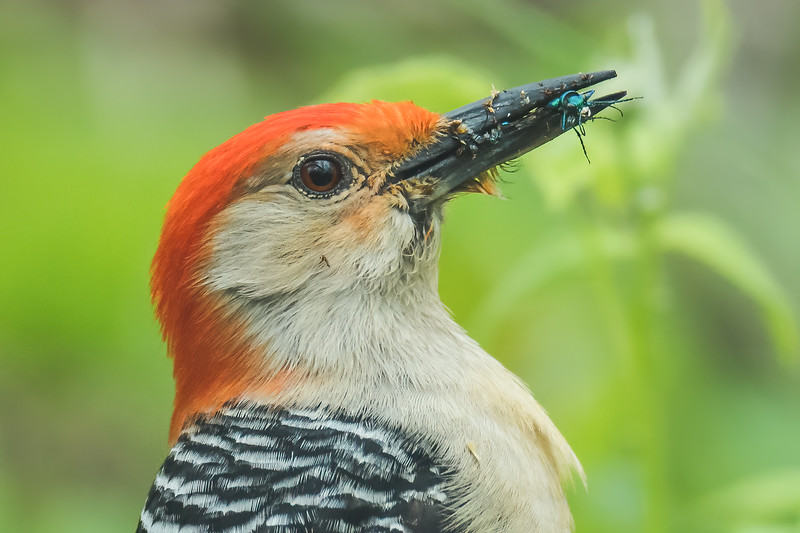 8. Speaking of food in the mouth here is a red-bellied woodpecker with a nice meal. I was walking out of the woods when I saw this bird eating. I got low and waited for it to look up after digging into a downed log. I really got lucky here. 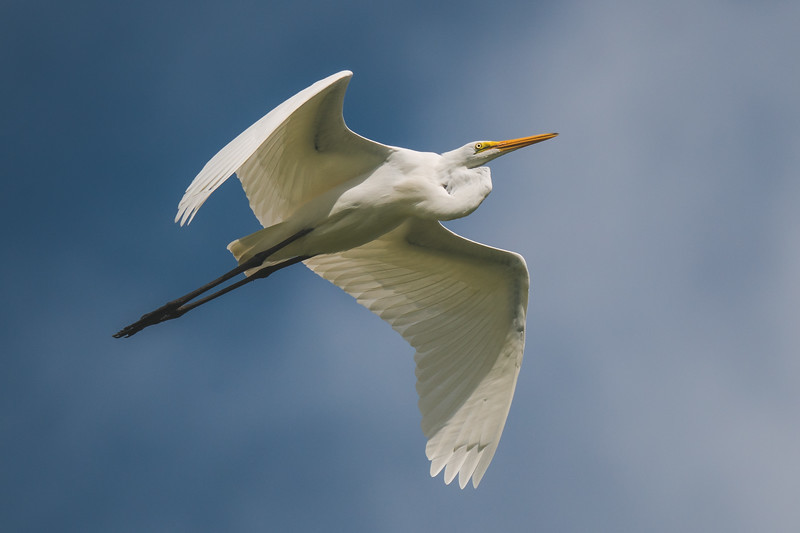 7.  This great egret gave me a great pass by with a nice sky. There were two of them fishing on the other side of the pond when I first saw them. I was going to go over and have a closer look, but I saw some photographers trampling through the woods to get closer to them. I knew they would flush, and it made sense that they would come my way. I sat down on the bench and waited for it. Sure enough they got too close and the birds came my way. I hate that they were flushed, but it did make for a nice photo. 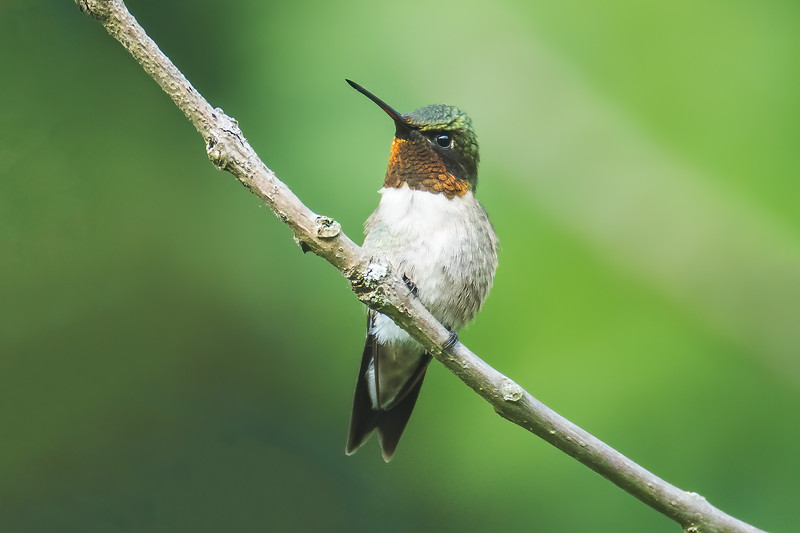 6. Normally I just make hummingbird photos at home. One day at the bog though this one came up and posed for me. I will never pass up a hummingbird photo so I made it. The background was perfect for a very nice photo.

5. This photo was worth waking up early for. I was at the bog at first light in the summer. That takes a lot of willpower for me. I love to stay up late and sleep in. Getting up early is not my favorite. When you can capture a green heron getting a meal in the early morning light though it is worth it. 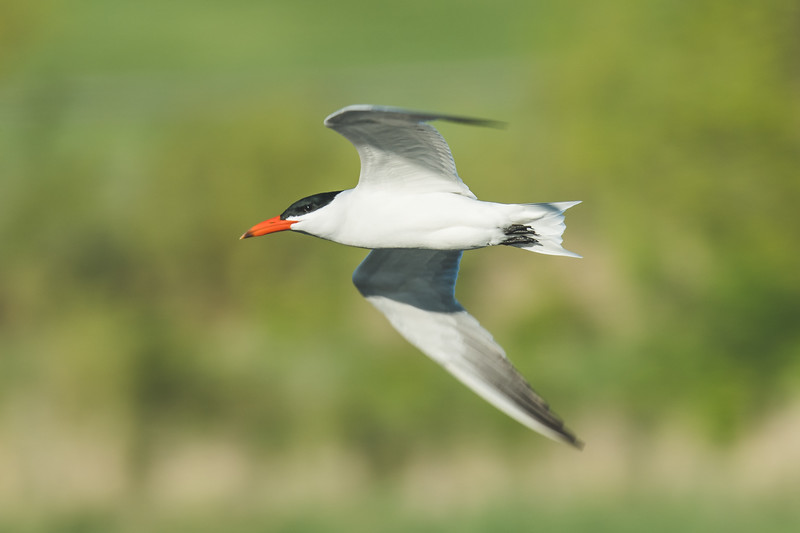 4. This caspian tern was only at the bog for one day that I knew of. I went there to photograph warblers, and then quickly switched to making bird in flight photos when I saw these birds feeding. I don’t see them often so it was a nice surprise. 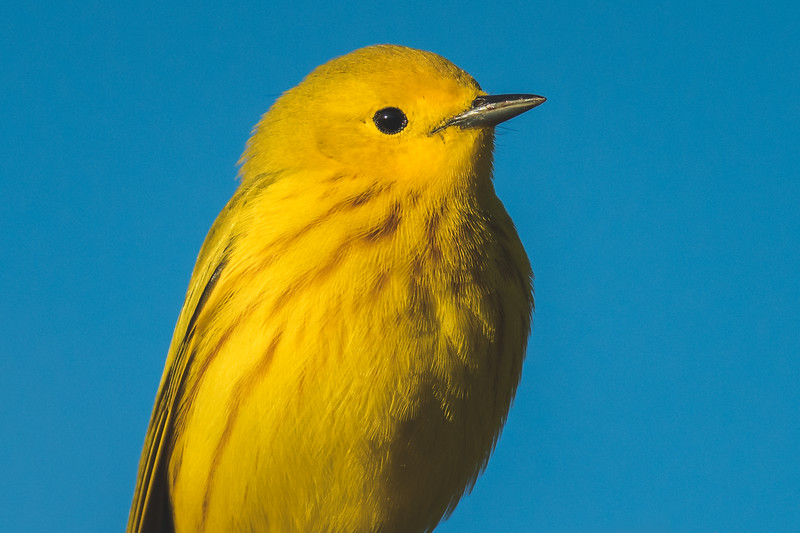 3. As I said in my warbler post a lot had to come together to make this photo. I watched this bird for a while hoping to get it against the blue sky. I was surprised when it flew closer and let me make this photo. As always when the bird does what I hope it will I moved on and left it alone.

2. I love a good photo of a heron eating. Here I was lucky enough to capture the heron flipping the fish in order to swallow it. These photos take a lot of patience most of the time, but they are worth it when you make them. 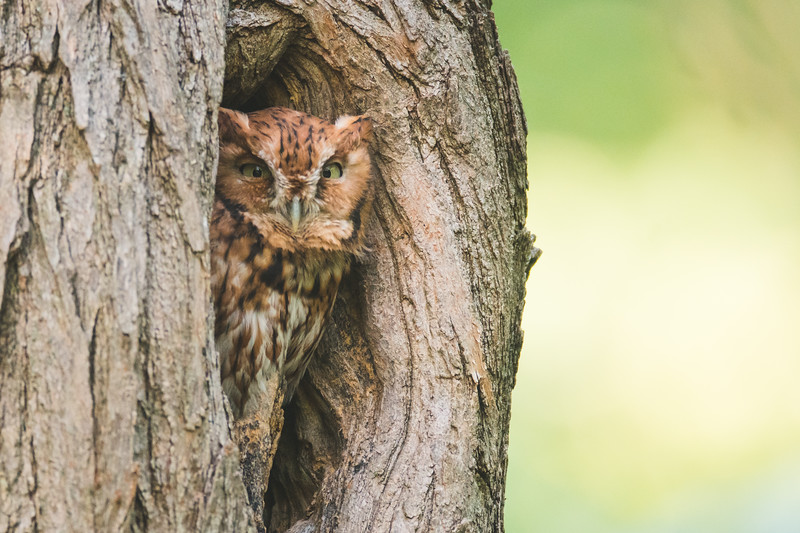 I spent less time at the bog this year than ever before. Many circumstances led to that, but it is what it is. At the end of the day though I was far happier with my images this year than ever before. I really enjoy the complexity of bird photography. It is work to make a compelling bird photo, but it makes it feel so good when you do make a compelling photo.