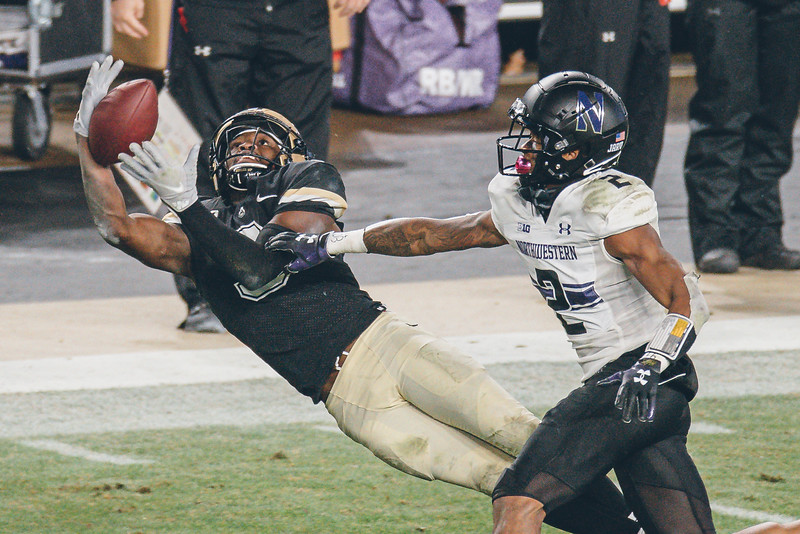 Before last night it had been over eight months since I was at a college sporting event. It felt weird heading to the stadium yesterday. I really never expected to be in there in the first place this year. It has been a crazy year for sure with everything coming to a screeching halt for me in March. As we hit Friday the 13th again I was expecting everything to stop again. It did not though, and I was able to get at least one game in this year.

This is my favorite photo of the night. I love the ball coming into the receiver through the train tracks. I have a photo with the ball closer to the athlete as well as a frame with the ball in his hands, but I liked this one the best. I thought it had a Willie Mays vibe to it. One thing that Willie didn’t have though was two men ready to hit him after he touched the ball.

History Has Its Eyes On You

The crazy thing about this game is that it was played nearly 25 years to the day of the first ever game I attended at Ross Ade Stadium. That game was against Northwestern as well. Last season I had thought about how cool this year would be down on the field with the rest of the photo team. Of course this virus changed a lot of peoples plans. We are lucky to have a season at this point. Just being in the stadium with the same two teams and Purdue in those classic uniforms was amazing. The fact that I was back where it all kind of started blogging for me was pretty cool. Just across the isle and down a few rows was where many of the first images for my original blog were made. I love it when everything comes together for a good story. It also meant that I really knew how to work this angle on the action. I had made photos at many games from about the same position.

I love Ross Ade Stadium. It was amazing to be inside watching football again. It was kind of weird with a virtual band and very few fans, but hey it’s 2020. I will take anything close to normal that I can get.

Last night I tried to guess the receiver that would be getting the ball, and that I could make a decent photo of them. If they were getting the ball with their back to me it would do no good. Up top you get a little better view of the field and it made it a little easier. You may guess wrong a few times, but if you wait for it you can make a photo that you like. 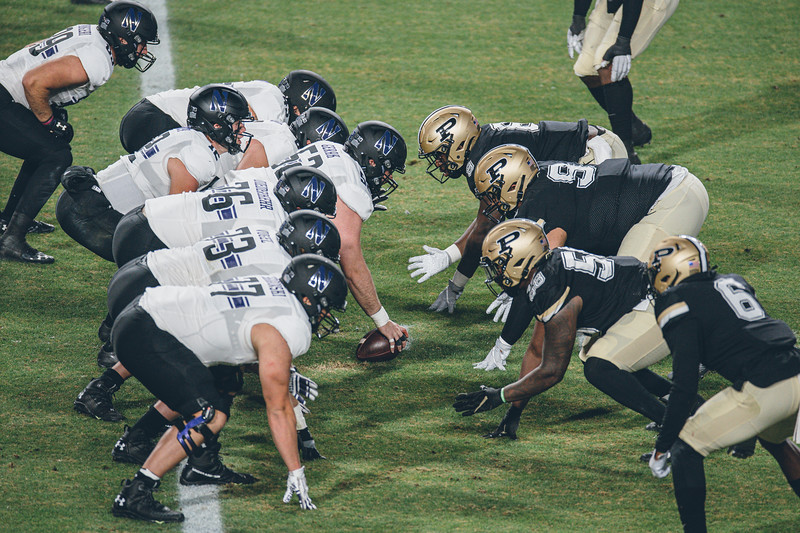 The Story Of Tonight

The upper position for making photos is a great piece to a puzzle. It would be a great addition to a photo gallery, but for the most part most of the photos are lacking the punch that you get by being on the field. At one point during the day yesterday I had thought about making an Exposure gallery for the game. After making the photos though I realized that the photo story would be missing a lot. Check out the Purdue Exposure gallery for the full look at the game.

I really have no idea what comes next. I have learned this year to just be happy with what you have. Anything else is a bonus. At one point we were not even going to have this season. To have had the games that we have had are a bonus. We found out last week that the next game could be cancelled at a moments notice. This virus has taught us all to be quick on our feet and roll with what is in front of us. I always talk about making photos like it will be your last game. This time that possibility seems much more real than normal. If this was the last time then it was a cool way to go out. My 600mm performed very well at the game, but with a little boom in the market for Christmas may be on its way out of my inventory. It got some use for sure last night.

Can you tell what I was listening to as I wrote this post? During this pandemic I have had some fun listening and watching this musical. At times I felt like Burr in the play. He sings about waiting for something that is out of his control. Later he talks about wanting to be in the room where it happens. Watching so many people covering sports I felt the same way for sure. It was nice to be in the room last night even if it was just for one game.