Great Light And Clouds At The Purdue Memorial Union

Last night I went down to catch the sunset at the Union. This location with the hedge is one that I have not exploited too much yet. I used to see it so much in other peoples photos that I ignored it altogether. At some point though I decided to visit the spot, but do something different with it. As I drove to my spot I realized that the clouds were moving in faster than I had hoped. Like the night before I through the Big Stopper on my lens to allow me to slow the shutter down. The fun then is trying to pick the times to start and stop the 30 second exposure. Sometimes you guess right, and sometimes a rogue cloud comes flying through to change things up. I thought that this was pretty good timing. 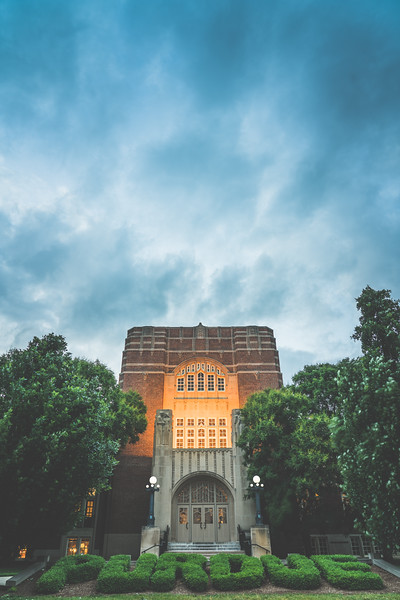 At some point though I decided to pick up my tripod and move forward across the courtyard. I wanted to change up my view. After all was said and done wish that I had stayed where I was. The lights came on, and if I had stayed back where I was I could have had an easy composite job as I was on a tripod. I also like the way the building looks from further back on the lawn. I have another idea with this building that I was pretty much scouting for here. These little things I learned last night will come in handy then.

Turning The Lights On

As the mist started coming down I started packing my gear up. Of course before I could even get my camera in my bag the lights on the stairs came on. I liked the look so I put the camera back on the tripod. I moved it slightly when I took the camera off of it so the photos did not composite well together. It was on to plan B. In Lightroom I grabbed the brush tool and made the circle the size of the bigger light cover. I cranked up the exposure and temperature and filled in the light. I repeated the process for the lower lights with a smaller brush size. The light were on, and I had what I would have if I had waited the rain out an extra minute.