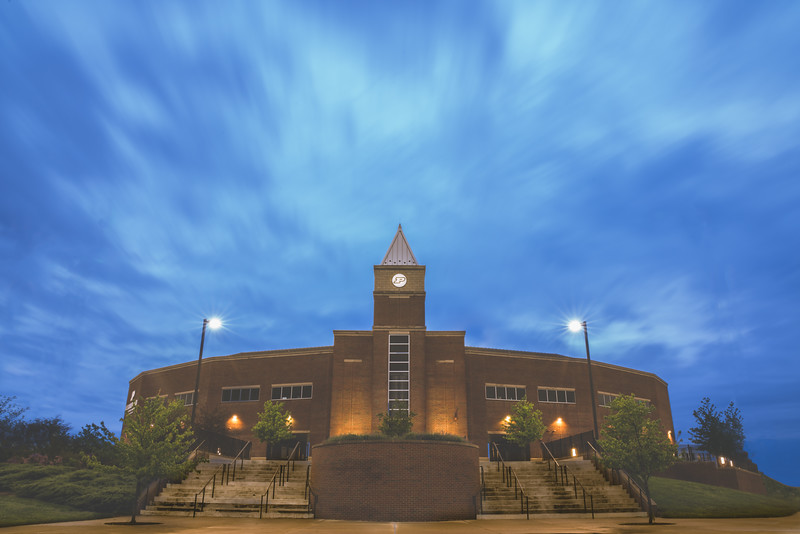 Monday morning I got up early because the conditions looked like they could be great for a sunrise photo. I knew that it was a low chance, but with storms you never know what you are going to get. Some of my best sunrise or sunset photos were made around a storm. Those skies are usually the best skies. The conditions failed this time, but the fast moving clouds made for an interesting photo with the blue sky.

Normally I have an easy time deciding between black and white or color for my photo. In fact I usually decided on site while making the photo. Sometimes that changes, but that is usually the case. This photo was a tough one for me. I loved the color version because of that blue sky. I had no thoughts of making a blue hour photo into a black and white. Just for fun through I ran it through one of my black and white presets. I loved how it looked, and suddenly I had a choice on my hands. Which one looks better? Let me know in the comments which one you prefer.

I really liked this photo when I made it. I had reservations about posting the photo right away though because I am about two thirds of the way through my ballparks of May project. One ballpark post a day is probably enough. Honestly probably too much for some. Here though is a case where I probably should have saved Alexander for last. I have already made some photos that I liked of the stadium since the post. In between making this photo and posting it I have found out that I will not see any baseball in the stadium this year. The one year visit by the Aviators was cancelled Monday night. That is too bad. One of my favorite places to make photos is off the list for the year. I can’t imagine a world where fall ball will be a thing this year, but that seems to be my only chance right now to make baseball photos this year.