Spending Some Time At The Celery Bog

I have spent a little bit of time over the last couple of days out at the Celery Bog making photos. With everything going on it is not the time that I wanted to spend out there, but any time out in nature is good. Wednesday night I went out late with the light being very low. In fact it seemed like it could rain at any time. That light while not optimal can produce very nice photos though. This photo above was made at around 8 o’clock with the light far gone. If you can steady yourself though the colors seem to pop even more because everything has even light on it. I made my favorite photo of the night that night on my way to my car to leave. The palm warblers have really started to show up, and they are all vying for equal time in front of the camera. This is a fun time of year.

The Return Of The Yellow Warbler

On my walk Wednesday I saw one yellow warbler that allowed me to make a quick photo of it. On Thursday I saw a couple more in a nice tree. The thing about wildlife photography is that there is a lot of luck involved. Part of creating luck for yourself is to put yourself in a situation for the luck to find you. To be out there ready for the luck is a huge part of it. As this warbler season picks up I will have to find more ways to be out there.

I made this photo on my way out of the bog on Thursday. Even though I wanted to get back to my car I was still looking for photos. This sandpiper along the water I knew would be a fun reflection photo. Once again the light was terrible, but it was enough for me to do something interesting. 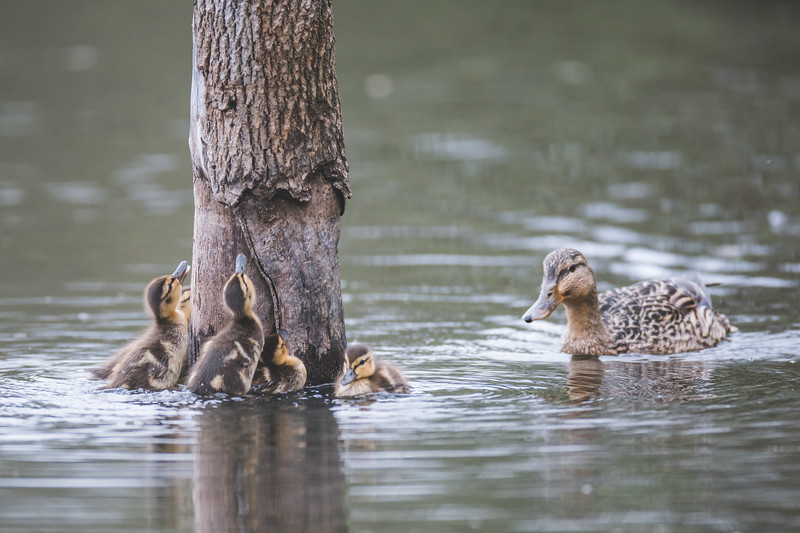 Can The Swallow Come Out And Play?

These baby ducks seemed to want the swallows that I photographed a few days ago to make an appearance. They were all looking up at the hole and trying to get up there. The swallows were gone though just showing how quick and amazing that nature is. The process of hatching and leaving only took a couple of days.

One thing that I really went out with in my head on Thursday was to come home with a variety of images. I did that a couple of ways. One of them was to find a spot with a few different backgrounds for my images. This gives me a chance to really change it up just by pivoting a little. Another way that I wanted to change things up was to make some small in frame photos. I have a very nice tight image of this blue-grey gnatcatcher, but this one showing a little of the greenery around it pleased me a little more. I like showing some of the surroundings of the bird. With the cropping power that 61mp gives me I could have cropped right in on this bird. I think that it is more pleasing though like this.

This is a warbler that I don’t go out to see, but it is nice when it comes to see me. They are very shy so going out to find one will probably leave you disappointed. They rarely give you a good angle to photograph them. This one popped up out of nowhere, and I quickly dropped my monopod down to get a lower angle. Once again I had the small in frame idea in mind as I composed this photo. I think that at the end of the day having a wide range of photos from a walk is a great thing.

While on the deck making warbler photos a Yellow-throated warbler kept taunting me by showing up too close to me. I never really came away with a photo that I liked of it. While I was being tormented by it a few common yellowthroats were working the edge of the shore. They were too far away to make a good photo of them though. This one though decided to come a little closer to me allowing me to make a picture that I really liked. Once again these are very shy birds that don’t often fly towards a fat man with a camera. This one did though.

This blog is about to get really busy. I have started a project showing a different ballpark each day. That post will hit each morning. I am sure that my warbler photography will continue as well. When I left the bog on Thursday I went over to the athletic complex at Purdue and made some photos that I really liked. I am sure that those photos will show up here tomorrow at some point. In this time when I feel that I am not busy doing my job my creativity has gone up. That is a great feeling to get out and make some images. When things started to slow down I was just not feeling it. I figured this blog would have to continue with old images being shown. Having so many that I needed to cram them together is a great thing. Hopefully we find a vaccine for this thing so we can start to get back to normal. Until then it has been fun coming up with new ideas for photos.