My 19 Favorite Photos From The 2019 Sycamore Baseball Season

This year my college baseball season began and ended photographing Indiana State. On the first of March I photographed the Sycamores home opener. It was just over a month later when I was finally able to see them again as they came to West Lafayette. Then of course the run in the Nashville Regional of the NCAA Tournament. It was fun getting to be a very small part in this historic season for the Sycamores. Here are my nineteen favorite images from this past season.

19. When Indiana State came to Purdue in April I tried to put the NCAA logo in the background as much as I could. I wanted to give them something to use when the NCAA announcement came in a few weeks. I liked this moment just before the game started.

18. I have photographed the motion of Triston Polley every way that I could imagine. With the low photo position in Nashville though I could add one more for him during his last college start. I just love the effort here that is why it makes it onto the countdown.

17. I love photographing catchers in their gear. They just look so cool. With a full set of stands behind them that look gets even better. Here I liked how everything blended together.

16. While in Nashville I tried to work as much signage into my photos as I could. I was not shooting for future use as much as I was for historical purposes. Putting the signage in the background helped that cause by telling the place. Here the light seemed just right for a black and white as well.

15. I made this photo early in my first game of the season. I love this vantage point for runners coming from second to third. If they are rounding the bag as Roby is going here it gets even better.

14. This one gets two photos. Luke Fegen and Max Wright teamed up for a double play at Purdue where I was able to have a decent angle on both sides of it.

13. Normally a blue sky is something that you want to show off. Here though I thought that it would look fantastic in black and white. Not quite the zones of an Ansel Adams photo, but it was the look that I was thinking about when I made it. 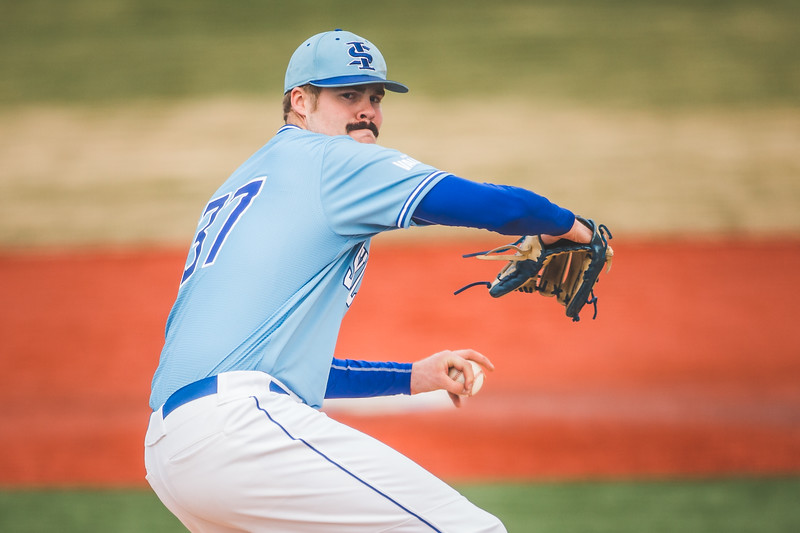 12. When I first saw the mustache on Tyler Grauer on opening day I knew that I had a good opportunity for a photo. I had a warm up photo that I liked, but this one of him with the grip on the baseball I knew that it would find its way onto this countdown.

11. This is the second time that I have photographed in an SEC stadium, but the first time that it was for baseball. Just before they took the field at Hawkins Field for the first time the team warmed up inside of the football stadium. I wanted to get some of the landmarks in for the photo gallery. The press box is of course a big one to get in.

10. Over the course of his career I have made many images of Tyler Ward. As he battled back from injury he took the hill at Purdue. I wanted to do something different with him so I slowed down my shutter speed. I liked the way that it conveyed a little bit of motion for me.

9. Collin Liberatore was spinning a gem against Vanderbilt as he came off of the mound. He was showing some emotion so I moved to a spot where I could nearly shoot him head on to get it. This was a big game, and a big time pitching performance.

8. The fans in the background of the outfield really add to photos. This one of Roby Enriquez celebrating a double was just enhanced by the fans in the stands.

7. Max makes the countdown again. Here he is greeted by his teammates in the dugout after scoring a run against Ohio State.  I don’t get this look into the dugout often so I try and take advantage of it when I do.

6. After shooting a lot of baseball over the course of a couple of days I was looking for ways to change it up a bit. With three cameras at my disposal one of them could be used for slow shutter speeds without missing a big play. Here I knew that Clay Dungan would make contact and run towards first so I had my camera ready to make the image.

5. Before the final game of the season I saw these players hanging out on near the bullpen. I went into the pen to get this shot of them with the beautiful sky overhead. Sometimes things just works in your favor. Here everything seemed to fall into place to make an interesting image.

4. As Indiana State was preparing to start their NCAA Practice the skies opened up. What I thought would be a little rain turned into a downpour. Shooting across the field let me make an image that wasn’t the best normally, but with the rain it turned into an interesting picture.

3. The white batting gloves that the Sycamores wear can come in handy at times. Here they gave me a little fill light into the face of Dane Tofteland as he was in the on deck circle for the Sycamores. These are the images that you plan to make on game day, but when they happen in front of you it is a great bonus.

2. Jake Means had a great season for the Sycamores. Here he is greeted at home plate after hitting a home run on opening day. I loved this image so much from the moment that I made it. I really thought for most of the season that it would be #1 on this countdown. It would take something pretty cool to knock it off.

This was a special season for the Sycamores. They were poised to strike, and they did. I really think that had they not been paired with the #2 team in the country that they would still be playing now. This was a special club that I was happy to get to see play a few times. It will be fun watching the seniors play in the minors as they chase their dream of being a big leaguer. Maybe I can see a few of them sooner rather than later.