Indiana State Gives Vanderbilt A Run For Their Money

When this NCAA draw was announced I wondered how Indiana State could be paired with Vanderbilt. Vandy is the #2 team in the country, and Indiana State was far from the bottom of the #2 seeds for this tournament. Vandy is a tough team to get through to get on to the next round. This was a great game all around that for a moment at the end I thought that ISU would pull out the win. They had Vandy scared. With the bases loaded and no outs I started thinking about my plans for the future. The big hit did not come though. That is baseball. As I write this they are preparing to play Ohio State in an elimination game with another shot at Vandy on the line.

This was a strange game to photograph. The stands were packed so you couldn’t get much moving around up there. The two photo wells on the left side of the infield were off limits, and the photo well by first base was packed with photographers all pointing cameras different ways. I spent most of my game in the team photo well by the Indiana State on deck circle. At some point through all your photos start to look the same. I decided to try a pan to break up the gallery a little. With three cameras I still had coverage with two if I took one and slowed it down. Luckily for me I got the panning shot that I wanted on the first batter that I tried so I could have everything back up to sports speed.

For the past couple of trips I have been having some fun making panoramic images of the stadiums that I have been visiting. I haven’t been taking my 11-24mm lens out so I have to stitch some images together with my 24mm lens to get an ultra wide look. Here I made three separate images and then Lightroom did the rest. This was basically my view for the majority of the game. Not bad huh? 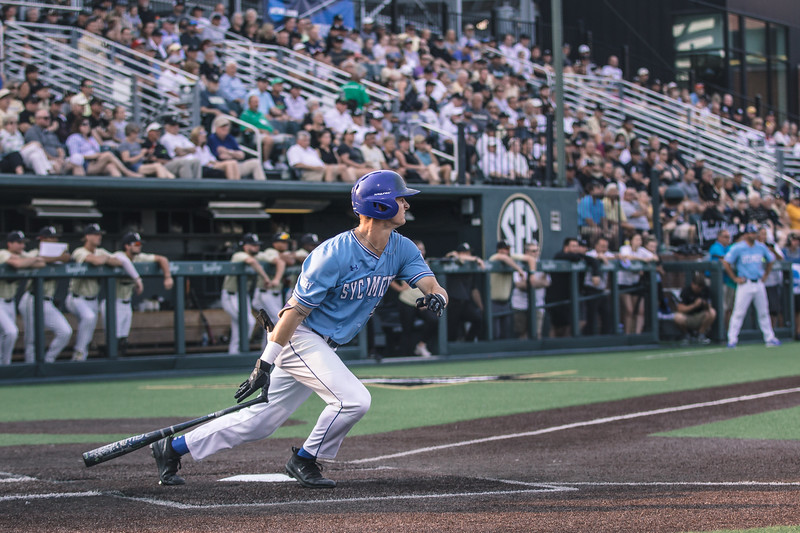 This was a photo that I knew what I wanted, but stuck in the middle of other photographers in the photo well I could not get it. I made a few trying to get close, but it just wasn’t working. When the photographer on the end moved to another spot during the inning I quickly took his spot and made the photo that I had in my mind.

This tournament and everything pretty much made up my week. When I wasn’t at Hawkins Field for the tournament I was at another ball field. You can see my favorite images from last week here.