Spending Then Day At The Celery Bog

Thursday with warbler season in full swing I decided to spend my day at the Celery Bog. I spent way more time there than I should have, but I had fun. Twice I shot through downpours, and as I did it I thought about how much I would have been complaining if I was on a job. Actually as long as my gear is covered I like a little rain. It can add to your photos. A little fog at the beginning of the day made for some different photos too. I made this image looking back at the bog from the road. The fog added a little extra drama to a fun photo.

For the last few months I have walked around the bog with my 600mm and a 2x teleconverter on it. This gave me a 1200mm reach which for birds is amazing. It really seemed to slow my focusing speed down though. When I got something I had a cool shot. It seemed like I was missing too much though. With warbler season in full swing I knew that I needed to be fast with my focus. With that in mind the tele came off the camera. I really think that my photos have improved since doing that. When I haven’t been as close as I would like to be I have found creative ways to use negative space. I think that I have made far more keepers this way. 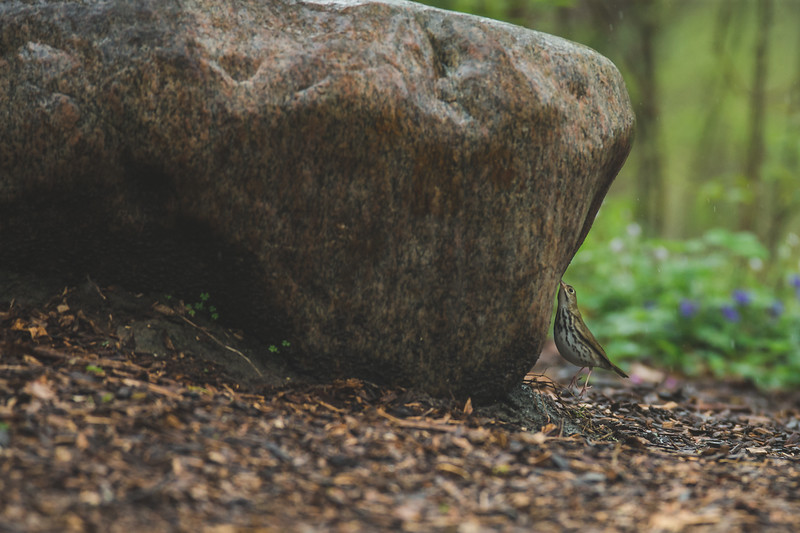 Like this ovenbird I often feel that I am trying to do too much too soon in my photography. I consume so many great wildlife photos that I expect all of mine to look like that. I walked away from my trip to the bog Thursday disappointed. When I got home I realized that I had seen over 60 species of birds including some for the first time ever. It was a great day for birding. I really didn’t come away with an amazing photo though. I did have a great time including some adventures in getting around the bog. I am slowly learning this game, and I feel that with so much info coming at me early on I was overwhelmed. Now that everything is not so new I can takes bits of info and make decisions based on that. That has helped me become a better birder, and by default make better bird photos. Later today I will put up another post from my walk on Friday. I did not have nearly as much time, and I made far fewer photos. What I made though were photos that I really liked.

One Reply to “A Days Work At The Celery Bog”