The day started off for me across the street by the Neil Armstrong statue having some fun at the BTN Tailgate show. I really did not know that I would attend the entire thing, but the thought of free Mary Lou’s donuts was too good to pass up. I had a great time just hanging out, and also making a few photos. These are very cool events, and it would be cool to see Purdue host College Gameday soon. Maybe there is a matchup worthy of the show coming to town next year. I was living in Iowa the only time that Gameday was here in the past. I would love to see them on campus soon.

Saturday was a double senior day for me. I covered the final home games for both football and volleyball at Purdue. Senior day is always a bittersweet day. You have young men and women playing their final home games which is sad. College is a short stay though so they are on to bigger and better things. Those things may be in professional sports, or they may be out in the real world doing good things. There are some football players that I know will be doing good things out of school after they pick up their degree. 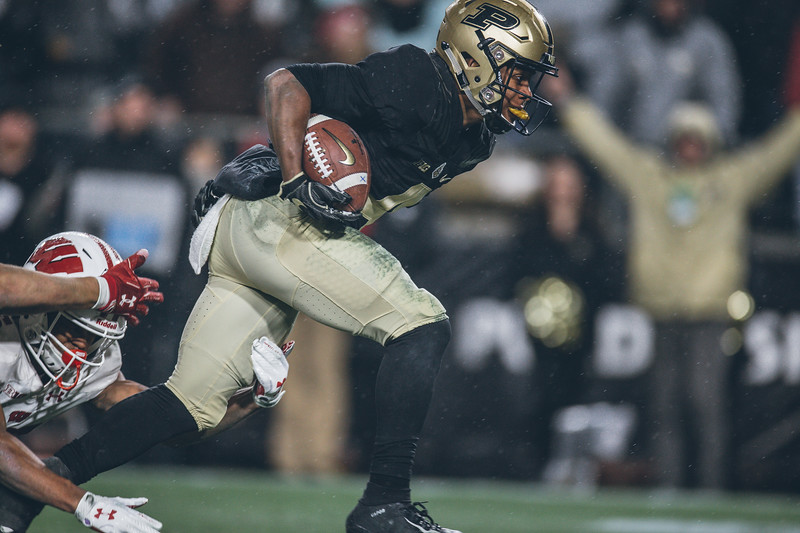 How Did It End?

I had to leave the game after the second overtime to get to volleyball. As far as I know this game ended in a tie after two overtimes. I think that in a way it is good that I left when I did. That way I do not have a mental image of how things ended. No matter what I still had a great day on campus making some fun photos.

Of course I really know how the game ended. I really had hoped for a win so that Purdue would be bowl-eligible over the last two games for very selfish reasons. I want to see a bowl game for Purdue. If you had told me that at this point of the season that Purdue would have played Wisconsin into three overtimes, beat OSU handily, and be one win away from a bowl game I would have taken it. I have a lot of faith in this coaching staff, but they lost a lot of players from last year’s bowl team that won seven games. To even be in that same position again is pretty good. When Brohm gets his guys here with some depth this is going to be fun.

The End Of Six Seasons In Ross-Ade

When I walked out of the stadium Saturday I was in a huge rush. I had to get changed and get to volleyball. The game was still going on, but I couldn’t help but to reflect a little. When I left the field for the last time the previous five years I had to wonder if I would be back the next year. I always felt like shooting there was not a given for me. This year as I walked off the field I couldn’t help but think about how much I can’t wait for September 7th next year when I can be back there. This season is not over yet. I think that Purdue has two games left to play. The home season is over though. I really cannot wait to shoot in Ross Ade again.

The Return Of Dustin Keller

I really loved watching Dustin Keller play football. Many, many years ago I was a tight end so I always root for the position to get some love. One of my favorite Boiler tight ends was Dustin Keller. That man could play the position. It was really fun seeing him back on campus to lead ‘Shout!’. I had no idea who was doing it, but I was changing ends of the field when they announced his name. I picked up my pace a bit in order to grab a photo or two.

Once again I will say that Purdue has put together an awesome crew for game photos. This year has been so much fun because the crew is so much fun to be around. You can see the final home gallery of the year here. It has been really cool to be such a small part of this crew every week.

Last week was very much how I like my weeks. I was busy. I had some individual shoots early in the week followed by five sporting events over the four days that I am calling the weekend. It was a fun week to make photos. You can see my favorite photos from the week here on my Exposure page.

I will be completely honest. I am not ready for football season to be over. I have only shot ten games this year, and I want more.