This was really a tale of two seasons. The first half of the year was an interesting one in which the team really seemed to struggle. At the beginning of 2018 a coaching change was made, and this team really took off. That run at the end of the season was so much fun to cover. This team really started playing well, and that just makes for good photos. Here are my eighteen favorite images from the 2017-2018 season. 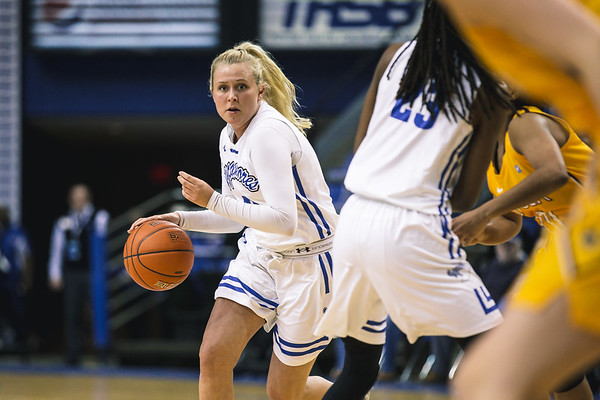 18. On senior day all of the seniors started the game. Freja Christensen got the nod on senior day, and seemed to be having some fun out on the floor. Here she dribbles through a screen looking to make a pass. It was fun seeing her get some minutes with her family in the stands. 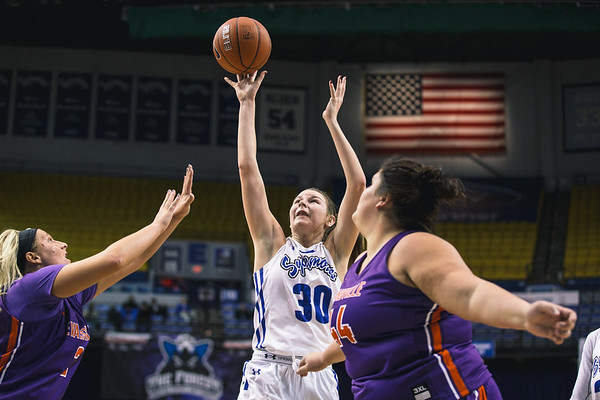 17. Regan Wentland is a player that you never have to question her effort. She always gives her all, and is going to be a key player returning next season. Here she gets a shot up against Evansville to help give the team their first MVC win of the season. 16. I had to get one photo in here of Ashely O’Neal getting a three up. She was money during the season from behind the arc. When the team needed a big three they could count on Ashley to nail it.

15. This photo of Alexis Delgado was made during the final game that I shot for the team this year at Southern Illinois. It was basically a preview of a matchup that would happen one week later at Hoops In The Heartland. This team really battled back to finish fifth in the conference. From the way that the season started you would never have guess that it could have happened.

14. Ashley O’Neal has the nickname ‘Biggie’. I am sure that it has to do with her size, but you would never guess it to see her on the court. She is fearless in the way that she plays the game. Here the sophomore drives the lane against a much bigger opponent. It seemed like she would need stitches every game after going in the paint, but it never stopped her from doing so. She will be fun to watch grow over the next couple of years.

13. I love the little quirks the players have at the free throw line. Here senior Wendi Bibbins takes the ball from hand to hand just before shooting her free throw.

12. I have been pretty clear over the years that I love covering women’s basketball because of the hair. The movement of the hair is another way that I can convey motion. I love catching players with their feet off of the ground. If I can do that with a little hair in motion then my job is easy. Here the hair of both players tells a story.

11. The game at Illinois was a fun game to photograph. The lighting was pretty cool which is always a plus. It was the second game that I covered for the team during the season, and already the second road game of the season for me. I love going on the road with the team, and I am glad that they care enough about the program to budget for road games. Here Maryam Wilcher battles for a rebound during that road game.

10. Tierra Webb is a player that the Sycamores will be relying on heavily next season. She can create which is important at this level. Another year of maturity should help her round out her game. When she is on she is a difference maker in the game. 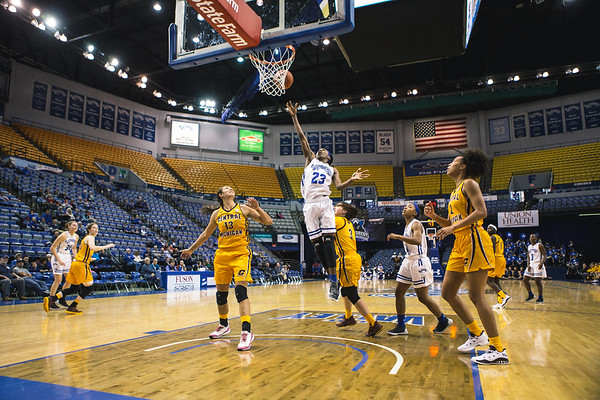 9. One player that has been fun to shoot the last two years has been Wendi Bibbins. Early on I loved the way that her hair would spray out as she made a shot. Her hard play though made for great images every game. I will miss making those next season. 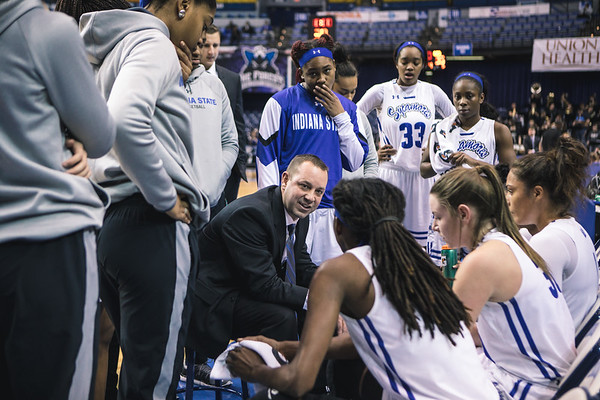 8. Coach Josh Keister was basically given an impossible task at the beginning of 2018. He was given the reigns of a team that was not playing good basketball already in a decent hole in conference play. He turned the season around, and got the team into the top half of the conference. It was a great job of coaching for sure. I hope that when the coaching job is decided upon that Josh is a big part of that conversation. I don’t know him well personally, but judging by a few factors he has to be a great guy. This team trusted him and played for him. That is a very important thing. Also seeing the way that his family came out to the games and rooted him on shows you what kind of a person that he is. If you can’t tell by reading this I really want him to stay on at Indiana State. If that happens I think it would be a good thing for the program. If for some reason he does not then I hope that he finds a good job somewhere. He has made a fan this year for sure. 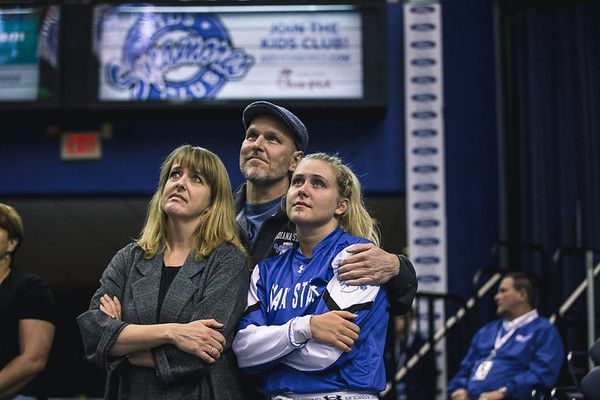 7. Senior day is always hard to cover. You have all kinds of emotions which makes it easy to make pictures though. The hard part is that you are saying goodbye to seniors. The moments can be good though as you can see above. Here Freja Christensen and her family watch her senior highlight reel. 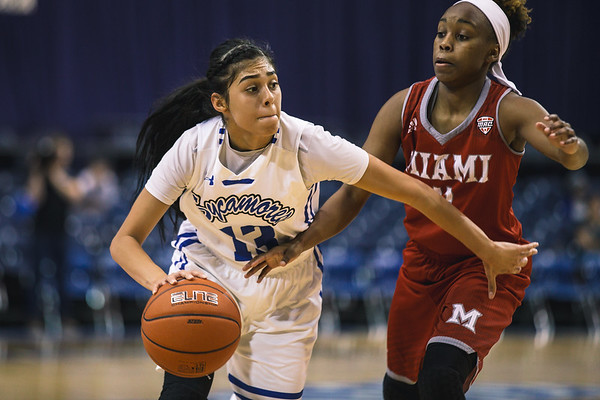 6. Another Alexis Delgado drive. She is a player that really can come off of the bench and spark her team. Every team needs a player like that. She provides big minutes off of the bench that help the team make a run with key players out.

5. Here Freja and Coach Keister’s daughter share a moment on senior night. The hard part as a photographer is to capture the moment without getting in the way of it. Here I was able to sneak in to make the photo. This is the kind of emotion that you just can’t get enough of.

4. Wendi Bibbins, Freja Christensen, and Ashley Taia all came to Indiana State with different stories. They left on a high note as the team beat Loyola to close out the home season. Here the seniors post one last time on the court at the Human Center.

3. Here is another fun senior day shot that I did not expect. Every game during intros Wendi Bibbins would come out very serious and flex during pre game introductions. Here she came out with a big smile. I may like this photo so much because it is so different from the others that I made during the season. You can also see just how much fun this team was having as the season was coming to a close. 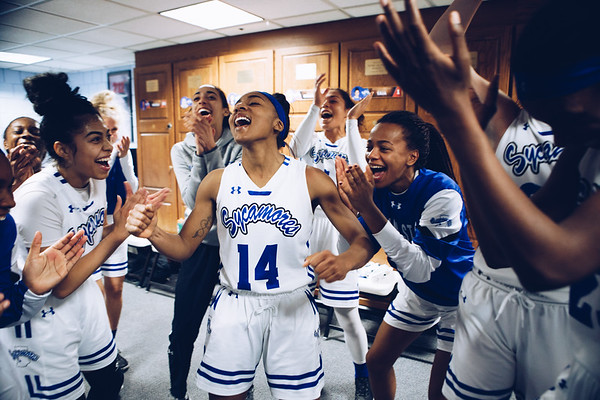 2. This photo could easily have been number one on the countdown. It was the beginning of the new calendar year with a new coach. The team came out and got an easy win #1 for Josh Keister. In the locker room the emotion poured out as they celebrated the win. These are the moments that you shoot for. The action shots all start to look the same at some point during the season. These moments of joy though are why I do this. This was a great moment that the team deserved. 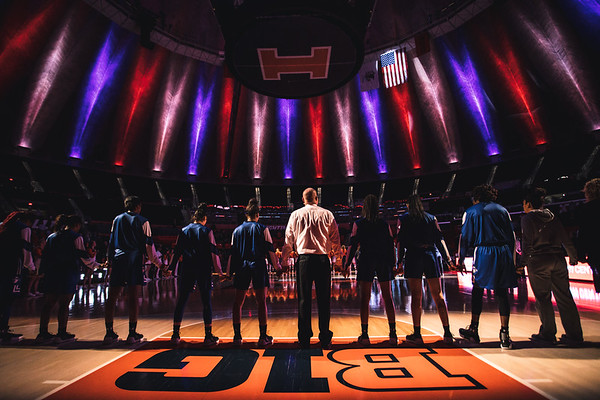 There are my favorite shots from this past season for the Indiana State women’s basketball team. This was a season that turned out to be very rewarding to me. You could watch these kids grow as the season went on, and isn’t that what it is all about? The change from the first game I shot at IUPUI to the way the season ended was something else. I can’t wait until we can do this over again next November.