Purdue Sweeps Iowa State to Move on in the NCAA Tournament

Thursday night Purdue started their NCAA journey against Iowa State at the Hearnes Center in Columbia, Missouri. The beginning of the match did not look good for Purdue. They basically were the #3 seed in this pod even if the NCAA wouldn’t put a number on that. Off of the bat Iowa State came out firing and took the lead. They seemed to lead the entire match until it was tied at 24. Purdue ended up taking the set 26-24, and at the time I thought that they stole that one. Iowa State played Purdue tough in set two as well, but Purdue came away with another win. After the break we saw a Purdue team that I hope we see for a couple more weeks. They came out with a mission, and put Iowa State away about as easy as you can in a tournament like this one. This team played great, and gives me hope that I will see them play long into the postseason. Of course I write this before the match against the host school Missouri. A tough opponent awaits, but if they play as well as they did last night I have a lot of faith in this team. 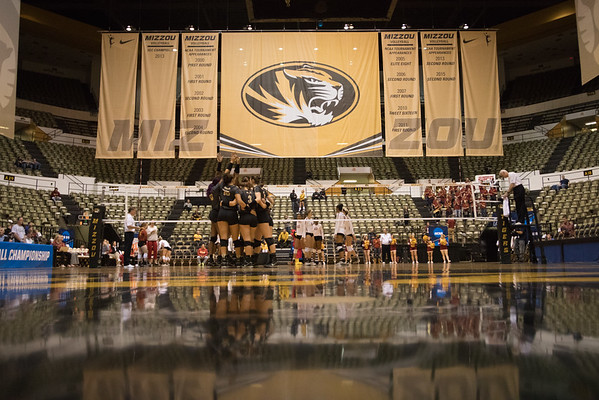 Photographing in the Hearnes Center

On an otherwise great day the one downside was the crazy photo restrictions put into place in the Hearnes Center. They only had a couple of places to shoot, and some of those had a blocked view of the action. What made things even worse was the fact that the shooting locations seemed to be changing by the minute. As the action was about to begin, and the teams were meeting at center court I was told that the spot I was supposed to be in was no longer a shooting position. I asked if the high position was, and was told that it was. No problem then I will move up high. When I got up there I really liked the position. It allowed me to make some nice pictures that made the athletes look like they could really jump much higher. Three plays later I was approached and told that this was not a spot to shoot from. In an empty arena they were worried about photographers being in the stands. Once again the final positions picked were obviously not picked by anyone who knows anything about photography, but what made things worse was the fact that it seemed as if the plan was constantly changing. In an arena that is fairly unique they gave us positions where we really could not show that off. With that said you make the best of what you are given, so I focused more on the emotion from the courtside seats.