My Favorite Photos From the 2016 Racing Season

One aspect of my photography that I am trying to improve on is my racing photography. I don’t spend much time around the tracks so it is hit or miss when I cover an event. This year though I was lucky enough to cover my first NASCAR races at the Brickyard. Covering a NASCAR race is pretty cool, but it featured two of my favorite drivers when I watched more racing. Tony Stewart is an Indiana boy who is currently running his victory lap of the circuit. Jeff Gordon came out of retirement just in time for me to photograph him. Last year I missed the opportunity, and this year I was able to make a dream come true. As you look through this list realize that it is made up of my favorite images. A lot of bias goes into this countdown, but it is what makes these lists fun for me to come up with. So here are my favorite 16 racing images from 2016. 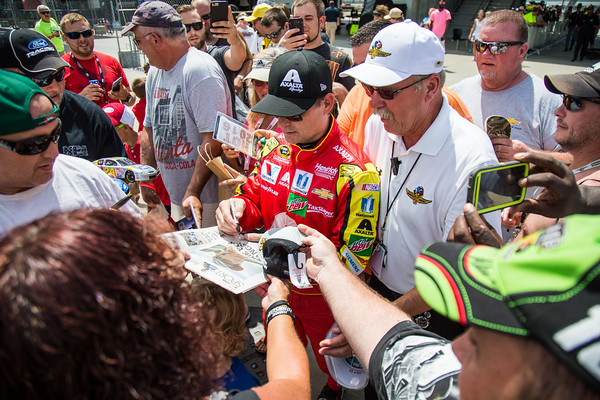 16. Chalk this photo up to a little luck. While walking on pit road after Cup qualifying I saw Jeff Gordon walking towards me. He was the story of that weekend so I turned around to follow him through the crowd. I knew that they would stop and ask him for his autograph, and I had an idea for a picture. Here is that picture.

15. During the Brickyard 400 I had some time on my hands. It is a long race, and without the special hot pass I could not shoot in many locations during the race. I was tired of the couple of trackside spots that we were allowed so I made my way into the stands to try a few things. I liked this photo of the couple tethered together with their headsets. A cool moment that I liked from the day. 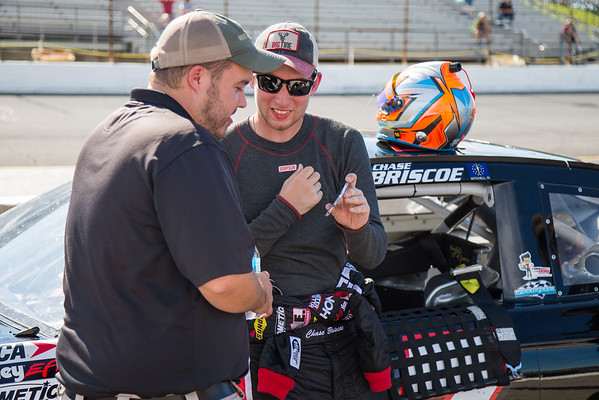 14. Everyone is on their phones now. Here eventual winner Chase Briscoe shares a moment on his phone with a crew member just before going out for qualifying. Part of the reason I like covering ARCA races is the fact that the drivers are happy with what you make of them. They enjoy the coverage, and that makes it easy to capture moments like this one.

13. Jimmie Johnson is now a seven time Cup champion. He is someone that millions of people look up to. He is also a dad. I think that is why I like this photo so much. We both have little girls that we adore, and I only wish I could take mine to work with me. Maybe someday she will roam the sidelines with me. 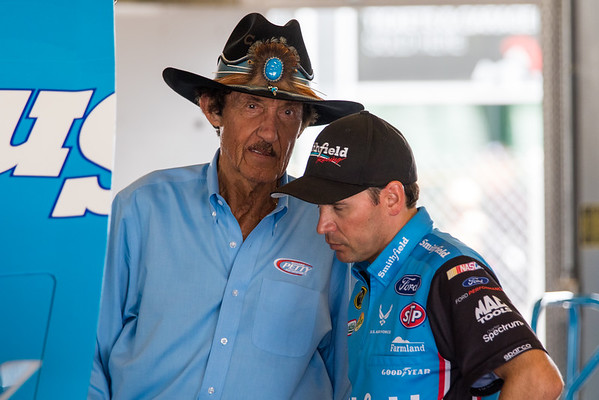 12. This is the first photo that I made in Indy covering the events leading up to the Brickyard this past year. I was roaming the garage area looking for possible shots, and getting the lay of the land. I saw Richard Petty the “King” of NASCAR in the garage area, and I knew that it would be a cool photo. It is not often I get to photograph kings after all.

11. As the weekend moved on you knew that it was an inevitability that Kyle Busch would win everything at the Brickyard. He was so much faster than everyone else. Late in the race I made my way up into the upper deck to make a shot of his pit stop. I knew that I could add a tilt shift effect later and make something really cool.

10. For the past couple of years I have gone to the Indianapolis Motor Speedway on the Thursday before the Angie’s List Grand Prix to photograph the practice. The nature of the road course allows me to get a few looks of the cars, and it is just fun to do. Here I was using my friend Trevor’s 70-200mm lens to make some panning shots of Scott Dixon as he made his way around the track. 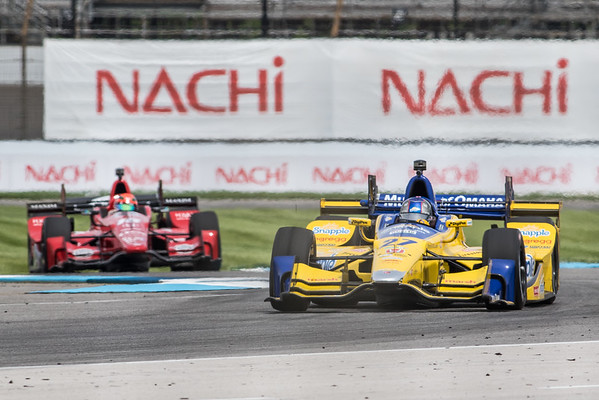 9. Here is another view of the IMS road course that I like. This series of corners allows me to make a few kinds of different photos. Here Marco Andretti leads the way through during practice. A little known fact here is that during stoppages in racing they also have a mean pulled pork stand out here.

8. Kyle Busch as I said before was the man to beat during the Brickyard 400 weekend at IMS. Here he celebrates with his crew after winning the Xfinity race. The victory lane credential is one that covers both races over the weekend. I could not get one, so I made my way directly across the track from Victory Lane to make this photo. 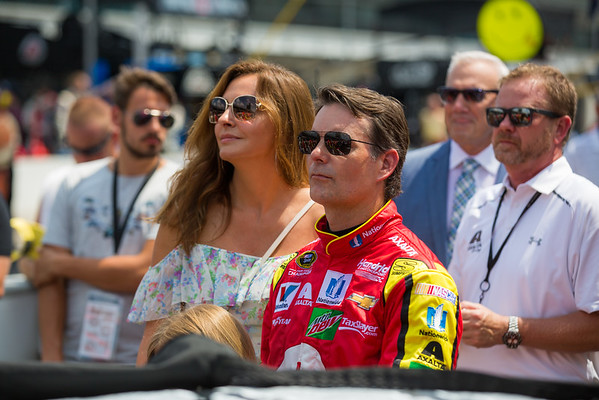 7. As I have said before Jeff Gordon was the story during the Brickyard 400 weekend. He was filling in for Dale Earnhardt Jr., and the media was all around him. I tried to find a few different angles of him during the weekend, but I also like this shot of Jeff and his wife Ingrid before the race. 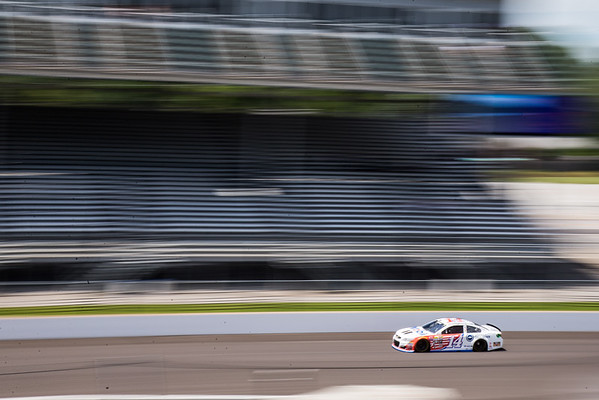 6. Another story of that Brickyard 400 weekend was the last race of Tony Stewart at IMS. He grew up in the shadow of the track, and he is a fan favorite. I set out on practice day to make an interesting photo of Tony on the track. This is one that I liked from my early efforts. 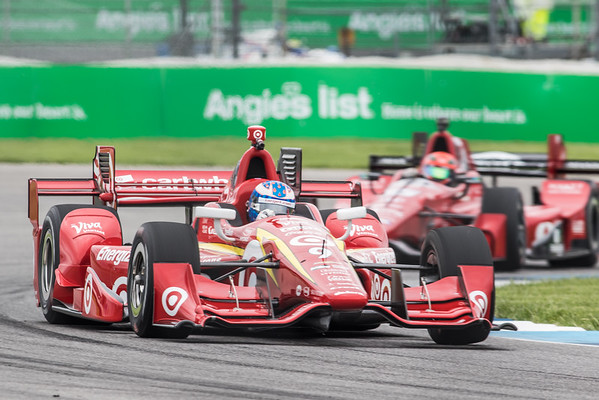 5. When photographing a race called the Angie’s List Grand Prix you would do well to place your subjects behind something with the race name on it. Just off the famous IMS straightaway was this great series of corners with the Angie’s List signage behind it. I liked the shots, and apparently so did the people at Angie’s List. They were very curious where this was as their photographer could not find it. I let them know, and hopefully they got some images from the corner. 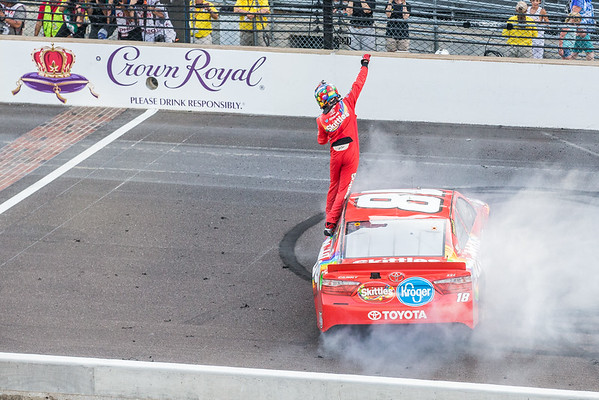 4. Yet again here is another photo of Kyle Busch winning in Indy. He had a great weekend winning both poles and both races. This is the moment after he won the Brickyard 400. I jumped out of his car and pumped his fist in the air. It was the end of a very dominant weekend for him. 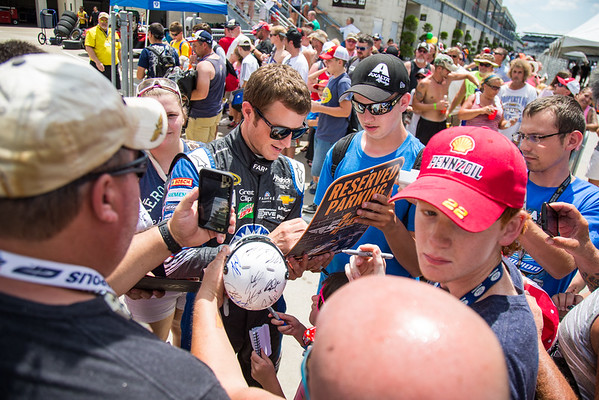 3. I set out with a photo like this in mind when I made my way to the Brickyard. The scrum for autographs is interesting, and I was lucky to make this photo. The encounters were very quick, and you had to surge with the crowd. I made a shot for my portfolio thought and I was very happy with it.

2. After the Brickyard 400 was over usually the winner celebrates in front of the fans. Kyle Busch zipped right by us, and I was wondering what he was doing. I quickly looked to my right and saw Jeff Gordon and Tony Stewart running side by side during the cool down lap. It was one last lap for both drivers around the historic track. It was a gracious move by Busch in allowing this, and very cool to see my two favorite drivers making one last lap.

1. As I said earlier I had a couple of portfolio shots in mind during the race weekend. One of those was to make a good panning shots of Jeff Gordon to put in my portfolio. I found these empty bleachers during practice, and knew that with a slow enough shutter speed I could make them melt into a smooth series of lines. I made my photo, and it sits proudly in my portfolio now. Racing is a fast sport, but sometimes it looks better at 1/30th of a second.

So there are my 16 favorite racing photos of 2016. I really only photographed two weekends of racing this past year. They were both fun weekends though, and I would like to photograph a little more next year. We will have to see what the schedule allows when the time comes.